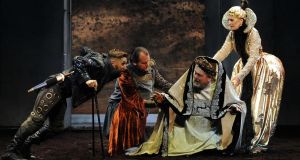 BEST ACTOR Cillian Murphy for his role as Dad in Grief is a Thing with Feathers, a Complicité and Wayward Production. Co-produced by The Barbican, Cork Opera House, Edinburgh International Festival, Oxford Playhouse, St Ann’s Warehouse and Warwick Arts Centre. In association with Landmark Productions and Galway International Arts Festival

BEST SUPPORTING ACTOR Owen Roe for his role as Claudius in Hamlet, a Gate Theatre production

BEST ACTRESS Sarah Morris for her role as Nannie in The Lost O’Casey, an ANU/Abbey Theatre production with Ictu, Forsa and Siptu

BEST SUPPORTING ACTRESS Rebecca O’Mara for her role as Dee in Furniture by Sonya Kelly, a Druid Theatre production

BEST LIGHTING Kris Stone for How It Is, a Gare St Lazare Ireland production

BEST SOUND Mel Mercier for How It Is

JUDGES’ SPECIAL AWARD Monica Frawley is one of Ireland’s most innovative and original theatre set and costume designers. She has worked with all the major Irish companies over 30 years and has made memorable work for the plays of Tom Murphy, Marina Carr, Brian Friel and Frank McGuinness, among others

SPECIAL TRIBUTE AWARD Owen Roe, for a body of work which includes many memorable roles in theatre, particularly for Rough Magic and the Gate Theatre

AUDIENCE AWARD Asking For It, produced by Landmark Productions and the Everyman in association with the Abbey Theatre and Cork Midsummer Festival.