Peter Crawley’s analysis: It was a big year for villainy as Richard III took top honours 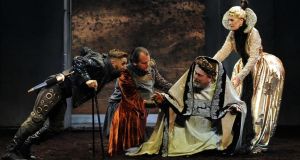 Now is the winter of our discontent made... if not quite glorious summer, perhaps a more agreeably temperate spring. After a cold snap of criticism and controversy, in which an entire industry seemed to push back against the Abbey’s programming policy in January, followed by recent signs of engagement, the first industry-wide get-together of the year at the 22nd Irish Times Irish Theatre Awards seemed determined to make everyone a winner, with a noticeably even spread of accolades.

By one reading, though, it was a year that belonged to Richard III, something that will have pleased nobody more, and surprised nobody less, than Richard III himself. After all, this was a man who, in Shakespeare’s version of his legend, eyed up his own prizes with so little shame he seduced one of them over the corpse of her lover.

In an era that is hardly short of such figures, here was another hypnotic villain, distracting the multitudes while bending reality to his will

Druid Theatre Company’s marvellously twisted and charismatic incarnation of the last Plantagenet king, in co-production with the Abbey Theatre, secured this year’s award for Best Production and didn’t stop there. That the show’s entrancing aesthetic was so justly recognised, with awards for Best Set (for Francis O’Connor) and Best Costume (for O’Connor and Doreen McKenna) underlined a Richard for the times – where characters appeared dazzled by their own gilded, glittering images, while much more septic horrors churned behind them in an industrial abattoir. In an era that is hardly short of such figures, here was another hypnotic villain, distracting the multitudes while bending reality to his will.

Otherwise, this year’s awards were shared out far more magnanimously than Richard would have allowed. Caitríona McLaughlin was awarded Best Director for her brutally stark and poetic production of Marina Carr’s On Raftery’s Hill, given an all too brief run at the Abbey Theatre early last year.

The awards for Best Actor and Best Actress went to the starriest casting of the year and the discovery of the year, respectively. Cillian Murphy was named for his bravura performance as Dad in Grief is a Thing with Feathers, in Enda Walsh’s hulking adaptation of Max Porter’s experimental novella, staged by Complicité and Wayward Productions, in association with Landmark Productions and Galway International Arts Festival. That role required both a brooding force across a vast stage to depict an intransigent crow, a roosting figure of torment, as well as the quieter, affecting struggles of a father attempting to reclaim a normal life with his two boys.

Best Actress winner Sarah Morris performed on no conventional stage at all, by comparison, sharing her heartrending, battered Nannie with audiences, sometimes one person at a time. You met her drinking on the sofa of a flat marked for demolition, for instance, or reading quavering affirmations in the back of an ambulance, or imploring people not to forget she ever existed. In Morris’s extraordinary creation that seemed guaranteed.

Her performance belonged to ANU’s The Lost O’Casey, co-produced by the Abbey Theatre with Ictu, Forsa and Siptu, a complex arrangement which gives you some idea of the scale and adventure behind director Louise Lowe and designer Owen Boss’s project. Together they translated Seán O’Casey’s short work Nannie’s Night Out into an ode to contemporary Dublin, a city still reeling from the problems of a century ago: homelessness, addiction and a society shrugging off responsibility.

The work is as ephemeral, in some sense, as its stunning use of choreography through various settings in the inner city

That it won the award for Best New Play may count as a coup for collaboration: ANU’s version was devised by the company, across successive developments, and the final performance yields no easily consulted text. Even to consider it as a play is a statement: the work is as ephemeral, in some sense, as its stunning use of choreography through various settings in the inner city, for which Sue Mythen was also awarded Best Movement.

Gare St Lazare was recognised for another kind of transformation: the company’s unconventional staging of Beckett’s How It Is (itself a novel that follows few conventions) won Best Lighting for Kris Stone and Best Sound for Mel Mercier. That work upended expectations for audiences who were already mildly disoriented, seated on the stage of the Everyman Theatre in Cork looking out over its auditorium.

Owen Roe may have been the star of the awards show, though, adding Best Supporting Actor  to his  Special Tribute Award

If Porter, Beckett and O’Casey supplied fertile source material for nominated productions this year, it was no different for opera: a reinvigorated Wexford Festival Opera won the award for Best Opera for Il Bravo, composed by Savario Mercadante’s, itself based on a play, adapted from a James Fennimore Cooper novel.

Their male counterpart Owen Roe may have been the star of the awards show, though, adding Best Supporting Actor on the night to his already-announced Special Tribute Award, the former for playing Claudius in the Gate’s stifling production of Hamlet set in a totalitarian state.

Taken with Richard III, you could call it a terrific showing this year for villainy, which seemed to chime with a world too intoxicated and beguiled with tyrants. Maybe we should take some solace from the fact that, at the awards at least, even those scoundrels had to share the wealth.