New writing ‘has to be nurtured and taken care of’, says artistic director Garry Hynes 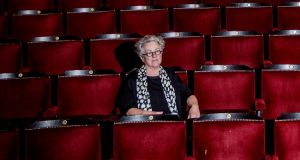 Druid, the theatre company with an international reputation for its innovative stagings of classics, from Shakespeare to Beckett to Tom Murphy, is dedicating 2019 to producing only new plays, aiming to “develop and widen the boundaries around the existing canon and to build the appetite and audiences for new writing”.

In three weeks the Galway-based company goes into rehearsal for the world premiere of Epiphany by Brian Watkins, in association with Galway International Arts Festival, where it will open in July. The Brooklyn-based writer is a “serious new voice”, according to Garry Hynes, Druid’s artistic director.

His script is set as snow falls softly on an uncanny evening. In an old city house a cheery host gathers friends to reignite a forgotten tradition, but the guest of honour, Gabriel, is late. If elements echo something slightly familiar, Hynes stresses that, whatever the inspiration, “it is absolutely not an adaptation”. It is a new play, “set in a city by a river, in no particular country or time”. As well as featuring some of Druid’s ensemble, the show was cast internationally.

Hynes will also direct The Beacon by Nancy Harris – “one of the most interesting voices out there”, says Hynes – coproducing with the Gate Theatre for Dublin Theatre Festival. The play is about a celebrated artist who moves to an island off west Co Cork; a dark shadow from the past emerges when her estranged son and his wife arrive.

During this year’s Galway International Arts Festival, Druid Debuts ups its presentations to three plays, with professional support, a director and a cast to develop the scripts to rehearsed readings. The plays are Caoimhe, Carl and the Great Tapir in the Sky, by Sionnán Ní Nualláin, Shin-Aid by Eamann Breen and Narcissus by William Dunleavy.

Druid’s new work has developed via various routes and “a wide set of resources”, Hynes says. Sonya Kelly’s Furniture, which has just finished a nationwide tour, started as a Druid Debut; Watkins’s Epiphany came via open submission and discussion about a previous play, Wyoming; Harris’s play was directly commissioned by Druid in 2016.

“New writing doesn’t just appear out of nowhere. It’s something that has to be nurtured and taken care of and worked at over a long period of time,” Hynes says.

“From my point of view the writer is the origin, the Adam and Eve. It’s where everything starts,” Hynes says. Although there are other ways to devise productions, “for Druid it’s always been writer and script”.

“We want to do the best new work, obviously, and to have that connection with our audiences. We have huge commitment to the writer, and the writer is at the centre of Druid’s conversation, and has always been, whether it’s Synge or Tom Murphy – whose first anniversary is this week. This is what our year is about: new writers and the literary script,” Hynes says.

“When I look back I realise how incredibly fortunate I am in my theatre life. I am working in Irish theatre at same time as great writers of 21st century – Frank McGuinness, Brian Friel, Tom Murphy. Extraordinary.”

The company has premiered many acclaimed plays, including Conversations on a Homecoming and Bailegangáire, by Murphy; The Beauty Queen of Leenane and The Lonesome West, by Martin McDonagh; The Walworth Farce and The New Electric Ballroom, by Enda Walsh; and My Brilliant Divorce, by Geraldine Aron.

Druid has also introduced writers who have gone on to gain outstanding reputations, including Owen McCafferty, Vincent Woods, Abbie Spallen, Gerald Murphy, Christian O’Reilly, Lucy Caldwell and Meadhbh McHugh. It has also premiered plays from midcareer writers, including Enda Walsh, Marina Carr and Stuart Carolan. Tom Murphy, who was writer in association with Druid in 1983, played a central role in developing the company’s commitment to new writing.

Blood: A disappointing journey into the Irish psychosphere
4