Anything could happen at a Starr show. That was the appeal of his now dated comedy

The comedian Freddie Starr has died aged 76 at his home in Spain. The former lead singer of the Merseybeat group the Midnighters rose to prominence as a comedian in the early 1970s after appearing on Opportunity Knocks. Video: ITV 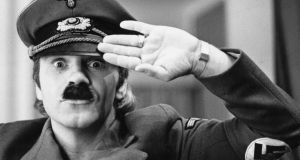 Freddie Starr, who died yesterday, at the age of 76, at his home in Spain, was an eccentric and unpredictable talent best enjoyed in a typically chaotic live environment rather than the sterilised world of television.

His style of comedy may have long since gone out of fashion, but during the 1970s and 1980s he was one of the brightest stars – even if his name is destined to be forever associated with a tabloid headline.

A large part of his popular appeal was that he went to places other comedians feared to tread. He achieved notoriety for his Adolf Hitler impersonation – which was just Starr dressed up in Nazi regalia shouting out random words in German. It was controversial and risque, and it probably wouldn’t be tolerated today, but 1970s audiences responded well to it.

At a gig in the 1990s Starr sparked outrage by hurling live chickens into the audience. One of the audience said afterwards: “To see that happen was so cruel. If it was a cat or dog, people would have been up in arms. But because it was a chicken they got away with it.” Starr shrugged off the criticism, saying: “I’m an idiot. That’s the sort of thing I do.”

He had no discernible comedic style as such. He would move from singing songs in an Elvis Presley style to insulting random members of the audience.

The idea that anything could happen at a Freddie Starr live show was very much his appeal. His was a manic style of humour that hopped from one subject to the next with no apparent connection. It was a high-energy performance that, although lacking in standard comedic fare, had an exuberance and a vitality all of its own. But his work hasn’t aged well.

Starr, who was born on the outskirts of Liverpool in 1943, had a troubled childhood. A speech impediment led to him losing the ability to talk completely, he once explained, and he spent two years in a home. Starr said he covered his insecurities by playing the idiot.

He found an outlet for his maverick talents in the Merseybeat scene, the explosion of musical acts who had risen up in the wake of The Beatles. As lead singer of The Midnighters (who were promoted by Brian Epstein, The Beatles’ manager) he was a serviceable vocalist, but comedy was always his first calling.

He broke through in the early 1970s on the TV talent show Opportunity Knocks. At a time when most comics were deadpan deliverers of scripted material, Starr brought a manic quality to very physical routines. Subverting the genre in a way not unlike Tommy Cooper’s, he made his name with his sheer unpredictability and occasional outrageousness.

For a time in the 1970s Starr was one of the biggest live comedy draws going. Television bosses gave him the opportunity to replicate his live shows on TV, but despite many attempts to sand down his edges and rein in his exuberance, it was never a good fit.

In 1986, while Starr was still a major entertainer, the Sun newspaper ran the front-page headline “Freddie Starr ate my hamster”. In the story a woman claimed that, following one of Starr’s live performances, he had gone back to her house and, after saying he was hungry, put her pet hamster between two slices of bread and ate it.

But as Starr later admitted in his autobiography, the incident was invented by his publicist, the late Max Clifford, to drum up media attention. Despite having one of the most memorable headlines of all time, the story angered and frustrated Starr. As he wrote: “I have never eaten or even nibbled a live hamster, gerbil, guinea pig, mouse, shrew, vole or any other small mammal. I am fed up with people shouting at me in the street ‘Did you eat that hamster, Freddie?’”

With the rise of The Young Ones, French and Saunders and their newer form of comedy, at the turn of the 1980s, Starr fell out of favour. His was a comedy of its time and place, and although he was still a strong live draw, his appeal was narrowing.

He had a major heart attack in 2010 and then, two years later, was arrested as part of the Operation Yewtree investigation, in connection with allegations of historical sex abuse. He was accused of groping a 15-year-old girl while she attended a Jimmy Savile TV show. He spent 18 months on bail before being told he would not be prosecuted.

In 2015 he lost a damages claim against his accuser, leaving him with an estimated €1 million legal bill. He told the Mail on Sunday the case had left him isolated and suicidal and prompted him to move to Spain. “No matter which way I turned there was a f***ing revolver pointing at my head, so I thought, I’m not going to tell anyone, I’m just going to get on a plane and go to Spain, the place I love, and this is where I’m going to die’.”

Starr said many of his friends in show business had abandoned him and that he was too ill to work.

Married four times, and the father of six children, Starr was a comedian whose refusal to tone down his material perhaps meant he never had the exposure he could have had. He fellow comedians Jim Davidson and Bobby Davro paid tribute to him as “one of the greatest ever”.

And the Sun put him back on its front page. Noting that the comedian was “famed for the greatest headline in the world”, the paper’s Friday front-page headline reads “Freddie Starr joins his hamster”. – Additional reporting: PA