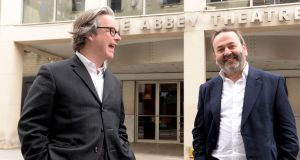 Abbey Theatre directors Graham McLaren and Neil Murray, who attended all meetings, along with their team. Photograph: Cyril Byrne

The Abbey Theatre has committed to reviewing pay rates for theatre workers in a report compiled in response to an open letter from more than 400 theatre professionals.

The report, which was was sent to Minister for Culture Josepha Madigan, also promises more clarity in its communication.

In January theatre professionals had expressed concern about the impact of changes at the National Theatre in an open letter.

The theatre yesterday detailed the outcomes of a series of bilateral meetings with representatives from a cross-section of theatre disciplines. It contains commitments, some with timelines attached, including on pay rates. It committed to more formally developing its relationship with industry representatives and ensuring its “communications meet the information needs of those who work in the theatre sector”.

It has “learned from this dialogue process, and is firmly committed to enhancing the quality of its engagement with all theatre disciplines by establishing clear, accessible and timely communications”.

The report says the Abbey had already addressed two issues raised by the theatre sector prior to the letter: increasing its percentage of in-house productions and a demand that performers, directors and designers whose work is used by the Abbey get its terms and conditions.

In response, representatives of signatories of the letter yesterday said they were “delighted” the Abbey had “accepted the previous inequity in payments to cast and creatives on co-productions” and had pledged workers in all co-productions would be paid at Abbey rates.

“There are however several outstanding issues”, particularly their “requests for the reinstatement of the casting department and literary departments in our national theatre, as well as a commitment to broaden the range of directors creating work for both stages”, the representatives wrote.

The Abbey’s report commits to an email point-of-contact for casting enquiries, and a timetabled plan of action to “reinstate a permanent casting presence”. Signatories expressed disappointment that suggested solutions to the removal of the casting department were a “casting presence”, saying “the request has always been for a reinstatement of the casting department, in line with international practice”.

On pay, the Abbey agreed to discuss actors’ pay rates, consider designers’ pay rates, share its minimum fee rates with freelance designers and its plans for a rate card for writers, and review pay rates for directors, technicians and others.

Among other specific commitments, the theatre agreed to respond to a request for a dedicated design room; to give an update on the structure of the costume department; and to announce a meeting on developing emerging freelance directors’ careers. It also said the recently appointed dramaturg would meet the Writers Guild and that playwrights’ names would appear beneath play titles on its website, where it would also invite co-production proposals.

Both Abbey Theatre directors, Graham McLaren and Neil Murray, attended all meetings, along with their team. The report says discussions were “frank, offering an important opportunity for the directors and staff to listen and reflect, and to provide clarification to the representatives of the signatories”.

The signatories said they were awaiting a date for its full panel to meet the Abbey Theatre board, chaired by an agreed facilitator. A meeting inviting all signatories will be held later this month, they said, to discuss the current outcomes and remaining issues.