Session: ‘Four men in a space playing with music and dance’s relationship’ 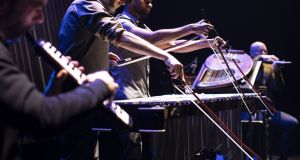 Session is a collaboration that brings together two unlikely partners: Colin Dunne, a former Riverdance star from Birmingham, who has been carving out a career creating thoughtful works dealing with dance tradition, and Sidi Larbi Cherkaoui, a Belgian-Moroccan choreographer and creator of spectacular opera and dance productions throughout Europe.

Projects which bring together artists from diverse backgrounds can often seem like arranged marriages. Individuals forced to find common ground and, eventually, an artistic kumbaya. But Dunne doesn’t believe these types of collaborations should seek common ground.

“I came to performance in the 1990s with Riverdance and, I don’t mean this as a negative, but certainly as an Irish dancer a lot of that work was finding the common ground, like the links between Irish dance and tap or flamenco. I’ve spent quite a while trying to find that cultural commonality, and now, I feel that I should acknowledge and celebrate difference.”

For years, ex-Riverdancers like Dunne, Jean Butler and Breandán De Gallaí have created works within the contemporary dance idiom, and yet a narrative perpetuates of their artistic journey as being like a lucky escape from a stifling tradition. Dunne has been performing for contemporary choreographers like Yoshiko Chuma and Michael Keegan Dolan, while at the same time creating his own dances that seek to define him as an individual respectful of tradition, but not an artistic slave to it.

Session has been a decade in the making. Dunne and Cherkaoui first met in 2009, when Cherkaoui was at the Dublin Dance Festival (DDF), but each had known of the other’s work before then.

“When Larbi was 17, he got hold of a slightly awful Irish dance instructional video that I’d made and had taught himself some steps,”says Dunne.

“I was fascinated by his ability and how his legs could do what he wanted!” says Cherkaoui. There was no follow-up at the time to their meeting in 2009 (“Larbi’s career went a little bit ballistic,” jokes Dunne) but, largely due to the perseverance of DDF artistic director Benjamin Perchet, the two began working together after the premiere of Concert, Dunne’s 2017 homage to the music of Tommy Potts.

So how does their kind of collaboration begin?

“Initially we did the obvious,” says Dunne. “We taught each other some stuff and caught up with each other’s work in terms of showing videos. I tried to bring Larbi up to speed with how I was working.”

Dunne had a specific idea of working with sound, but Cherkaoui was less definite.

“I’m only interested in relationships,” Cherkaoui says. “So at the beginning I was only interested in my artistic relationship with Colin, in the same way I was interested in previous collaborations with [contemporary dancer] Akram Khan or [Flamenco dancer] Maria Pagés. I like to ask the simple question. ‘What is our connection?’ It is almost like psychoanalysis. Who are you to me and who am I to you?”

Both of their movement styles were also different.

“My movements are loose and limber, quite a difference from Colin who is more stable and vertical. My body uses turns and falls and constantly collapses and comes back to life. I’m constantly falling apart and re-emerging.”

Music provided an opportunity for connections.

“Larbi is more of a mover than a sound maker,” says Dunne, although he does play instruments. “Even in those early days we played a lot of music together. Larbi also sings a lot in his work. I don’t. And so we ended up singing a lot in this work.”

Music and sound became increasingly important, but weren’t a theme.

Composer Michael Gallen and musician Soumik Datta also perform onstage as equals rather than background support for the dancers. Including them so completely in the collaboration opened up new vistas to Cherkaoui.

“The subject of sound is so vast and complex,” says Cherkaoui. “If you concentrate on sound in a dance then you are constantly looking to see where it is coming from. You begin to look at movement with very different eyes.”

In particular he was intrigued by the theremin, an electronic instrument that changes pitches through the movement of hands in space. Beloved of B-movie sci-fi composers in the 1950s, the theremin was invented in the 1920s, and it has two antennas that follow hand movements to control volume and pitch.

“It’s both modern and yet very analogue, timeless in a way,” says Cherkaoui. “It can sound like a human voice, or like a high-pitched violin.”

The direct correlation between movement and sound was fascinating to Cherkaoui.

“It is so sensitive, so that the smallest move creates a change. And there is something very beautiful about that sensitivity. You know where you are physically by listening, in other words you hear where your hands should be. You are generating the sound, but the sound is talking to you, directing your hands to a certain place. It challenged me to listen differently and find ways of resonating with the world and responding to it from a sound perspective rather than a visual place.”

The theremin’s electronic pitch-bends correlate neatly with Dunne’s increasingly complex explorations into electronics. Through microphones on his shoes he can manipulate his taps through altering the tone and using delays or reverb. Melody can be created through the rhythm, adding another expressive element to his dance.

“There’s a section of step dance in Session that I had constructed and Michael responded to musically on the piano,” says Dunne. “He was responding to the tonality in the steps. There isn’t a huge range of tonality there, but it is there, and it was interesting for us all to explore it through both music and dance.”

All four performers sing and play music, but Datta’s sarod posed some questions for Dunne at the beginning of the process.

“I had initial reservations because I felt that it was a traditional instrument. It had an exoticism and I thought maybe would be a loaded image and sound onstage,” Dunne says.

Cherkaoui had no such misgivings: “I could understand Colin’s argument, but for me an instrument is just an instrument in the same way that his shoes are just shoes with an interesting sound. In general, my contemporary approach is one of disassociation. I wilfully and literally choose to ignore certain connections in order to see new ones. I’ve done this all my life.”

Lots of hard thinking has gone into Session, but it has a lightness that celebrates music and dance, difference and community.

“Session seems to encompass where we all are,” says Dunne. “We are just four men in a space who are playing and toying with music and dance’s relationship. In Rennes, some audience members said it was like being invited into a session and witnessing an informal exploration of movement and sound.”

Session runs May 10 and 11 at the Abbey Theatre. More information at www.dublindancefestival.ie