Phoenix: art and politics rise up in ‘dance of resistance’ 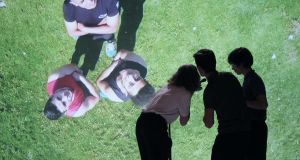 Defenders of drones point out their accuracy, but a real-life example is given in Phoenix. A painter friend of one of the dancers was carrying a tube with a rolled-up canvas, but was mistaken for a soldier and killed by a drone

Drones are both harmless toys and deadly weapons. In Phoenix, French choreographer Éric Mihn Cuong Castaing brings these two extremes into the theatre: onstage playful domestic drones interacting with dancers and, via Skype, live performances from artists living under the constant buzz of military drones in Gaza.

Art and politics are inseparable in Castaing’s projects. His artistic sensibilities formed while growing up in Seine-Saint-Denis, a background that is proudly mentioned in conversation and on his company’s website. A stronghold for the French Communist Party, the Parisian suburb reports the highest crime rate and twice the average poverty rate in France, but also has an ethnic mix that informs an egalitarian and body-specific approach to his dance. Rather than creating a one-size-fits-all troupe of professional dancers, his company, Shonen, is more pluralist in presenting different projects featuring different individuals.

“I try to involve the kind of body that most suits the subject of the dance,” he says. “In one piece, School of Moon, I was working with humanoid robots, and so I decided the dancers needed to be children. Not just because the robots were like toys, but because children represent the future.” Other projects have involved amateur and professional dancers in a variety of styles, from hip-hop to butoh, and this year sees the completion of a three-year residency with Ballet National de Marseille.

He came to dance through the visual arts, studying at the Gobelins school of art in Paris, specialising in computer animation. Increasingly interested in exploring the interaction between the live body and animation, he studied with the Düsseldorf-based artist VA Wölfl, an anarchical presence in the German dance scene whose dancers regularly brandish revolvers as an extension of their arms, in the same way pointe shoes give an extension to ballet dancers legs.

Chamayou is critical of the lack of debate around the legal, ethical and philosophical issues around the use of military drones

“I came to dance because I wanted to mix the real body and technology. I didn’t necessarily want to show one mimicking the other or just present special effects onstage, but find deeper connections. So I used devices like infra-red sensors, so that the live body could control the animation through particular movements. The more the company worked, the more questions emerged about the impact of technology on the body and on society.”

In addition, he was keen to explore how social networks changed the relationship between bodies. Physical distances is reconceptualised as people Facetime or Skype, but how does this change our way of connecting? Reading Grégoire Chamayou’s A Theory of the Drone, Castaing found the perfect device to tease out the relationship between real and technological, and, in particular, the same issue with distance and dislocation. The drone operator’s dislocation from the drone is similar to that of a Skype caller and their recipient.

Chamayou is critical of the lack of debate around the legal, ethical and philosophical issues around the use of military drones. “For whoever uses such a weapon, it becomes a priori impossible to die as one kills. Warfare, from being possibly asymmetrical, becomes absolutely unilateral. What could still claim to be combat is converted into a campaign of what is, quite simply, slaughter,” he writes.

This separation between attacker and victim was earlier posed by French philosopher George Baudrillard, when he claimed that first Gulf War was not a war in the traditional sense because of its asymmetry: it couldn’t be classed as a war because its outcome was predefined. There was only ever going to be one winner. Furthermore, the real violence was portrayed as a video game through rolling 24-hour news coverage of video cameras on smart bombs.

In tackling this subject, Castaing, true to his beliefs, had to find a matching body-type and personality. When in Lebanon he met a Palestinian dancer who spoke of the constant drone activity in Gaza, so slowly and through various contacts Castaing connected with Palestinian artists who would be interested in the collaboration. He eventually began creating the dance with hip-hop group Myuz GB Crew (Meuse Abu Matira, Hamad Abu Hasira, Mohammed Abu Ramadan) and folk dancer Mumen Khalifa. However, Castaing couldn’t set up a live collaboration in Gaza.

I tried to go to Gaza, but it was not possible. So we made the piece on Skype

“It was a very difficult process,” he says. “I tried to go to Gaza, but it was not possible. So we made the piece on Skype. We set up a big screen and every day at two o’clock we would begin rehearsing over Skype.” A real-time Skype call also takes place during each performance, bringing the Palestinian dancers into the theatre.

“This bilocation is important. We have created two realities at the same time, one for western people and one for the Palestinian artists. It’s a strange place, between two worlds. For me, this fragile connection through Skype is a way to create empathy. In real time, we have a window into their home in Gaza.

“Some audience members have admitted that they found it difficult to have a beer and continue with their life after the performance. That empathy can only come from that real-time connection. It wouldn’t work if it was on a prerecorded video.” One of most oppressive aspects of drones is their constant presence, what Chamayou calls the “unblinking stare”. Operators can change shifts, but the drone remains. And allied to the constant surveillance is the constant possibility of a strike.

“During the collaboration we spoke a lot about that menace. The drone is a constant presence in people’s life, so much so that one dancer [in Gaza] said that if he didn’t hear its sound he could not sleep. For some it is like the ‘Eye of God’. It is constantly judging you, but you never know when it would strike you.”

Defenders of the efficacy of drones point out their accuracy in striking targets, but that depends on the operator. Chamayou writes: “The precision of the strike has no bearing on the pertinence of the targeting in the first place. That would be tantamount to saying that the guillotine, because of the precision of its blade – which, it is true, separates the head from the trunk with remarkable precision – makes it thereby better able to distinguish between the guilty and the innocent.” A real-life example is given in the beginning of Phoenix. A friend of one of the dancers, a painter, was carrying a tube with a rolled-up canvas, but he was mistaken for a soldier and killed by a drone.

The Palestinian artists have used small domestic drones to give a visual perspective not possible with a stationary camera.

“In one section Myuz GB Crew are doing parkour in a destroyed building and they film themselves using a drone,” Castaing says. “Here is another way for us to use a drone. And show a kind of dance of resistance.”

Phoenix is at Project Arts Centre on May 11th as part of Dublin Dance Festival. More information from www.dublindancefestival.ie

Donald Clarke: Stop me if you think you’ve heard this one before
8

The appeal of Phil Collins? It's his friendly, happy face
9