Company outlines efforts to improve communication after complaints from producers 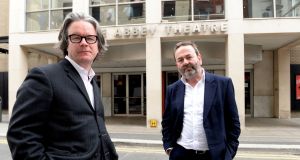 Graham McLaren and Neil Murray of the National Theatre of Scotland who have been appinted as the new directors of the Abbey Theatre. Photograph: Cyril Byrne

The Abbey Theatre has sent a report to the Minister for Culture Josepha Madigan in which it commits to reviewing pay rates for theatre workers and promises more clarity on a range of communication issues.

Reporting on its response to issues raised in an open letter from theatre professionals in January, the theatre has outlined the outcomes of a series of bilateral meetings held with representatives from a cross-section of theatre disciplines. It includes a series of commitments, some with times attached, including on pay rates.

The Abbey has also committed to more formally developing its relationship with industry representatives, and ensuring its “communications meet the information needs of those who work in the theatre sector in Ireland”.

The report says it became clear aspects of communication between the Abbey and the sector need to be improved and “the theatre is committed to addressing this requirement”.

The report sent to the Minister says two issues raised in the theatre sector’s letter had already been discussed by the Abbey and the Arts Council in late 2018 and were near resolution.

The first asked that the National Theatre have a greater percentage of in-house productions, as opposed to co-productions or buy-ins. The Abbey says its commitment to being primarily a producing theatre was reflected in its 2019 programme announced in November. “Self and co-produced works will continue at the theatre, along with limited ‘presentations’, which have always featured as part of the Abbey Theatre’s programming. However, the Abbey Theatre will no longer engage in ‘in-association’ partnerships, outside of some longstanding agreements already in place.”

The second issue already in train was a demand that performers, directors and designers whose work is used by the National Theatre are given its terms and conditions, along with every other employee in the building. The report says it committed in December 2018 to “ensuring all independent artists employed on co-productions as part of the artistic programme would receive the corresponding rates of pay and conditions received by those employed in self-produced shows”.

On other outstanding issues the Abbey’s report outlines some agreed action in different areas, some with times attached.

The Abbey committed to an email point of contact for casting enquiries at the theatre; meeting Irish Equity, the theatre union, to continue pay discussions; and a timetabled plan of action to reinstate a permanent casting presence.

The theatre agreed to reinstate a vouched expenses budget of €500 for costume designers; to share their minimum fee rates; to respond to a request for a dedicated design room at the theatre; to give an update on the structure of the costume department; and said it would consider pay rates for designers’ fees.

The meeting looked at opportunities for freelance directors, and the Abbey committed to announce the date of a half-day meeting with invited directors about how the theatre can help develop the careers of emerging freelance directors. It said it would review pay rates and work to ensure that it communicates very specifically with directors.

The meeting introduced Abbey’s recently-appointed Dramaturg Louise Stephens and offered clarification around the theatre’s commissioning policy. The Abbey committed to ensure the playwright’s name will be clearly displayed beneath the title of the play on its website; sharing its plans on creating a rate card, proposing minimum fees; and that the Dramaturg would speak to members of the Writers Guild.

The Abbey committed to a statement on its website inviting co-production proposals; to ensuring crediting of shows accurately reflects the contract status of each show and to reviewing fee rates for technicians.

The report says the Abbey “hopes this dialogue process has reassured the sector of its position as a producing theatre, primarily providing employment and opportunity for Irish and Irish-based practitioners. In line with the Abbey Theatre’s 2019-2023 Strategy, the theatre intends to continue forging new partnerships with artists and companies, enabling work of the highest standard to be supported by the National Theatre and building on the success of existing partnerships.”