Waiting for Godot review: The best production for 25 years 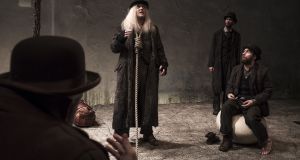 Waiting for Godot: directed with vigour and heart by Garry Hynes

“Off we go again,” says Estragon, with no more enthusiasm than Vladimir, who will later say the same. You know how they feel. A masterpiece written straight out of the starting blocks, roundly rejected and soon hailed as a modern classic, Samuel Beckett’s Waiting for Godot is now nothing like its famous no-show – it turns up quite frequently. You would have hoped that this recent deregulation in the Beckett industry, which flooded the world’s theatres with productions, has allowed for infinite revealing and rewarding variations. You would have been disappointed. Nothing to be done.

All of which makes Druid’s exceptional new production more miraculous. Chosen for staging by its superb cast, directed with vigour and heart by Garry Hynes, and realised with insightful, artful simplicity by designer Francis O’Connor, this is the freshest, funniest and most affecting production of the play in at least a quarter of a century.

On a country road as parched and cracked as a dry seabed, with a tree that resembles a tangle of pen strokes, Aaron Monaghan’s suffering Gogo sits on a rock that time has washed smooth as a pebble. When he stands, bent slightly at the waist, his back arches forward and his brow furrows in doubt. He makes a wonderful double act with Marty Rea’s Didi, tall and bolt upright as a young John Cleese, who tapers from his shoulders to his heels, a picture of resolve. This looks, uncannily, like the marriage between a question mark and an exclamation point. Has Hynes found perfect character notes of conflict and compatibility?!

That wry, spry physicality charges the whole performance, as vaudevillian as it is philosophical, where the uncommon intimacy of the theatre space puts us right in their midst and magnifies every effect. If you haven’t laughed this hard at Beckett in years, or felt as moved, it’s because Rea and Monaghan show every thought process, finding a rooted reason for every line. Just look at the sly long-arc game Rea plays with his hat.

When Estragon asks, for the billionth time, why they are waiting, to be told, for the billionth time, the answer, he replies, “Ah yes”, as though it were a fresh realisation. This is the tragicomedy you recognise gnawing at your life, at your world: the deadening and sustaining routines, the dance between despair and happiness, the cold hard promise of oblivion. You shouldn’t laugh. But you will.

Rory Nolan’s Pozzo is a revelation, not for his bald-headed, sallow-eyed, mercurial plumminess (although that certainly fits), but because someone understands – finally – that this bizarrely indeterminate character is just a hammy act, a series of whirling calculations. “Is everybody looking at me?” he asks, diva-like, as though nothing else mattered. But the most anguished plea of the tramps is precisely similar: does anyone see us? It’s not coincidental that Nolan stills the air with the play’s most profoundly unsettling lines. Like Godot, Garrett Lombard’s Lucky has not quite arrived yet, indistinct on the servant’s famously tricky oratory. If he doesn’t nail it today, surely tomorrow.

There isn’t room to count the fresh perspectives Druid has yielded on this fathomless play. Almost numbed to its depiction of desolation, I was stunned to see how much it says, however mordantly, about happiness. But it’s hard to imagine a more exquisite tenderness in its performance. When night falls, abruptly, ushering in a moon as smooth and reflective as a marble, Hynes snaps the tone, and the actors weaken their voices, staggering together, inseparably to the end. “I can’t go on like this,” says Monaghan, with gentle resignation. “That’s what you think,” says Rea, with sweet encouragement. I never wanted them to stop.

At the Abbey Theatre, Dublin until May 20