The director’s extraordinary take on Shakespeare’s Henry plays, reworked by Mark O’Rowe and starring Aisling O’Sullivan, Derbhle Crotty and Marty Rea, feels like a sweeping epic as a whole, but moment by moment it feels intimate and detailed 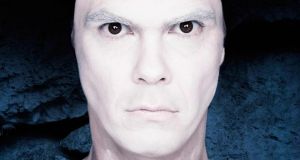 Breathtaking: Marty Rea Richard is like nothing on earth, an ethereal creature who seems to float over the ground in his Japanese robes. This captures exactly the conception of kingship that will doom him in DruidShakespeare

The most obvious thing about Garry Hynes’s extraordinary production of Shakespeare’s Henry plays is that it is not as previously advertised. When the project was announced it was called The Irish Shakespeare. Now it’s called DruidShakespeare. It is a mark of Hynes’s commitment to what emerges in the process of making a piece of work that the initial concept has all but disappeared. An intellectual idea – let’s explore these plays of English nationhood in the context of the wars in Ireland that shaped their creation – has been replaced by a theatrical one: let’s make these plays our own.

Ireland as an idea has fallen away to the extent that the famous first Irish character in a major drama, Macmorris in The Life of King Henry V, has been consigned to the wastebasket, taking his plangent question – “What ish my nation?” – with him. Instead of Ireland as an idea we get Ireland as a presence, as the bodies and voices of a great ensemble of Irish actors. The point is no longer to interrogate Shakespeare. It is to embody and inhabit, indeed to possess, him.

The act of possession is both violent and delicate. Mark O’Rowe’s textual occupation of Shakespeare’s plays for Druid is as rough and as triumphal as Henry’s of Harfleur. The texts are slashed, reordered, reworked. O’Rowe does both battlefield amputations, whipping off whole limbs, and delicate microsurgery, massaging individual lines to make them sing in contemporary Irish voices.

Sometimes the first process goes too far: the loss of the savagely brilliant recruitment scenes from The Second Part of King Henry IV, which lay bare the mechanics of cannon fodder, is at odds with the production’s anti-heroic intent. Sometimes the reshaping is inspired: the resurrection and, then, death of Falstaff at the end of the cycle change the whole feel of the plays. The microsurgery, meanwhile, is delicate and precise: the lines shine with an astonishing clarity.

The absence of reverence for the original texts is not feckless. It is essential to the power of the cycle. Hynes has worked her way back to a stark question. It is not “what does Shakespeare tell us about Ireland?” or “what can we say about Shakespeare?” It’s just “what can we here now articulate through these plays?” This is the word that echoes through the six hours of performance: they become astonishingly articulate. This is literally so in the fluency of the speaking. The lines have been completely absorbed into the actors’ Irish voices. The result is a startling eloquence.

But this articulacy is part of a greater clarity of purpose. That purpose is simply stated: the performance of power. The courts, battlefields, prisons and taverns are arenas in which power is played for: the most convincing performance wins. Each of the main characters in Hynes’s reading of the plays is trying to control the world by putting on the most compelling show. And it is in following through on this idea that she makes such a coherent work from such diverse elements. Richard, Bolingbroke, Prince Hal, Hotspur, Falstaff: each makes a show of himself in radically different ways, but each needs to command the stage. Failure to sustain the performance is death.

The cross-gender casting that gives us Derbhle Crotty’s Bolingbroke/Henry IV and Aisling O’Sullivan’s Hal/Henry V (as well as John Olohan’s curiously affecting Mistress Quickly and Clare Barrett’s superb Bardolph) is completely justified by this central idea. It tilts us at an angle to the literal, creating a world entirely refracted through performance. That world, as it is constructed by Francis O’Connor’s brilliant design team, is an unsettling mix of actuality and abstraction, of rain and mud, with strange shapes, unexpected colours, richly layered sounds and sharply defining light.

And in this distinctive world there is a single command: let us play. Hynes’s achievement is to create a context in which each of the leading actors can invent a performance that is not much like any of the others even while all of them collectively meld into a potent unity. Marty Rea’s breathtaking Richard is like nothing on earth, an ethereal creature who seems to float over the ground in his Japanese robes, and this captures exactly the conception of kingship that will doom him. Crotty’s Henry is all bodily force – and his sin will be written on that same body as his ability to sustain the force of command wanes. O’Sullivan’s vigorous Hal is all voice – a voice pitched hauntingly between female and male, giving us immediate aural access to his need to “become a man” in learning to play the king. Rory Nolan gives us a wonderful Falstaff by playing him not as a clown but as a lord of misrule whose command is disintegrating.

The speed and deftness with which we move through the successive domination of the stage by these great performances give the cycle a rare combination of fabulous variety and absolute coherence. It is full of theatrical individuality yet is utterly an ensemble piece. As a whole it feels like a sweeping epic, but moment by moment it feels intimate and detailed. In the end it is not even a banishing of historic anxieties about Shakespeare and Ireland. It has left those anxieties far behind and gone into the realms of pure, exhilarating theatre.