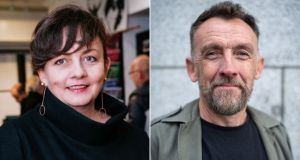 The Abbey Theatre has announced Caitríona McLaughlin as its new artistic director and Mark O’Brien as its new executive director. Both will join the Abbey staff in early May.

The board of the national theatre decided in July 2020 to hold an open competition to fill two separate artistic and executive roles to lead the Abbey over the next five years, including the development of a new building. The decision marked a change from the joint directorship of Graham McLaren and Neil Murray, who have led the Abbey since July 2016.

McLaughlin, who has been an associate director of the Abbey since 2017, has directed in London, Dublin and New York, including the Abbey productions of Patrick Kavanagh’s The Great Hunger at the Irish Museum of Modern Art last autumn; Citysong, by Dylan Coburn Gray (which was nominated for best new play at the Irish Times Irish Theatre Awards last year); and On Raftery’s Hill, by Marina Carr, for which McLaughlin won best director at the 2019 awards.

“We are in a time of profound and existential change but also one of potential and renewal,” she says, thrilled to take the role at “this pivotal moment”. She adds, “We need to find and champion new voices and new ways of seeing. This means identifying combinations of characters we are yet to meet on our stages, having conversations we are yet to hear whilst also engaging in an interrogation of our classical canon with an urgency and curiosity about what makes it speak to this moment. Our stories teach us what it is to belong, and what it is to be excluded and exclude.” She says her time as artistic director begins with two questions: “Who were we, and who are we now?”

Mark O’Brien, currently director of Axis arts centre, in Ballymun in Dublin, where he has used theatre for cultural and community engagement, has more than 25 years’ experience in theatre and the wider culture sector. As executive director of the Abbey he will be responsible for engaging with local, national and international communities, the day-to-day running of the theatre, and its redevelopment to create a new Abbey building.

O’Brien says that when Ireland emerges from the coronavirus pandemic it will offer an “exciting opportunity to take stock, listen and recalibrate, allowing us to develop processes, structures and spaces where people are supported to flourish and to create great work”. Regarding the new Abbey building, he hopes to develop “a new theatre complex as a major civic and national resource, and, by exploring, collaborating and leading on new models of artistic and civic engagement, to forge a new model for our national theatre”, to both reflect and shape society.

The appointments come after changes in the Abbey’s production model and the way it fulfils its role as Ireland’s national theatre have caused controversy over the past two years.

The Abbey’s chairwoman, Dr Frances Ruane, says its board is delighted “to have found two codirectors who are so passionate about, and committed to, the mission of our national theatre, and to creating great art that connects with the people of this island, our diaspora and the global artistic community”.

She thanked Graham McLaren and Neil Murray on behalf of the board for their contribution to the Abbey over the past five years, saying they “have brought exceptional new talent to our stages, have overseen great improvements in gender parity and diversity in both artists and audiences, and their innovative Free First Previews have helped to broaden access. In the past year they have also shown innovation and leadership in how theatre can adapt digitally to lockdown conditions, with their Dear Ireland series bringing the Abbey’s work to worldwide audiences.”