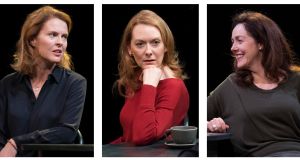 It is the morning after the opening weekend of her latest theatrical venture and Anne Clarke is feeling tired but buoyant. The first performances in the Theatre for One booth, which had been waiting patiently in the foyer of the Abbey Theatre for performers to inhabit its intimate stage since September, finally welcomed audiences, many of whom – Clarke included – were experiencing live theatre again for the first time in nine months.

Despite her own involvement behind the scenes, Clarke “was not prepared for the overwhelming emotion that hits when you are so close to an actor performing a play for the first time in nine months. It was really quite overpowering.”

The staging of Theatre for One at the Abbey was originally conceived as part of the cancelled Dublin Theatre Festival in October. Its December premiere was being staged as part of a pilot for a return to live performance under Covid restrictions, which have been particularly harsh for those in the performing arts.

Clarke was among many in the industry who was vocal about the blanket closure of an “an impeccably well-run industry” that “is a more controlled and safe environment than vast swathes of other activity that was permitted when Level 5 was lifted. I acknowledge the importance that we all do our best to keep ourselves and others safe – and it was wonderful that as well as every shop, hairdresser and gym, that galleries, museums and cinemas were reopened. But the fact that the theatres – where health and safety is in the DNA of every production even before Covid times, where a show has already been risk assessed within an inch of its life before it opens – remained closed just did not make sense to any of us”.

Clarke, who served on the Arts Council’s advisory group for the Covid-19 crisis, was delighted to offer Theatre for One as an experimental example of how safe and efficient live theatre could be, not just for the artists she had commissioned to create the work but for the whole industry.

While lobbying and campaigning for her own and her colleagues’ future, Clarke was busy making new plans too. When theatres were faced with closure in March, she says, “There were a few weeks when I, along with everyone else in the theatre world, was ‘unproducing’ our plans, to borrow a term from [Scottish playwright] David Greig.”

“[The year] 2020 was going to be the most amazing year ever for us,” she says. “We had huge productions planned [including the premiere of a musical version of Breakfast on Pluto] and international tours set up, and one by one they came tumbling down. But I am a relentless optimist – you have to be to be a producer – and I felt a real responsibility to do whatever I could to keep working, to keep those I was supposed to work with working. If it couldn’t be as we had planned, we would concentrate on smaller scale work, one- and two-handers that could be performed under restrictions.”

Prompted by the Arts Council’s capacity-building fund, Clarke also started to consider the potential for the digital dissemination of work, an area she was immediately wary of for a number of reasons. “In a nutshell, you have two ways in which you can reach people digitally. You can do it as a live stream, which can be technically very tricky, or you can do a performance capture with multiple cameras and release it afterwards, which gives you better quality, but is just not live. And theatre is live. Theatre should be live. That is the thing we are missing: knowing that it is happening in real time, that you are sharing something even if not in the room.”

Inspired by London’s Old Vic, Clarke began to make plans for the first performance in Landmark Live, a “hybrid” digital production of Mark O’Rowe’s 2018 acclaimed play The Approach, starring Cathy Belton, Derbhle Crotty and Aisling O’Sullivan, which Landmark was due to tour internationally this winter.

In some ways, Clarke says, “It is the perfect Covid vehicle: there are only two actors on stage at any one time, and they are seated, so it is easy to maintain distance.” The original conception for the production was that it would be performed at the Project Arts Centre for a live, socially-distanced audience, while being live streamed at the same time. Unfortunately, the return of Level 5 restrictions means a live audience will be unable to attend. However, the live stream will still go ahead as planned.

The introspective nature of O’Rowe’s play, Clarke says, lends itself particularly well to the camera. The Approach, which charts the complex relationship between three women over a period of time, “is about the characters’ internal struggle: what’s going on beneath the surface”, so the intimate nature of the camera-close up, she hopes, will work well.

The fact that O’Rowe, who also directs, has form as a film director too, will be of benefit to the digital capture, “but it is really important to say that is not the impetus at all. We did not choose [to stage The Approach again] thinking ‘This will work well on screen’. The live experience – where the actors get to do what they need to do, for that audience of 30 or so in the Project Arts Centre – is where we are starting from”.

Landmark Live’s second production – Samuel Beckett’s Happy Days, starring Siobhán McSweeney and Marty Rea – also planned to offer audiences a live-performance/live-stream option. It will now be staged and streamed for one night only at the Olympia at the end of the month. Similarly, Clarke insists that it will “be very much directed [by Caitriona McLaughlin] as a play. The streaming is only a small part of it – a means to an end. Obviously, we want to make sure it works in filmic terms, but really if it is the only way to get actors, directors, designers back into the theatre, we will take it. If it reaches a wider audience as a result, that’s great but it is not our primary motivation”.

Part of the wider audience for The Approach, meanwhile, will be found in New York, where the Landmark Live production will be available for US viewers to stream through St Ann’s Warehouse, in an exclusive North American premiere. The theatre, which has hosted many Landmark productions over the years, had hoped to bring The Approach to New York after the production played at the Edinburgh Theatre Festival in 2018, “but there were availability issues, and it didn’t work out. So I suppose you could say this is one of the good things about everything that has happened since March.”

As our conversation ends, she prepares to head into the Abbey, to continue overseeing the Theatre for One initiative, the end of the run sadly signalling the return of live performance to the dark. With dogged determinism, Clarke reminds herself that the show will go on. “I mean, we are fortunate to begin the new year working at all. It is a great, refreshing start after a very challenging year.”