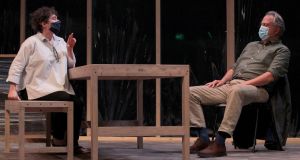 Stanley Townsend on stage with director Lynne Parker before the premiere of Solar Bones by Mike McCormack in an adaptation by Michael West. Photograph: Mark Stedman 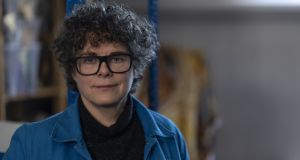 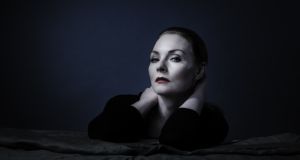 It’s a bit like a tonic in trying times, talking to Rough Magic artistic director Lynne Parker. On the back of a good year for the theatre company, all things pandemic considered, she’s upbeat about 2021, including “the prospect of a physical as well as a virtual manifestation” of drama.

While it had to cancel shows last year, Rough Magic managed to present actual live theatre since lockdown, rehearsing and premiering a full production for an extremely distanced audience: Solar Bones at the Watergate Theatre for Kilkenny Arts Festival in August.

They’re currently editing a “filmic version” of Marina Carr’s unsettling, brutally intimate Hecuba, set in the aftermath of the Trojan War, seen at Dublin Theatre Festival 2019. They rerehearsed and performed it without an audience, allowing many takes of each scene, director of photography Colm Hogan filming from multiple angles, mirroring the play’s different versions of the same story.

The film is “an adventure for us,” says Parker. Plus, “one of the learnings of this time has been: everything will be filmed”, to allow for integrating live stage and streams.

Nonetheless, Rough Magic’s “huge commitment is to get back to live performance, for an audience, in a space. Everybody in theatre feels that. The performance is unique every single time. But it’s about using all the means at our disposal. It can all work together.”

One of this year’s live shows will be a co-production with with Axis Ballymun of a new thriller, Glue by Robbie O’Connor, in “let us say, the autumn”. Uncertainty is the only certainty: like so much at this point, there’s much that “nobody knows”, and live performance will take on board whatever conditions apply at the time. Thinking at the moment in theatre is that somewhere from late summer on venues might start opening again, says Parker.

Indoors aside, there’s definite potential in two outdoor shows in mind. One is outdoor Shakespeare, for what has become something of a tradition at Kilkenny Arts Festival; the other is Fionn Foley’s satirical Tonic, in the format of a carnival touring medicine show, which Rough Magic is supporting with Solstice Arts Centre in Navan. Plus, its planned Christmas 2020 co-production with Smock Alley Theatre of Nick Drake’s All the Angels – about the first performance of Messiah in 1742 Dublin – which had to be ditched because of Covid, may find its way back this Christmas instead.

So many irons in the fire, all subject to the shifting sands of what the pandemic allows: Parker sounds energised by possibilities. Meantime, what she’s most buzzed by right now is Rough Magic’s extensive new artist development programme, Compass, a massive blooming and expansion of its 19-year strong Seeds programme, merging artist development and core programming – especially for the independent company’s 40th anniversary in 2024 – in a new structure, with multiple opportunities for artists, plays, theatre professionals.

Parker describes it as “all encompassing, literally, and it will feed through everything the company does in the next few years” with all of the development work towards shows Rough Magic is involved in, allowing it develop both ideas and people.

The multi-pronged Compass includes play commissions for established writers, Marina Carr, Hilary Fannin, Morna Regan, and also significant new voices such as Sean Dunne, Erica Murray and Shane Mac an Bhaird. As well as that, “We’re looking to give people a bit of money, €1,000, to think, essentially”.

For the Rough Ideas open call for writers and theatre artists, they’ll “pay people, hopefully from a diversity of backgrounds, to think the potential of an idea through, investigate and interrogate it. It’s something people are rarely paid to do. We want ideas from all over the place, from every sector, age range, ethnicity, the whole shebang, so we are surprised and delighted by a huge diversity of ideas, to see what we can realistically help with and take forward.”

Through Compass they’re recruiting a literary manager and a trainee producer, and Seeds apprenticeships for directing and design are expanded and linked to specific shows, with year-long employment to learn on the job. With the apprenticeships, “we want to emphasise that artists do need to be paid”, says Parker.

Seeds has been a great success story. “The number of Seeds who’ve gone on to employment or full productions for the company is really remarkable”, says Parker. Alumni range from designer Sarah Jane Shiels and director Ronan Phelan to Cian O’Brien (now director of Project Arts) and Sophie Motley (new artistic director at Everyman Cork), to producers Lara Hickey and Matt Smyth.

“The connections keep going.” Parker observes too that “development, and supports for development, is necessary on a professional and personal level all through your life. It’s not confined to young theatre makers. Compass extends a 360 degrees spectrum around theatre practice, but also though experience, so it includes both emerging and established artists.”

All that and development workshops, research trips, staged readings, residencies. Rough Magic is pulling Compass together through both its Arts Council funding, and also a good news story – a new Lackendarragh Bursary to the company, a donation from financier Seán Páircéir. Parker stresses Páircéir is a benefactor; this isn’t corporate sponsorship, but a commitment of significant personal funding over three years to feed theatre development.

A former chairman of Dublin Fringe, Páircéir has “kept pace with what happens in the arts world”, observes Parker. Both sides see it as an example of patronage working beneficially in both directions. “Small encouragements can sometimes be a catalyst to great outcomes,” says Páircéir, who’s “delighted to be able to contribute to the execution of Rough Magic’s exciting vision and hopeful over time that this could be a model that others might consider”.

“Enlightened patronage,” says Parker, “can make a real difference. We’re told to fundraise, and you can spend a lot of time on that for very little return. We’re publicly funded through the Arts Council which carries a lot of responsibility, and that’s a good thing. But it’s good as well to get the freedom afforded by someone who’s just saying: I trust you to deliver a vision, I’m literally buying into your vision, and I trust you to deliver it. See you when you have it back.”