Abbey Theatre does not plan to renew joint directors’ contracts

Neil Murray and Graham McLaren due to leave in 2021, when their role will be split 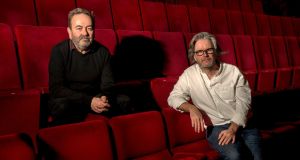 The Abbey Theatre does not intend to renew the contracts of its joint directors, Neil Murray and Graham McLaren, when their five-year term ends, in July 2021. The board of the national theatre has confirmed that it plans to hold an open competition to find their replacements for 2021-26, dividing the institution’s artistic and executive leadership back into separate roles.

Changes in the Abbey’s production model, and the way it fulfils its role as Ireland’s national theatre, have caused controversy over the past 18 months.

“In view of the challenges and opportunities in the coming years, and following consideration of its strategy and its leadership requirements for that period”, the board says in a statement, it has decided that dividing the leadership roles “is in the best interests of the national theatre”. The Abbey declines to give more details or say when the jobs will be advertised.

Before taking over at the Abbey, in 2016, Murray and McLaren worked at the National Theatre of Scotland, where Murray was executive producer and McLaren was an associate director. They worked at the Abbey for six months alongside their predecessor Fiach Mac Conghail, who had been artistic director of the Theatre since 2005.

Just before the coronavirus pandemic closed all Irish theatres, in March, four appointments were made to the now 11-strong Abbey board, chaired by Frances Ruane: the human-resources specialist Michael Owens; the playwright Michael West; Máire O’Higgins, who works in arts, education and community development; and the financial manager Breda O’Keeffe.

Immediately after shutdown the Abbey started to work on a virtual-theatre project, Dear Ireland, to address the pandemic in new writing and performance. A new phase of Dear Ireland goes online on August 10th, as part of the theatre’s revised 2020 lineup of live and digital theatre. It includes a blindfolded production of Bram Stoker’s Dracula, an immersive site-specific telling of Patrick Kavanagh’s epic poem The Great Hunger, at Imma, a Zoom adaptation of the previous production of This Beautiful Village, and a nationwide partnership with the GAA.

The Abbey’s recent controversy erupted in January last year, with a letter to the minister for culture signed by 311 actors, directors, designers, technicians and producers – the figure later grew to 425 – who objected to a large increase in coproductions and a reduction in self-produced plays under Murray and McLaren. They wrote that this had led to fewer job opportunities and lower pay, with knock-on effects across the theatre sector.

The national theatre quickly committed to produce more plays itself and pay in-house rates on coproductions, and reinstated the role of casting director. The theatre also announced 17 measures it would take in response to the letter, but disagreements continued, and in December 2019 its signatories again wrote to the minister, to say the Abbey’s actions didn’t live up to commitments its had made during a series of discussions.