When mainstream theatre closed, the avant-garde got busy

With productions shuttered, theatre has to break new ground to reach audiences 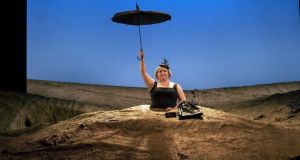 There you are, a very unpopular person who hates the art most people love. A young radical wanting to change the world, you sink into a dark mood whenever someone enjoys the latest popular comedy. The plays you loathe make lots of money, driving you insane. So, you decide to convert those around you to a new way of experiencing theatre, one that is different and possibly challenging. Everyone’s going to love it, right?

In Anton Chekhov’s 1896 comedy The Seagull, not everyone likes the experimental play staged by the frustrated playwright Konstantin. Regularly mocked by his famous actress mother, who has taken one of the country’s most celebrated authors as her lover, Konstantin’s search for approval is very complicated. His artistic vision is more straightforward and surprisingly free of pretentiousness. “We need new forms,” he says to a member of his audience, explaining how most playwrights are beating a dead horse.

Last year, a streamed adaptation of The Seagull by Celine Song (still available to watch on New York Theatre Workshop’s website) was set in a suburban version of the recent past. An awkward Konstantin, with the carefully kept beginnings of a beard and a T-shirt with a skull on it, looked fresh from a college lecture on Nietzsche. Most revolutionary was the casting of the character, played not by an actor but by a computer avatar. Song’s production, The Seagull on The Sims 4, was staged within a videogame and streamed live on the platform Twitch. The spirit of experimentation is alive and well.

This weirdness isn’t going anywhere soon. In a spring where most theatre looks streamed, experimentation is involved in every aspect of the medium right now

Adopting the format of video game live-streaming, we watch Song as she selects the characters’ personalities and chooses their costumes. She drops them into a splendid mansion and entertainingly wrangles them towards the play’s elaborate set-pieces, all the while battling with the artificial intelligence’s free will – everyone’s got to sleep, eat and use the bathroom. Funnily, that chaos of characters walking out on each other during crucial moments befits Chekhov’s comedy, which itself is a parade of missed connections.

Does it count as a play? Not one that we’re used to. Song has skilfully outlined the anatomy of Chekhov’s script and hits each important mark. Some of the most disarming moments involve seeing people messily flirt and crushingly reject each other as scripted, but without Song’s guiding hand, as if the algorithm somehow got its hands on the character notes. Major plot points receive inspired solutions, as some characters have to tragically die, others have to give birth, all within the world of a videogame.

This weirdness isn’t going anywhere soon. In a spring where most theatre looks streamed, experimentation is involved in every aspect of the medium right now. Producers take new things into account in their choice of play, theatre directors evolve their approaches as they stage for camera, and those of us here for it are exploring our definitions of theatre. All of this has the unexpected side-effect of making us edgy by default. There was a time when to be seen at the vanguard, you had to show up at the Exposition des Impressionnistes and nod approvingly at the new Manets. Or go to a John Cage concert and sit through a composition resembling four minutes of silence. Nowadays, you sit in your pyjamas and watch a play on your laptop and you’re actually being avant-garde.

This is a very different landscape than the one last March when playhouses closed. Live theatre was the river through which our understanding of the medium began and ended, and it instantly froze over. It was difficult not to view online plays against what had been lost: the liveness and physical presence that defined theatre. Everything else easily felt like an artificial substitute.

That was a while ago, and over the past months we’ve watched a lot of strange new plays, some live and some not. For instance, the pre-recorded Ratatouille: The TikTok Musical was a vibrant new musical based on Pixar’s 2007 animated film, but the story behind the production is also noteworthy. In August, schoolteacher Emily Jacobsen posted on TikTok a song tribute to Remy, the rat at the centre of the film with a dream of becoming a Paris chef. The video went viral, with other TikTok users adding musical arrangement to the song. Singers used the app’s “duet” function to lay vocal tracks, and choreographers performed playful, light-footed movement against the music.

By December, producers Jeremy O Harris and Greg Nobile had acquired permission from Disney to develop the TikTok content into a streamed musical to fundraise for the support organisation the Actors Fund. In an era when developing a Broadway musical takes a billion years, this speed was like something from an alternative reality – which is basically what theatre fans live in now.

The musical follows Tituss Burgess’s audacious Remy as he discovers the legendary restaurant he’s long dreamed of visiting. “This gastronome/Is finally home,” he sings in Remember My Name, the standout anthem that builds on Jacobsen’s original song. Through scenes woven from waist-up frames of individual performers, backed by the rodent greys and kitchen whites of the background design, Remy allies himself with a garbage boy to secretly serve up great dishes in the fading eatery. Everything zips along at such a brisk pace, not everyone gets an interesting moment. It doesn’t have the same breadth of a large-scale musical. Instead, much like The Seagull on The Sims 4, the enjoyment mostly lies in seeing how it tries to “put on a show” in a time when that’s not possible. For instance, when lone dancers are seen cloned – a device from TikTok – to become wider ensembles, it’s a thrilling reminder that the visual vocabulary of the stage is still with us.

People miss sitting together in a theatre, and streamed plays seem well placed to transform that loss into pathos. In Dead Centre and Mark O’Connell’s To Be a Machine (Version 1.0), live-streamed from an empty auditorium, there was a stunning moment when a reverse shot revealed an audience of iPads sitting in the stalls displaying our faces. There we were, assembled together. The play goes on the trail of real-life entrepreneurs enhancing their bodies through technology, and the image of our floating heads became visual metaphors, evoking a bio-hacker’s vision of uploading human consciousness into cloud storage, or the strange slumber of cryogenically frozen bodies in a facility somewhere. I closed my laptop afterwards fully aware I had watched a play alone at home but I had also been with an audience in a theatre, albeit through an avatar. But it was still affecting.

What’s significant is that the mainstream has been forced to close shop, leaving the avant-garde with the responsibility of keeping the medium going

As we sit through another period without live theatre, the boundaries drawn last March look very different. Months of experimentation have made it more difficult to classify streamed plays as inauthentic and live plays as authentic. In fact, it’s possible that an older divide seems to have reared its head, with live theatre feeling like the mainstream and streamed theatre like the avant-garde. It’s an ancient squabble that’s made us all get snobby about what is good art and what isn’t. And – let’s face it – whether it’s sitting through a traditionally made drama or a non-conformist experimental play, there’s a good chance we’ve been bored during each at one time or another.

What’s significant about this moment is that the mainstream has been forced to close shop, leaving the avant-garde with the responsibility of keeping the medium going. That has caused some to expand their horizons. Last month Pat Moylan, a long-time producer accustomed to filling big houses, announced plans for a streamed adaptation of Claudia Carroll’s novel The Secrets of Primrose Square. Last week, a new streaming platform by Landmark Productions hosted Samuel Beckett’s absurdist play Happy Days starring Siobhán McSweeney, staged by On Rafferty’s Hill director Caitríona McLaughlin.

Such experimentation carries a sense of urgency, as the medium searches for new ways to connect with audiences. Towards the end of The Seagull on The Sims 4, when Konstantin sadly died, a weary Celine Song asked her viewers for suggestions on what to write for his epitaph. In the comment sidebar, someone offered the most fitting phrase imaginable. “We need new forms,” typed Song, newly uplifted. Sometimes new ground gets broken.