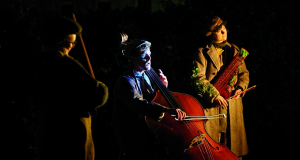 In 1983 writer Tom McIntyre and director Patrick Mason collaborated on an adaptation of Patrick Kavanagh’s epic poem The Great Hunger at The Peacock Theatre. The resulting production was a landmark moment in Irish theatre, fusing word and image, movement and text in a startling new way. In this new theatrical version of the poem for the Abbey Theatre, directors Caitríona McLaughlin and Conall Morrison take ownership of Kavanagh’s poem in what is more a staging than an adaptation of the text.

The poem, which is structured in 14 discrete parts, is shared among 16 actors, who we encounter as we move through the grounds of the old Royal Hospital. The journey is one that changes as the evening turns into night, but McLaughlin and Morrison, sensitive to the scope of sky and the breadth of landscape offered from certain vantage points, allow nature itself to be the driving force of motion as Kavanagh moves us through the seaon’s of Maguire’s life.

Thus we begin by stepping through an LED-rimmed proscenium that is both frame for the landscape and a visual signifier of the theatre. A young woman sings a raucous guttural song as Maguire in his first incarnation (Liam Carney) moves through the field in the distance harvesting potatoes: the dull thud of spud against the bottom of an enamel bucket audible above the singer’s voice. In the closing scene, as our final Maguire (Mark Lambert) invokes, the curtain falling on the farmer, we see the ghost of that earlier Maguire still moving through the fields in darkness for another audience, a lamp swinging in his hands: this is the cycle of human fraility, of human life.

In between there are a dozen scenes of rare beauty: Felispeaks incanting stanza 3 in the embrace of an enormous oak; Peter Coonan standing ankle deep in the puddle of a fountain dreaming of “lewd sleepiness”; Emmet Byrne tumbling across a wooden gate “glorying in the lie of his own happiness.”  They are each that lonely farmer, twisted by his own fertility, as well as observors of his pedestrian Irish tragedy.

Paul Keogan lights the way safely through the growing darkness, the performers coming to life under his sensitive illumination, which is enhanced by the natural conspiracy of moonlight. Conor Linehan’s compositions bring the sophisticated surety of classical strings to the rougher, raw melodies of traditional airs that are carried on accordions and marching drums by the msuical ensemble, while Saileóg O’Halloran’s tweeds and wools are softened by the dried flowers that sprout from them. Everything about the studied architecture of this ambitious production reveals, as Kavanagh did, that there is beauty even in the dying grasses.