Once Upon a Bridge: Unchecked aggression and its regretful aftermath 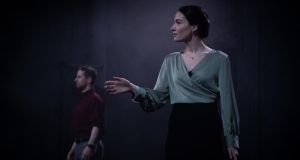 Once upon a Bridge: Aaron Monaghan and Siobhán Cullen in the Druid production of Sonya Kelly’s play. Photograph: Emilija Jefremova

ONCE UPON A BRIDGE

Streaming from Mick Lally Theatre, Galway
★★★★☆
Early in Druid’s absorbing streamed play Once Upon a Bridge, an ambitious upstart in the London corporate world makes his way across a crowded room to speak to a woman. High on romance, he insists that he is the best man in the building, the most excellent and honourable. With a sharp wit, she flirts back. “A gentleman never calls himself a gentleman,” she says.

That this man – wealthy, corrupt, brashly self-confident – doesn’t instantly come across as a loathsome empty suit is due to the subtle detail of Aaron Monaghan’s excellent performance, which is not as much a picture of overbearing privilege as it is one of affectionate devotion. A year later he’s married, focused on a job promotion and wanting to provide a splendid house for his family. He seems to be trying to do right.

Inspired by a real near-death incident where a man pushed a woman into the path of an oncoming bus, Sonya Kelly’s fascinating new drama is an insightful exploration of unchecked aggression and its regretful aftermath. The cavernous stage of the Mick Lally Theatre even evokes a mysterious purgatory under Sinéad McKenna’s otherworldly blue lighting, where characters speak in interweaving narration, gradually piecing together a dangerous unsettling event.

Transgressions can reveal, in the case of Aaron Monaghan’s man and his obsession with a job promotion, misogynistic prejudices against a colleague

In Kelly’s drama, commonplace hostilities can alter lives forever. When an Irish lawyer determined to succeed in a prestigious London law firm (Siobhán Cullen) thinks back on her grandmother’s time as an immigrant in the same city, and how an on-street attack left her disfigured, there is an awareness of assault not only as physical harm but also as injury to someone’s dignity, sadly stripping them of their confidence.

Such trauma forms part of a wider concern about the loss of courtesy and the violence of not giving precedence to fellow citizens: transgressions that can reveal, in the case of Monaghan’s man and his obsession with a job promotion, misogynistic prejudices against a colleague, or force a visitor to alter aspects of themselves like Cullen’s woman, who finds life easier when concealing her Irish identity.

When one shockingly collides with the other on a bridge, it could beg the grim question of whether chivalry is actually dead. While aggression gets channelled into the daily racism dealt with by Adetomiwa Edun’s tenacious bus driver, it feels significant that the play’s uplifting displays of decency belong to him, as someone not receiving such politeness in return.

If the pace falters towards its conclusion, it may be because Kelly, whose magnificent comedies How to Keep an Alien and Furniture disguised exposition with fabulous bons mots, has met the serious tone of a drama by making characters overly lyrical in parts, an approach that feels more strategic than natural. Other embellishments work better, such as director Sara Joyce’s use of prerecorded video to further hit home the play’s touching finale, a reminder that kindness still isn’t a bridge too far.