Driven offstage by the pandemic, I have said farewell to the followers and started a new life 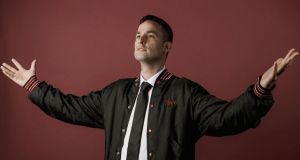 Stephen Mullan: ‘Slowly the fire began to die inside. The writing stopped as reality sank in’

“Hi, I’m Kevin,” he said. The playground swings are the only place for fathers to get some male bonding legally these days.

He was a nice man, happy to work for an engineering firm that means his job is not under threat. “What do you do yourself?” he politely asked, and it was the first time I said it: “I used to be a stand-up comedian.”

His face dropped, and what followed was the awkward moment when one man watches another man trying to keep on top of his emotions like a bulging suitcase about to burst.

“I am so sorry,” he said. Cue that same feeling, you know, the big kick in the gut, the same one that you feel when a girl breaks your heart at 15 because she wants to see other people.

I could only smile and keep the swing going. It has never felt right to express any pain about the work that I’d built for nearly five years.

One promoter pushed me into doing a gig on Zoom. When the opening act was on, a hacker blasted pornography onto the live stream. I logged off and never went back

I worked hard at it, I really did. I was a comedian that few had heard of, but maybe I made you laugh opening the show for one of Ireland’s bigger acts. It was a life on the road with earphones, pens and notebooks; buses, trains, car rentals if there was money.

Some nights were amazing: waves of laughter drenching your whole being in Vicar St or the Wexford Opera House. Some were in a village hall for people of a different generation who had only ever seen stand-up on the telly – no less amazing. Some paid well, some had tea and sandwiches.

When lockdown began, I kept writing anyway, my next show. The first show went well: a Dublin Fringe Festival run and a little tour around the island. I was determined to keep the momentum going, write another show, do the Edinburgh Fringe, and build on the small and loyal fanbase.

“Keep podcasting. Do more online,” they said. I’d be ready to go when it all comes back. But slowly that fire began to die inside, weeks turned into months, and the writing stopped as reality sank in. How do I know any of this is funny unless I try it out with the audience?

One promoter pushed me into doing a gig on Zoom which I initially refused to do. “You’ll be great,” he said. When the opening act was on, a hacker blasted pornography onto the live stream, I logged off and never went back.

With my podcast I took on the responsibility of making the most uplifting show that I could, to keep people smiling. Messages came in from Boston, Canada, Australia: “Thank you so much for keeping us smiling.”

But the funny thing about keeping people smiling is that you can forget to do it yourself. Something was missing. The magic of being in a room with humans to find a common joy doesn’t exist online.

There are two simple requirements that for me define being a stand-up comedian, an audience and a room. The art was finding the magic with those two simple ingredients. There is no art in figuring algorithms, memes, and Instagram stories in the desperate battle for attention from bots.

Summer came, and my colleagues were all moving on. Some became postmen and women, some went back to the building sites, while others dusted off engineering degrees, rejoining the “real” workforce, like secret superheroes with comedic powers ready to fire at any moment.

My CV was full of jobs at high-end restaurants where I had received big tips for humour and developed skills that included polishing cutlery, symmetrical latte art and chasing dreams.

So I got rid of the apps, said a fond farewell to the listeners and signed a form online that marked the beginning of a new life, 17 years after I dropped out of school as a 17-year-old.

The Trinity Access Programme takes people from backgrounds that have low progression rates into third-level education, or people who were at an educational disadvantage for social, economical or cultural reasons. My own reasons are in there somewhere.

In my new life I still live in my bedroom, but instead of editing the sound of my own voice, I spend it on Zoom, with my fellow scholars of all ages and walks of life.

Nicky is a retired plumber with a firm grasp of Marxism. Glenn is a chef who travelled the world for the past decade with stories from shamans to being stranded in Fiji. Marluce is from Brazil and finds Irish history complicated (so do we, Marluce).

We learn how to use indents in Microsoft Word, the philosophy of the perfect state according to Socrates, the psychology of Stanley Milgram’s obedience experiment, and standard deviation in statistics class. The goal for us all is to be able to go to Trinity College next year and undertake a degree in the arts and humanities.

While one life may have ended, I’m feeling the sense of privilege again, to live in a country that means I can get a second chance at something.

As for the jokes? I don’t know. The pandemic feels like the end of a lot of ways of life for many, and, more importantly, the loss of life itself. To complain now about not being able to tell jokes when some nurses will have been living in PPE gear for almost a year feels wrong.

When my wonderful agent’s name comes up in the title of an email or a text, my heart now sinks, like when you get a text from someone you used to love a long time ago. “What, you mean you’re back in school? You’re coming back?”

I don’t know if I will – maybe we’re just on a break. But at least this way I will have something to talk about at the swings.