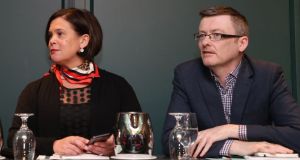 Perhaps I’ve lived a sheltered life but I’ve never heard a woman shout: “Up the Ra!”

Just what possessed former Republic of Ireland international Declan Rice to post that very slogan as a 16-year-old on social media (landing him in trouble when he switched allegiances to England four years later) is far from clear but his gender can’t be discounted as a factor. The same goes for David Cullinane (45) when he roared “Up the Ra” after his re-election as a Waterford TD for Sinn Féin – a move described last month as “not good” and “not helpful” by his party leader Mary Lou McDonald.

To a generation which has no memory of IRA atrocities, “Up the Ra” may seem more ironic than offensive but it’s also undeniably macho. Benignly, it could be categorised as part of what psychologist Jordan Peterson describes as the alpha male impulse to say something shocking or forbidden. More worryingly, it reflects the kind of threatening masculinity about which Anna Burns writes so powerfully in her Troubles-themed novel Milkman.

A further insight might be gained from the French philosopher Michel Foucault, for whom public identity is tied up with the struggle for power. “For Foucault, the relation of self to self, like relations of self to others and world, is a relation of power,” explains Dianna Taylor, a professor of philosophy at John Carroll University in Cleveland, Ohio, who has published widely on gender, race and sexuality.

Taylor’s latest book is Sexual Violence and Humiliation: a Foucauldian-Feminist Perspective, and she recently contributed an article on “Irish Republican Masculinities” to the fascinating Philosophical Perspectives on Contemporary Ireland. For the latter, she interviewed former republican prisoners in Northern Ireland to explore the role humiliation – especially that inflicted in custody – played in forging their identities.

The conception of the “daring and virtuous IRA man” in Irish history was shaped by “colonial feminising humiliation”, she argues.

“A number of Irish feminist historians and theorists have argued persuasively that traditional ideals of Irish republicanism are decidedly masculine in character, such that appealing to and asserting these ideals . . . becomes bound up with how one understands and relates to oneself as a man.”

While she says she “would not claim to be able to speak to Irish republican masculinity in all of its different and complex permutations”, the men she interviewed were inevitably influenced by the experience of humiliation but, at the same time, determined not to be defined by it.Their experience, moreover, can help us to understand other strains of masculinity today.

How is self-identity connected to power in Foucault’s view?

Dianna Taylor: “Foucault views power specifically as power relations, which are networks of interactions between and among individuals, institutions, groups, practices, and norms that together produce and establish modes of existence.

“Power relations generate meaning. They provide us with conceptual tools we can use to make sense of ourselves, others, and the world.

“For Foucault, our relationship to ourselves - what I refer to in my work as the ‘self-relation’ - refers not only our identities, but also to the very notion of what it means to have an identity or be a self. In his view, our self-relation is itself formed in and through… prevailing norms.

“One’s understanding of oneself as an Irish republican, for example, is possible because of - and in turn reflects - broader, normative ideas about Irish republicanism.”

You describe colonisation as ‘inherently feminising’. Why so?

“In my view, this feminising effect is not unique to the Irish situation. A number of postcolonial theorists see colonisation in general as a project of feminisation. This characterisation stems from the fact that colonisers see the peoples they colonise as inherently inferior, lacking in a full capacity for reason, and therefore in need of ‘proper’ guidance.

“This perspective is quite gendered, in the sense that women’s oppression has historically been justified – a justification that persists, albeit mostly in more implicit ways – on the basis of our purported inherent inferiority and, therefore, unfitness for public life, leadership, etc.”

Catholics and nationalists no longer experience the kind of ritual humiliation they once did in Northern Ireland. So how do you – or how would Foucault – explain the kind of ‘Up the ‘Ra’ posturing of some young people north and south today?

“Invoking the IRA can generally be construed as young men flouting authority in a way that seems particularly subversive. For young, middle-class men in the south, it might be compared to young, middle-class white men in the US who listen to gangsta rap: they are appealing to a mode of expression that seems to most flagrantly oppose and offend establishment norms and values.

“Within communities in the North that were most deeply affected by the Troubles, I think invoking the IRA functions more as a critique than a mocking – although it may also do that – of the establishment. Within a context where young men continue to experience social and economic disenfranchisement, as well as violence, appealing to the IRA can be seen as an expression of how the political establishment has not served working-class communities.

“I think that, in interesting ways, both expressions can be seen as implicitly reflecting what, in my view, is an ongoing romanticism of the traditional ideals of Irish republicanism and, therefore, Irish republican masculinity.”

Does a perception of humiliation lie behind what’s colloquially called toxic masculinity? If so, what can be done to address that perception?

“In the most general sense, I see toxic masculinity as an expression of the perceived or actual loss of what Kate Manne, in her book Down Girl: the Logic of Misogyny, refers to as ‘masculine-coded perks and privileges’.

“I think toxic masculinity expresses a sense that one is being denied not something one wants or even deserves, but something that one believes already belongs to one, so that one is effectively having something taken away.

“Humiliation is something very different: humiliating behaviours and conditions reflect a view of individuals or groups as less than fully human, a view that in turn both opens on to and legitimises treating them as if they are fixed in that subhuman status. The experience of humiliation involves internalising that view and the effects of that treatment.

“Given my Foucauldian view that the self-relation is formed in and through broader norms and relationships, it follows that some level of internalisation cannot be avoided.

“My work therefore emphasises that experiencing humiliation does not reflect weakness or ‘being broken’ - it does not reflect some failing on the part of the person or group that is humiliated. What humiliation reflects is the vile nature of the conditions and behaviors that produce and inflict it.

“What can be done about men’s perception that not receiving what they believe they are entitled to as men constitutes humiliation? I think first and foremost the very notion that men are entitled to anything having to do with women – our emotional resources and especially our bodies – needs to be exposed, challenged and eradicated. Feminist scholars and activists are doing this work.

“Moreover, the idea that resources like power and, especially, respect are the sole purview of men needs to be exposed, challenged and eradicated as well.”

An ethics prize on the theme of Covid-19 is being awarded this year under Irish Young Philosopher Awards. All second-level students and fifth- and sixth-class primary students on the island of Ireland are eligible to apply, with a closing date of May 18th.

Entrants can create a written or visual project on a moral question relating to the pandemic. Selected entries and winners will be published on the UCD Centre for Ethics in Public Life website and the awards website. For details see: https://youngphilosopherawards.ucd.ie/