Why do people believe in conspiracy theories?

Unthinkable: A study suggests social exclusion or loss of power may be a factor 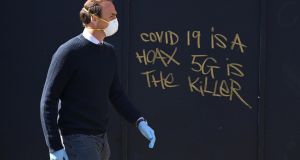 A man walking past graffiti in London. There has been a spate of attacks on the 5G network linked to erroneous claims that it is responsible for the spread of coronavirus. Photograph: EPA/Neill Hall

Conspiracy theories are usually seen as quaint and comical until they spill over into real life. The idea of the online investigator deep-diving in his underpants at 3am into the world of Area 51 and international espionage may make us smirk, but then people stop taking vaccines or start burning down telecoms masts and it’s not so funny.

There has been a spate of attacks on the 5G network linked to erroneous claims that it is responsible for the spread of coronavirus. Where these theories originate is far from clear, but there are common threats to their dissemination.

For the past 2½ years Stephen Murphy and Tim Hill have been “immersed in the conspiracy theory community”, attending their events, carrying out informal interviews and observing their social media use at home.

“Any crisis, pandemic or otherwise, is fertile ground for conspiracy theories because people search for easy explanations for something that appears unmanageable,” Murphy and Hill say. “Conspiracy theories allow people to believe there is a hidden structure to the world. They are fundamentally reassuring – a comforting ideological fantasy – since they propose that someone, somewhere, is in control, no matter how malevolent they may be.”

Alongside their research project they are planning an educational initiative aimed at second-level students in Ireland and the UK to promote critical thinking, especially on social media, and to raise awareness of the dangers of disinformation.

Before you start feeling too superior to the internet cranks, the research suggests a lot of us are susceptible to wishful thinking, and those who aren’t may be insulated by privilege.

Murphy and Hill say many of the participants in their study live in de-industrialised parts of England “and feel let down by the government who did not do enough to protect their jobs, and feel that the managerial class betrayed them”.

“They have also seen their own and their children’s living standards decline while the rich grow richer, profiting from their misery. For them the idea that Bill Gates engineered the pandemic to fuel demand for a vaccine from which Gates will personally profit from helps explain the deep patterns of prejudice, lack of recognition, and economic inequality they feel around them.”

Murphy and Hill explain further as this week’s Unthinkable guests:

Is social media accelerating the spread of conspiracy theories?

“To explain why ordinary people on Facebook are doing this it is important to understand that conspiracy theory communities and anti-5G groups are intensively competitive.

“A person’s status in the community is determined by building new and unmade causal explanations to events that occur in the world. This constant uncovering is expressed through a common cultural trope, seen on television and in the films we watch, which is the ‘heroic detective’. Those that dare to go further down the rabbit hole, uncovering additional links to obscure historical events and present world events, are celebrated within the community as heroic seekers of the truth.

“For people who are largely on the margins of society, this identity and prestige harbours invaluable social value.”

“The people who champion conspiracy theories are often dismissed as delusional, paranoid or crazy. These stereotypes motivate psychological research that explains these beliefs in terms of psychological characteristics or cognitive errors.

“While this desire to seek underlying psychological causes is understandable, it doesn’t provide a complete picture of why some conspiracy theories resonate with particular groups of people at specific moments in time.

“In this way, conspiracy theories can be treated like any other cultural narrative, or what sociologist Arlie Hoschchild calls a ‘deep story’, in which the facts of a story needn’t be true, but what matters is that the story feels true, and addresses particular anxieties, sadness or anger.

“The upside of analysing conspiracy theories as a distinct cultural narrative is that we can start to understand why most people believe in one type of elaborate conspiracy theory. We can even start to explain how the liberal centre, for whom conspiracy theories are stupidly simple explanations, have started to put forward their own stories of how British and American domestic politics are determined by links to Russia and the power of Vladimir Putin.

“Of course, this general feeling of Russia being all-powerful domestically is different to 9/11 and coronavirus truthers, whose stories are as baseless as they are comprehensive and detailed. Nevertheless, liberal conspiracy theories flourish because they mourn their loss of power and the rise of right-wing populists in the UK and the US.

“For people who have seen their leaders in power and their interests being championed for decades, invoking the concealed power of Putin is a reassuring answer to explain why they are not in power.”

Do you find conspiracy theorists are normally right or left of centre, politically?

“Because they cut across the political spectrum, conspiracy theories rarely place politicians as anything other than villains or puppets who are controlled by shadowy organisations working behind the scenes.

“The one notable exception to this is Donald Trump, who in the eyes of American QAnon believers is the hero in an elaborate conspiracy theory that claims there is a global network of Satan-worshipping paedophiles who control the world. Trump, they suggest, is the hero in this story, and that his election was the first step in breaking up this cabal.

“Yet being a saviour in a conspiracy theory is risky, since everything you say is under the spotlight and subject to scrutiny. Trump’s championing of not only 5G but its future replacement 6G caused consternation in the QAnon community, as well as the British anti-5G groups.”

What sort of response have you got from within the community? Do they object to being called conspiracy theorists?

“We use the term these people often use to describe themselves: ‘truth seekers’. Calling someone a conspiracy theorist is a way to dismiss their views.

“Using the term doesn’t help build the type of rapport that we need to talk to these people casually and be invited to their homes. Also, these communities often latch on to something that is true, and often comes from a place of personal or collective trauma.

For conspiracy theorists, they are heroic seekers of the truth who refuse and contest epistemic authority

“Within African-American communities, for instance, prominent conspiracy theories include the idea that the CIA was behind the Aids epidemic and government-sponsored vaccination initiatives seek to sterilise black men. To us these explanations may sound implausible, but their distrust of the medical authorities and the government reflects actual mistreatment by these authorities, and conspiracy theories seem plausible because they reflect patterns of exclusion and medical mistreatment.

“But the notion of being a ‘truth seeker’, of someone who rejects that which other people say is the truth, and orthodoxies also is aligned with Kantian enlightenment ideals. As Michel Foucault notes, Kant understood the enlightenment as a way out of ‘immaturity’, a state that sees us accept someone else’s authority.

“For conspiracy theorists, they are heroic seekers of the truth who refuse and contest epistemic authority. The spirit of the enlightenment animates their endless inquiries into what really is going on.”

John Stuart Mill replies: “That so few now dare to be eccentric marks the chief danger of the time.”