Life in a cocoon: separation anxiety, but a more peaceful pace 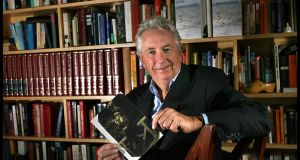 Peter Cunningham: “I’m not rushing to do the next thing, because there is often no next thing to do. The now is the realisation that there is no rush, and maybe never was.” Photograph: Brenda Fitzsimons

Not until my brother, a kind man in his early 60s, rang the other day and offered to collect my shopping did I realise I was old. I’m aware of my biological age, of course – my travel pass, pension and TV licence are all compliments of the State – but not until that call did I realise I am old.

It is a mystery. Like WH Auden, who, even when he looked like a dried prune, always thought of himself as the youngest person in the room, I don’t see myself as old. But now it’s different. Now it doesn’t matter that I think I’m 52, or, after half a bottle of wine, 32, because I’m 72, and for that reason I am confined to my home and garden under a sort of quasi house arrest, quaintly known as cocooning.

Cocoon, unsurprisingly, rhymes with womb, and describes the silky larvae spun as a covering by insects when they are in the chrysalis state. Cocooning in this crisis involves returning to a kind of infant-like dependence, a re-submerging in the amniotic bliss we once knew in utero and deep down know we never should have left.

We’re all trying to come to terms with what this means. We’re like time travellers in a spaceship – another kind of cocoon – receding at speed from the lovely planet we once knew just a few months ago and now so keenly miss. The word I hear most used is “crazy”. People say they can’t get their heads around it.

Even 50 years of Hollywood epics have not prepared us for what we’re going through: it’s happened with the speed of a nuclear war, and may yet be as devastating, without the need for iodine tablets. Just the other day we were booking our holiday flights and choosing the vegetarian meal option on the plane. Now we’re living in a cocoon. Crazy.

Everyone is waiting: waiting for a vaccine, a treatment, a test that will instantly show who’s got it and who hasn’t. I’ve been told it was like this from mid-1944, even in neutral Ireland, as each day news was eagerly awaited as the Allies advanced on Berlin. Waiting to hear the news that the tyranny was over. Waiting to hear that normal lives could be resumed. Three generations later, and again we’re waiting each day for news that this virus has been cornered, that its tyranny is at an end and our old lives can resume.

We do our shopping by click-and-collect. We click and pay; one of our daughters collects. She backs up to our door and stands away as I unload. We’ve been told that shopping is as dangerous as radioactivity, but that the virus will die if left isolated for 72 hours. So, like Zorro, in latex gloves and a face mask I separate the items into perishable and non-perishable. The former are washed or otherwise sanitised; the rest I lock away in a shed, like starving a rat.

Lethal germs are raging through technology too and, as with Covid-19, seizing a ready opportunity. After our first click and pay venture, a text came in, purportedly from our bank, asking for our log-in details and password. So much depended on getting the order verified that we almost complied. But it was a trick by thieves, trying to access our bank account. I entered the link on my laptop which nearly blew up in indignation and guided me back to safety.

For writers, self-isolation is normal. Writing is a powerful salvation at times like these, when the psychological benefits of a parallel, virus-free universe are considerable. But this isolation is not normal. As Neville Shute’s character in On the Beach discovered, to be a survivor means little without the company of others. I cannot envisage a future in which I am prohibited from hugging my children and grandchildren. It would not be worth living.

Otherwise, the days have acquired their own, peaceful pace. I find myself watching not as much news, worrying less about the future and living in the now. I’m not rushing to do the next thing, because there is often no next thing to do. The now is the realisation that there is no rush, and maybe never was.

Our vegetable seeds, acquired and planted weeks ago, are now little green plants, unconcerned that they have pushed up into a world tormented by plague. I see few planes in the sky, and no jet trails. The moon has waned, our housemartins have returned and the wind has gone into the south.

Dickens set A Tale of Two Cities in the crisis of the French Revolution where, even in the midst of the Reign of Terror, he found “the best of times, the worst of times” side by side. Here, into the second month of lockdown, despite the dark fog of bad news, the kindly concern and help, even at one remove, of family, friends, neighbours, and of people who before were almost strangers, shines through. Never has the familiar been so precious.

Some days are up, some down. The lengthening hours of daylight help to raise the spirits, although the enormity of what is occurring often outweighs hope. One warm and sunny morning last week, when my bleakness was having the upper hand, I heard a church bell. It floated in on the breeze from a little woodland church not far from here. I don’t know why the bell was ringing – in normal times that church opens only on Sundays. And yet the bell rang and rang. I sat on a step outside to listen, and as I did I felt a surge of hope.

I thought of bells down the centuries, calling not just to prayer, or to toll the dead, but ringing out the news of harvests saved, of the safe return of ships and the end of pestilence and war. Bells spoke to everyone, their solitary chimes travelling across valleys and over mountain passes, bringing hope to lonely, isolated communities. Their message was the one that mankind has ever wanted to hear. The message that we cling to in our darkest days. The message is: you are not alone.
Peter Cunningham’s new novel, Freedom is a Land I Cannot See, is published by Sandstone Press in June