The gospel according to Jordan B Peterson

While no new pearls of wisdom emerge from this controversial book, it is a useful endeavour 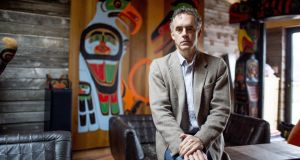 Jordan Peterson: “Beware of single cause interpretations . . . and beware the people who purvey them” Photograph: Carlos Osorio/Toronto Star via Getty Images

Book Title:
12 Rules for Life: An Antidote to Chaos

This is a book one is primed to dislike. The title for a start: 12 Rules for Life: An Antidote to Chaos. Why a dozen exactly? It’s so contrived, plainly a marketing ruse.

Then, there is the author’s ludicrously inflated biography: “Raised in the frigid wastelands of Northern Alberta, he has flown a hammer-head roll in a carbon-fibre stunt plane . . . ” it begins, under a photograph of Jordan B Peterson staring skyward.

On top of that one has to get past the social media noise surrounding this bad boy of North American academia: his occasionally ugly confrontations with campus liberals and the way he has been lionised in certain – predominantly male, 20-something – quarters.

However, it would be a shame to let all that stop you from reading what is a veritable powerhouse of a book: wise, provocative, humorous and also maddeningly contradictory (as all deep and truthful studies of human nature must be).

The first thing to say is there’s nothing new in this book. It is a distillation of grandmothers’ wisdom, Christian sayings and learned psychology and Peterson doesn’t pretend it to be otherwise. Addressing the reader, he says he hopes the book reveals “things you knew that you did not know you knew”. Elsewhere he scoffs at the notion of being a self-help guru. “Advice is what you get when the person you’re talking with . . . wishes you would just shut up and go away.”

The 12 rules turn out to be fairly conventional injunctions – don’t lie, look after yourself, don’t smother your children with worry, and so on. What gives them force here is the way Peterson links them back to what makes life meaningful. A clinical psychologist, he repeats the ancient but always unfashionable view that we are here on Earth to be morally responsible.

“Start to stop doing what you know to be wrong,” he writes – in a line that doesn’t sound so directional in Peterson’s meditative (if rather Russian) tone. Aleksandr Solzhenitsyn, a survivor of Stalin’s gulags, is his philosophical lodestar with Dostoyevsky, Tolstoy and Nietzsche not far behind. Doing your duty is not happiness, he barks with the tact of a Muscovite pensioner. “It’s payment of the debt you owe for the insane and horrible miracle of your existence.”

There are many other memorable passages. One that particularly stands out is where Peterson describes a period of soul searching 30 years ago when looking for something in which to believe – anything of certainty. And he started to reflect on a practice at Auschwitz about which he had read.

Has the idea of relativism ever been discredited in such a stylishly compact fashion?

When he moves on to political matters, Peterson is on shakier ground. He rightly contextualises today’s injustices against the backdrop of the abominations of the last century. Compared to nazism and communism, Trump and Brexit are mere passing disturbances (Peterson name checks the US president just once). But, in the same breath, he loses perspective when portraying “social justice warriors” as the greatest threat to western civilisation.

His contention that the mental health of young men is in decline – “boys are suffering, in the modern world” – deserves serious attention but, to ask a Petersonian question, how do we know they are suffering any more now than in the 1970s, 1910s or 1800s? Surprisingly for a social scientist, he offers no evidence of a downward trajectory – no research or peer-reviewed work to back the claim – other than what he has personally “seen” in university students.

His assertion that increased male alienation can be traced to the feminisation of society is even more poorly sourced. Is excessive mothering really causing men more angst than, for example, the disappearance of traditional male jobs, or greater workplace insecurity?

“Beware of single cause interpretations,” he says “and beware the people who purvey them”. He might easily be writing about himself.

Only one rule really applies: do not be boring

Moreover, if men are suffering to a greater extent today then isn’t this the kind of thing they need to suck up stoically to atone for the “sin of Being”? If people should stop whining about society’s faults and focus first on personal development – as Peterson emphasises (“men have to toughen up”) – then surely the last thing an alienated young man should do is start blaming activists.

A charitable reviewer would say Peterson is allowing us to analyse him at such junctures. The author admits to being attracted to competitive, male conversation where you say anything “either true or funny”, no matter how unsettling or outrageous. “Only one rule really applies: do not be boring.”

It’s a maxim Peterson seems to take seriously, whether he is poking fun at cat owners, or lambasting the Disney movie Frozen for being “deeply propagandistic”. Peterson ends the book by sending his thanks to God; one reasonably assumes this is a joke.

In his comedy act, Tommy Tiernan tells a gag about visiting a psychiatrist so he can get some sleep. And, as he tells it, the psychiatrist also beds down for the hour. Why? Because men are fundamentally tired. Whatever the truth of that, a bit of time spent with Peterson on the couch, on the train, or wherever you like to read, will almost certainly wake you up in ways that are only good.