Ireland has a strange relationship with the word ‘republican’

Unthinkable: Ireland’s conception of republicanism is outside of the European norm 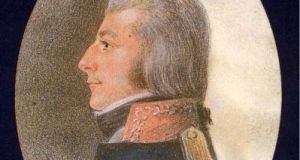 Wolfe Tone is the recognised father of Irish republicanism.

Ireland has a strange relationship with the word “republican”. It was first associated here with Wolfe Tone’s campaign for Irish self-determination, and later became synonymous with the struggle for Irish independence. But, with the end of the Civil War and the declaration of Ireland as a Republic in 1949, republicanism became a more contested concept.

A rough shorthand emerged during the Troubles whereby those seeking a united Ireland by peaceful means were labelled nationalist, whereas those supporting paramilitary violence were republican. Yet today defenders of the IRA’s “physical force republicanism” are seen as unfit coalition partners by the largest party in the State, which officially calls itself Fianna Fáil – the Republican Party.

The conception of republicanism as “a radical and potentially violent sub-species” of nationalism is “atypical” in a wider European and historical context, political scientist Dr Adam Fusco says.

From a continental perspective, republicanism “was conceived as a distinct body of political thought with its own unique philosophical foundations in a theory of freedom and government”. To understand the concept better, says the Belfast-born lecturer, we need to first decouple republicanism from nationalism in the Irish mindset.

Doing so can pave the way for a new Irish republican theory which, he argues, can be a resource for unionists as much as nationalists. If republicanism is understood as freedom from “arbitrary power”, then forcing unionists into a united Ireland against their will would not satisfy republican principles.

Fusco, who is based at the University of York, is one of the contributors to an impressive collection of essays, Philosophical Perspectives on Contemporary Ireland, recently published by Routledge. Edited by UCD academics Clara Fischer and Áine Mahon, it brings together researchers across a range of fields to highlight a richness of philosophical thought in Ireland – and about Ireland – which typically goes under the media radar.

Fusco explains his research further as this week’s Unthinkable guest:

How do you define republicanism in the classical sense, and how does it differ from nationalism?

Adam Fusco: “Classical republicanism as a political idea goes back to ancient Rome and was later developed in the Italian Renaissance, English Civil War and the American Revolution. I follow the historian of political thought Quentin Skinner and the political philosopher Philip Pettit – himself a Galway native – who draw on this tradition and define republicanism in relation to the value of ‘freedom as non-domination’.

“This is the idea that individuals are free when they are not subject to the ‘arbitrary power’ – or domination – of another person or form of arbitrary political authority. This explains classical republicanism’s opposition to monarchy, as even a monarch who rules justly still has the power to change their mind and coerce their subjects arbitrarily.

“The classical republican tradition emphasised that a free person must live in a ‘free state’ – one ruled by the ‘rule of law’ as opposed to the arbitrary ‘rule of men’, typically under a mixed constitution.

“What marks this as distinct from nationalism is that the classical republican idea of the free state does not presuppose any answer to the question of who are the people that should form this state. For nationalism, there is only one answer to this question: the nation. Whereas, for republicanism the external boundary of a free state could be drawn in many different ways.”

Why have republicanism and nationalism been conflated in an Irish context?

“There are complicated historical reasons for this. There is historical evidence to suggest that figures in organisations such as the United Irishmen believed in something close to the republicanism that I’ve outlined. They identified arbitrary power on the part of the British crown in Ireland in a manner similar to the American colonists at the end of the 18th century.

“Throughout the 19th and 20th centuries, Irish nationalists who wanted to break the link with Britain using force conceived of themselves as republicans because they were aiming to successfully replicate the act of the United Irishmen to create an independent Irish state. They were not replicating this act, however, to overcome arbitrary power in and of itself, but for a different reason – to assert Irish nationhood.

“In terms of the wider European context, republican ideas are to be found in the late 18th century, whereas nationalist political thinking and activity emerged in the mid-19th century, but these remained un-delineated in the case of Ireland.”

Would Irish unification in current circumstances be anti-republican?

“It depends on what unification would look like. In the book chapter, I argue that Irish unification is one option among many to satisfy republican principles in the case of Northern Ireland.

“It is conceivable that some version of the union with Britain could also satisfy republican principles, as could other arrangements involving both the British and Irish states in a confederation of these islands. From the perspective of republican liberty, neither of these options is definitively more desirable than the other.

“One worry I do have about a united Ireland in the current circumstances, however, is that it tends to be conceived in terms of subsuming Northern Ireland into the contemporary Irish state. What I think needs to be up for discussion is whether Northern Ireland would still exist as a devolved entity within a unified Irish state, if unification should serve as a moment to adopt a new constitution for the whole island, and how political relationships with Britain would be maintained in this scenario.

“This could, for example, serve as a moment to create a supranational association between Britain and Ireland similar in stature to the European Union or the Nordic Council.

“What is essential to consider about a united Ireland is how its constitutional framework would not institute any relationships of arbitrary power – for instance, that unionists do not become regular or permanent minorities in the new state.

“This potentially applies to northern nationalists also, who could be considered akin to the citizens of the former East Germany, who despite having had a generally positive attitude towards reunification have found themselves subject to new social, economic and political problems.”

Could continuing British sovereignty over Northern Ireland satisfy republican principles? If so what would need to change?

“Even with devolution, there is an argument that Northern Ireland is still subject to arbitrary power in the UK constitution. This is because devolution does not apply to all issues, and because Northern Ireland representatives rarely, if ever, take part in forming and directing the UK government.

“On reserved issues Northern Ireland is still effectively subject to direct rule. The UK constitution would need to change to overcome this arbitrary power. This could be through a mixture of reforms including the UK changing to a proportional electoral system, the federalisation of the state – including England into constituent regions – along with the associated decentralisation of economic power from outside of the south-east of England.”

You raise the intriguing prospect of a unionist republicanism emerging. What exactly would that look like? Would it mean, for example, advocating for the abolition of the British monarchy to facilitate UK federalism?

“Because I argue that republicanism is not reducible to unification in the context of Ireland, republican political principles can be resources for unionists just as much as they are for Irish nationalists.

“As things stand, of course, many – if not most – unionists are also nationalists: British and sometimes Ulster nationalists. It is possible, though, that unionists could adopt a republican language to articulate and defend the union. This would involve criticism of the status quo, but it would be criticism intended to strengthen the union – a union which is at present encouraging some in Northern Ireland to consider reunification when they had not before.

“It may be a psychological leap too far for many unionists to criticise central aspects of the British constitution, such as the monarchy and its contemporary analogue in supreme parliamentary authority. However, I only wish to argue that the union can be articulated in these terms. Indeed, I suspect that if it were, this would encourage Irish nationalists to reimagine and articulate a united Ireland in terms of republican liberty.”

How free are you in a republic?

Philip Pettit replies: “The republican image of freedom offers a moral compass for identifying what we should expect our country to do for us – and for the world – and what we as a citizenry should do for our country.”