Borgen is back, and on Netflix: Danish political drama to return with new series 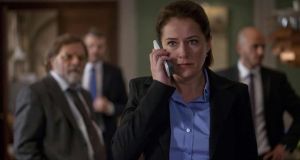 Netflix is bringing Borgen back to our screens more than a decade after the Danish political drama first aired.

Netflix has partnered with DR, the Danish Broadcasting Corporation, to film a new eight-episode series of Borgen that will be made available globally in 2022. The streaming giants also intends to make the first three seasons of the drama, which aired from 2010 to 2013, available later this year.

The new series will again follow Nyborg, her staff and the media that cover her, this time in her role as Denmark’s foreign minister. Meanwhile, Fønsmark heads back into journalism, having been Nyborg’s head of press, where she is a news director for a nationwide television station.

“We are very excited that we in partnership with Netflix are able to bring Borgen and its characters back to life,” said Christian Rank, drama director at DR, which will air the new series in Denmark before Netflix streams it globally. “We look forward to revisiting the universe and the characters to tell a current and highly topical story about a hot political topic with international implications.’’

Borgen was one of a triumvirate of break-out Scandi shows, including The Killing and The Bridge, which pushed previously niche subtitled foreign dramas into mainstream viewing on British TV.

“Ten years ago Borgen helped redefine the global television landscape, showing that great stories can come from anywhere and be loved everywhere,” said Lina Brouneus, director co-production and acquisition at Netflix. “We are immensely proud to partner with DR and the whole creative team to bring this worldwide phenomenon back and to give Borgen’s legion of fans the chance to be gripped once again.’’

Netflix has also commissioned a new series, called Social Distance, that will be produced entirely remotely with all cast and crew working from their own homes. The series is being executive produced by Jenji Kohan, the creator of Netflix hit Orange Is The New Black.

“We’ve been inspired to create an anthology series that tells stories about the current moment we are living through, the unique, personal, deeply human stories that illustrate how we are living apart, together,” said the show’s producers.

“We are challenging ourselves to do something new: To create and produce virtually so that our cast and crew can stay healthy and safe.” – Guardian

Britain and Europe in a Troubled World: A wise guide to Brexit
3