Coronavirus: Is there a hidden purpose to the pandemic?

Unthinkable: People – even atheists – tend to think things happen ‘for a reason’ 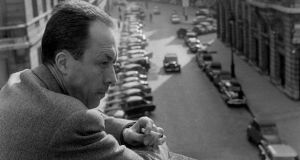 One of the themes of Albert Camus’s philosophical novel The Plague is how to make sense of natural disasters. The book, part-allegory of the Nazi occupation of France, is set in the Algerian city of Oran in 1940s and examines what happens to a collection of people when a deadly disease sweeps through their midst.

Two of the protagonists are Fr Paneloux, a Jesuit priest who declares from the altar that suffering is all part of God’s plan, and Dr Bernard Rieux – the Mike Ryan of this drama – who has no time for such speculation. “For the moment I know this,” Dr Rieux says, matter-of-factly; “there are sick people and they need curing.”

Fire and brimstone sermons may be less common now but the sentiment underpinning Fr Paneloux’s thinking lives on in more secular times. Psychologists call it promiscuous teleology, the tendency to believe there is a hidden purpose to everything.

We almost certainly evolved as a species to have this bias. According to Holocaust survivor and therapist Viktor Frankl (referenced recently in a column by Fintan O’Toole in the context of the Covid-19 pandemic), the search for meaning literally keeps us alive.

Agreeing with this up to a point, American psychologist Jesse Bering says the “belief instinct” is innate but, as a committed atheist, he argues it is something we should grow out of.

In a recent example of promiscuous teleology, UN environmental chief Inger Andersen described the coronavirus pandemic as part of nature’s way of “sending us a message”. Among environmentalists it is not uncommon to think of Mother Nature or Gaia as a hidden spirit overseeing human affairs.

The Understanding Unbelief social science team has surveyed atheists and agnostics across the globe. A key finding from their interim report is that “unbelief in God doesn’t necessarily entail unbelief in other supernatural phenomena”.

While atheists and less so agnostics “exhibit lower levels of supernatural belief than do the wider populations”, a minority of both atheists and agnostics come across as “thoroughgoing naturalists” in the survey.

American atheists are least likely to believe in supernatural forces, the report says, but only a third entirely reject belief in the afterlife, karma or the idea that significant events are “meant to be”. Among Chinese atheists, the proportion entirely rejecting such supernatural thinking is as low as 8 per cent.

“I would not go as far to say that this reveals a ‘belief instinct’,” says Dr Jonathan Lanman, one of the project leaders and assistant director of the Institute of Cognition and Culture at Queen’s University Belfast. Only a small minority of atheists voice faith in the mystical, he points out. “However, I do think the fact that the majority of unbelievers in God show belief in at least some supernatural phenomena tells us some interesting things.”

First, he says, “we are used to most public voices of atheism being strongly committed to science, reason and a naturalistic worldview. But there are a great many people who do not believe in God but who find this worldview unconvincing, suggesting there are other factors motivating their non-belief in God.

“Second, while I do find ‘instinct’ misleading, these findings are in line with work in the cognitive science of religion suggesting that a number of distinct cognitive mechanisms support various supernatural beliefs.

“For instance, developmental psychologist Deborah Kelemen has shown that both children raised in non-religious homes as well as Ivy-League professional scientists show some unconscious bias towards believing that natural phenomena and events have a purpose rather than just being contingent facts of nature. Such a bias could make the belief that significant events happen ‘for a reason’ compelling, even if this bias may have little to do with explaining other supernatural beliefs, such as an afterlife.”

The research reminds us that unbelief is more complex than is commonly assumed in western culture wars.

In a perhaps dispiriting finding for disciples of Richard Dawkins, the study shows relatively few atheists are happy to self-identify as such. In every country in the data set, only a minority of those who say they do not believe in God choose the label “atheist” as their preferred identity term (it is as low as 19 per cent in Denmark).

One reason for this, Lanman says “is that there are often negative social consequences to identifying as an atheist”, with countries such as the US and Brazil showing “high levels of anti-atheist prejudice”. Another reason is “the term ‘atheist’ has connotations of being somehow ‘against religion’ and that’s not something that automatically comes with not believing in the existence of God”.

Lanman says we “need to separate self-identification on the God question, identification with a religious tradition, and actual belief in the existence of God. These are all different things, and you will err quite quickly if you think that knowing one of these about a person tells you about the others”.

Fr Paneloux and Dr Rieux find themselves acting as one in trying to “flatten the curve”. Whether or not there’s a reason for suffering becomes immaterial

An obvious error is to assume that either a religious or a non-religious label tells you about a person’s character. The Understanding Unbelief survey found there was very little difference between the expressed values of believers and unbelievers. “We often exaggerate the role of religion in providing people with moral values,” says Lanman, who plans to release the final results of the study with his fellow researchers next year.

In the meantime, Camus conveys concurrent wisdom in The Plague, a novel that is enjoying a sales revival with the spread of the coronavirus. As the drama progresses, Fr Paneloux and Dr Rieux find themselves acting as one in trying to “flatten the curve”. Whether or not there’s a reason for suffering becomes immaterial. All that matters, Camus writes, is to take “the path of sympathy” and to try to bring some relief.

What do we learn in a time of pestilence?
Albert Camus replies (via Dr Bernard Rieux): “There are more things to admire in men than to despise.”