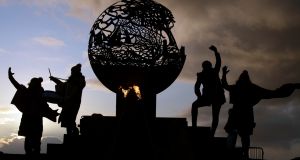 Members of An Spidal community cast of fire bearers getting ready for their fire lighting ceremony. Photograph: Andrew Downes, XPOSURE.

The opening ceremony of Galway 2020, which was due to take place on Saturday evening, has been cancelled due to bad weather.

The organisers said on Saturday morning they were “extremely disappointed” to announce the cancellation due to the “severe national weather warnings in place for the whole of today, tonight and tomorrow”.

“We are saddened for the community cast, our volunteers and the whole team who have worked so hard during the last weeks and months.

“Today’s event would have marked the finale of what has been a hugely successful week-long series of events on the Fire Tour of lighting ceremonies that have lit up towns across the county,” it said.

Thousands had been expected to attend the official launch of the event to mark Galway’s year as European Capital of Culture. Capacity for the free event was 28,000, with scope to increase to 45,000.

Met Éireann had issued a status orange wind warning for Galway, with gusts of up to 120km/h expected ahead of the arrival of Storm Ciara over the weekend. The warning was due to last from 1pm to 6pm on Saturday .

An orange wind warning for the entire country was also later issued by Met Éireann on Saturday, which will come into effect at 5am on Sunday.

A large-scale fire-lit themed opening ceremony had been planned at South Park in the city’s Claddagh.

President Michael D Higgins, along with other Irish poets, artists and musicians, was due to take part in a “fire and flame” opening devised by a local team and Wonder Works, a UK events company which has worked on Olympic ceremonies. More than 500 locals, including community groups, choirs, chanters and drummers were due to have been involved.

Saturday evening’s 6pm ceremony was designed to be the culmination of smaller fire ceremonies this week in Clifden, Spiddal, Tuam, Ballinasloe, Portumna and Athenry. Six hand-carved steel “town spheres” were due to arrive at South Park, joined by the city’s sphere, transforming into giant glowing orbs, lighting up the headland. In the bay, Galway hooker fishing boats were due to be lit up.

Chief executive of the festival Patricia Philbin had earlier acknowledged some projects at the festival will have to be scaled back if further funding for its programme does not materialise.

Galway 2020 is extremely disappointed to announce the cancellation of the finale of our Opening Ceremony this evening due to the severe national weather warnings in place for the whole of today, tonight and tomorrow.

While she is confident the full European Capital of Culture programme can all be delivered – despite a question mark hanging over some funding – some elements would be on a smaller scale, she said.

The now cancelled opening ceremony had been intended to kick off a year of the largest and most complex series of cultural events in Ireland, themed on language, landscape and migration. After more than a year of problems, including funding difficulties and departures at the top, Ms Philbin and creative director Helen Marriage along with head of programme Marilyn Gaughan Reddan unveiled the programme in September 2019.

Late last month, Galway City Council deferred a decision on granting an extra €2.5 million to Galway 2020, after heated exchanges about why it was required.

The city council had already committed €6 million, joining €4 million from Galway County Council and €15 million from the Department of Culture. Additional funds and in-kind sponsorship are pledged from State agencies and institutions in the west.

Private sector fundraising has contributed €2 million, including cash and benefit-in-kind, Ms Philbin confirmed this week. Fundraising will continue throughout the year, she said, and the original €7 million “remains the target”. She expects fundraising to gain momentum as events kick off and organisers are identifying other fundraising opportunities. “It’s about people in the city and the county showing pride in their area and making the most of the opportunity as capital of culture.”

The funding decision comes back to the council at its next monthly meeting on Monday. The additional money would go towards “further large-scale international events, over and above the bid book programme”, she said.

“We’re confident we can deliver on the projects [already planned]”, Ms Philbin said but she would not be drawn on which events might have to be curtailed.

Accusations of a lack of clarity on spending is “misinformation”, she said. “Galway 2020 has quarterly service-level agreements with both city and county councils and a performance delivery agreement with the department, and is independently audited quarterly.”

Galway 2020, European Capital of Culture is a year of more than 1,900 events across 154 projects, with local, national, European and international artists and cultural organisations, in villages, towns, on islands and in the city.

3. A new work by American artist David Best (Burning Man) uniting young people north and south of the Border, May.

4 An epic telling of Gilgamesh by Macnas, written by Marina Carr and designed by Julian Crouch, (April, June, November, December).

5. Syngelines, a JM Synge festival in Galway and Aran, September.

7 Pan-European Crossing the Line festival of work by artists with intellectual disabilities, May 20th-23rd.

Netflix’s Rebecca: The new Mrs de Winter isn’t a patch on the first one
3

50 scary films to watch at Halloween
5