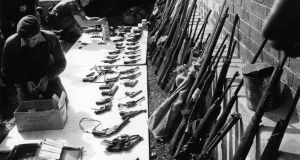 July 1970: British soldiers sort through a weapons cache in Belfast. The IRA’s southern leadership had stood accused of running its military capacity down to a point where it could not defend Belfast Catholics in August 1969. Photograph: Malcolm Stroud/Express/Getty Images

A walk-out at the Sinn Féin ardfheis became front-page news in 1970 with the emergence of republicans owing allegiance to a new IRA “Provisional Council”. The heated dispute at the party’s conference involved the “principle” of parliamentary abstentionism: refusing to recognise the legitimacy of the “partitionist” parliaments in Leinster House and Stormont. Sinn Féin representatives, if elected as abstentionists, were not allowed to participate in them.

However, the underlying ideological tension at the January ardfheis hinged on the Cold War: Western “freedom” versus Soviet-style “dictatorship”. The Provisionals accused the leadership – or “junta” – of trying to turn Sinn Féin into “another political party seeking votes at all costs” under the direction of Moscow-led communists.

Even though the party had no TDs, or MPs, Sinn Féin’s publicly-aired divisions were significant because the IRA had split. The IRA’s leadership stood accused of running its military capacity down to a point where it could not defend Belfast Catholics in August 1969. Seán Mac Stíofáin defined the Provisional IRA’s mission: to remove the British presence in the North and establish the Irish Republic by “force of arms”.

The delegates who walked out of the ardfheis were angry with the party leadership for attempting to overturn its position on abstentionism. Adherents of the physical-force tradition were disturbed at the leadership’s efforts to prioritise political struggle, thereby downplaying the IRA’s role. They feared participation in a National Liberation Front would result in a communist takeover of the republican movement.

With Cathal Goulding and Seán Garland in the driving seat, the IRA leadership in the 1960s attempted to steer republicans away from the militarist focus on partition – the Border in other words. As part of this reassessment Goulding enlisted intellectuals such as Roy Johnston, who had been a member of the communist party in Britain. Significantly, republican “old faithfuls” believed that his cohort were communists first and foremost.

Republicans took up issues such as housing and civil liberties. And the civil rights campaign initially proved to be spectacularly successful in drawing international attention to Northern Ireland’s inbuilt sectarianism. Many left-wing Sinn Féin activists, more than happy to work with young communists in the Connolly Youth Movement, for example, were glad to see the back of traditionalists at the ardfheis. But most Belfast republicans, according to Gerry Adams, had turned against the IRA’s leaders following the August violence: they were “out of touch” with northern realities. Refused entry to the ardfheis in Dublin, Adams joined an anti-apartheid march instead.

The Provisionals soon made clear their hostility to Soviet-inspired communism. In February they launched their own publication, An Phoblacht, and listed the differences with the now-Official republican movement. These included recognising the Stormont, Dublin and Westminster parliaments; adopting socialism so “extreme” that it would result in dictatorship; and failing to provide the maximum possible defence for “our people” in the North.

An Phoblacht contended that before the split republican policymakers and “masterminds” included some who had joined from the communist party. Co-operating with communists in a National Liberation Front could only end in disaster: “We know that in other countries that have come under the control of organisations similar to these ‘radical groups’ totalitarian dictatorship has been the outcome. We have no reason to believe that the result would be any different in Ireland.’”

Traditionalist republicans perceived Marxist socialists – promoting an “alien ideology” – as having little in common with past revolutionary heroes. They did not see themselves as conservative on economic questions, but were suspicious of what they believed were political adventures and the then-fashionable language of world revolution. The first public opposition to the pre-split leadership had been expressed in July 1969 by a veteran Belfast republican, who claimed that “one is now expected to be more conversant with the thoughts of Chairman Mao than those of our dead Patriots”.

Traditionalist republicans found a platform in The Voice of the North, a paper bankrolled by a faction in the Fianna Fáil government. Belfast Provisionals – who served “neither Queen nor Commisar” – spelled out the dangers of the “alien ideology” for Irish republicanism. The pre-split leadership, they stated, had attempted to replace the programme of Wolfe Tone and James Connolly with “the foreign socialism of Marx and Mao”. If this had gone unchecked, their argument went, the “traditional” IRA would have been replaced by the “so-called National Liberation Movement, including Communist Party members”.

At its first ardfheis, Provisional Sinn Féin’s president, Ruairi Ó Brádaigh, said the party did not see a “Marxist Socialist Republic” as the solution to Ireland’s problems; it had rejected “a takeover bid by extreme Marxist elements last January”. Mac Stíofáin later spelled out the central difference between the two IRAs: “The Officials say unless you have mass involvement of the people you haven’t got a revolution. We say, the armed struggle comes first and then you politicise.” For Goulding, however, the republican movement had split over “the communist issue”.

Garland later addressed the allegation that left-wing republicanism constituted an “alien ideology”. Tone had been inspired by the French Revolution, he argued, and Irish revolutionaries should cherish internationalism. The cause of Ireland, as it were, was the cause of Vietnam, Palestine and South Africa: “If it is alien to recognise the common humanity of working people struggling for freedom everywhere in the world, then call us alien and be damned.”

The Official IRA had previously stated that it did not want to wage a military campaign against the British army at the expense of political struggle – it declared a ceasefire in May 1972. Its republican detractors had been proved right.

However, from the late 1970s, the Provisional movement became increasingly influenced by Adams, who emphasised that “armed struggle” had to be complemented by political activity. When hunger striker Bobby Sands was elected to the British parliament in 1981, the Provisionals decided to contest elections in the North. Sinn Féin, now the only party claiming this title, won 10 per cent of the vote in the 1982 Assembly election. Ironically for Ó Brádaigh – he had been displaced by Adams as president – the party reversed its position on abstentionism in 1986.

More irony followed when the Provisional IRA’s military operations came to an end in 1997. Sinn Féin had a non-abstentionist TD elected the same year. And many more followed him. Its challenge is now to win enough Dáil seats in order to be invited into a coalition government, while, simultaneously, participating in a Stormont executive. But one question remains. Does Sinn Féin’s focus on partition handicap it south of the border?
John Mulqueen is the author of ‘An Alien Ideology’: Cold War Perceptions of the Irish Republican Left, published by Liverpool University Press