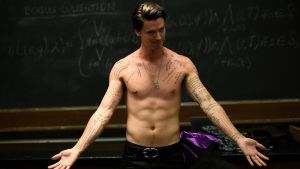 Adam Egypt Mortimer’s horror thriller fits the bill, while being its own very creepy thing

We’re introduced to Luke (Griffin Robert Faulkner), as a sensitive and lonely eight-year-old boy who, upon witnessing the aftermath of a mass shooting, is befriended by Daniel (Nathan Chandler Reid). Nobody else can see or hear Luke’s new chum, but it seems like a harmless enough invention until Daniel suggests they do something awful to Luke’s emotionally unbalanced mother Claire (Mary Stuart Masterson). Consequently, Claire suggests that her son visualises Daniel in an old family dollhouse and there he remains until adulthood, when an imposed grown-up Daniel (Schwarzenegger) returns from the Freudian depths to protect a fragile Luke (Miles Robbins). Suddenly, Luke has a lot more swagger and two love interests, including conceptual artist Cassie (Sasha Lane) and fellow student Sophie (Hannah Marks). Daniel, however, is becoming increasingly dominant in their shared body. (The film is from the producers of Mandy, so you can be certain of something more high-fallutin’ than Basket Case 2). But just as though it looks like the id is about to stage a coup, a troubling Oedipal subplot adds a strange, disconcerting new dimension and Cronenbergian body horror SFX, both of the practical and CG kind.