Why the new Lara Croft doesn’t use a gun

Hollywood is decommisioning its firearms. Today’s heroes use claws, a hammer or a bow 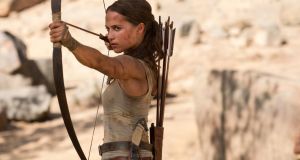 Will Hollywood ever end its love affair with guns? It was as predictable as a Transformers sequel that, in the wake of the Parkland school shooting, somebody would blame violent movies. Usually the NRA is quick to accuse, but this time Donald Trump himself pointed the finger.

Statistics do show that gun violence on screen is still high, especially in PG13-rated movies, which actually feature more guns than those rated R (17 years and over), according to one recent survey. However, in a great many mainstream movies, firearms are no longer cool.

Traditionally, Hollywood has been passionately pro-gun, whether in westerns, war movies or crime thrillers. Movies have often functioned as product placement for the industry. Where would Dirty Harry be without his .44 Magnum? Or James Bond without his Walther PPK? Or John Rambo without his ammo belts and giant machine gun?

You can even cross-reference all this on the Internet Movie Firearms Database, which lovingly details every model, annotated with grabs from the films. Rambo’s gun was an M60. But as a measure of how things have changed, witness Rambo’s 2008 comeback, whose scenes of Stallone senselessly mowing down scores of faceless Burmese assailants had audiences retching into their popcorn rather than punching the air.

Look, too, at comic-book adaptations. Superheroes get shot at all the time in modern blockbusters but rarely return fire.

Black Panther and Wolverine have claws, Thor has a hammer, Spider-Man has webs, the Hulk has, well, himself. Some of them, such as Batman, have a strict anti-gun code, while Wonder Woman sees guns as symptoms of masculine aggression.

The only way to play gun violence these days is massively over the top, as with movies such as Baby Driver, Free Fire, John Wick, Shoot ’Em Up or the action-hero retirement fund known as The Expendables.

But protagonists across the board are laying down their weapons. Look closely and the likes of Matt Damon’s Jason Bourne and Tom Cruise’s Ethan Hunt have barely fired a gun in their later movies.

Elsewhere, the Fast and Furious crew generally let their vehicles do the phallic overcompensation. In the Star Wars universe, real showdowns are settled with old-school lightsaber duels rather than pew-pew laser guns. And heroines such as The Hunger Games’ Katniss and Alicia Vikander’s Tomb Raider would rather use a bow and arrow.

Even Mel Gibson, Mr Lethal Weapon himself, recently repented with Hacksaw Ridge, a story about a real-life soldier who refused to pick up a firearm. So let’s not pretend “the movies” are the problem. Increasingly, what they’re telling us is that a good guy with a gun is not the only way to stop a bad guy with one.

Tomb Raider is in cinemas from 16 March