The Scottish film-maker on her taut new film starring Joaquin Phoenix, watching movies with her mum, and the awkward fallout from that Natalie Portman flick 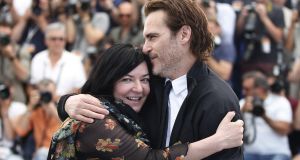 “It was a different direction for myself and Joaquin as well,” director Lynne Ramsay with Joaquin Phoenix. Photograph: Guillaume Horcajuelo/ EPA/ REX/Shutterstock 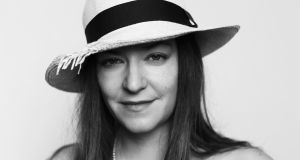 Director Lynne Ramsay: “Every director I know has had a crazy experience.” Photograph: StudioCanal

In spring of 2013 Lynne Ramsay, the award-winning director of Morvern Callar and We Need toTalk About Kevin, walked off the New Mexico set of the Natalie Portman picture Jane Got a Gun, two days before she was due to start shooting. Original cast members Michael Fassbender, Bradley Cooper and Jude Law followed the Scottish auteur out the door. The fallout was noisy: a breach of contract and fraud complaint filed by producers in the months that followed sought more than $500,000 in damages, and called the Glasgow-born filmmaker “abusive” and “disruptive”. All parties settled quietly and out of court by the following spring, but not before Ramsay heard crass jokes about her “being on her period”.

It’s hard to reconcile words like “abusive” and “disruptive” with the softly-spoken, unassuming director. Last May, when You Were Never Really Here premiered at Cannes, she responded to this newspaper’s query about the film’s economical length with characteristic good humour: “I didn’t want to bore you all at Cannes,” she smiled. “There’s nothing worse than being at the end of the festival and watching a two-and-a-half-hour-long films with self-indulgent scenes. All of my films are 90 minutes. Though they might feel like two hours to some people.”

Today, as the same taut thriller debuts at this year’s Dublin International Film Festival, Ramsay is both philosophical and surprisingly cheery as she recalls the aftermath of Jane Got a Gun, and a departure she has always simply attributed to “creative differences”. Was she ever concerned that the incident might tarnish what had been a glittering reputation?

“Not really,” smiles Ramsay. “I guess I’m not on social media. I didn’t see the fallout. I just thought I’ll pick myself up and get on with it. Every director I know has had a crazy experience. Lots of directors have worked on a film for five or six years and then had it taken off them. Or somebody else came along and made a successful movie of something they had been writing. It’s one of those jobs, you know. Things don’t always work out. It’s a pattern. You prep and prep. But all my energies ended up going into the next one.”

They sure did. You Were Never Really Here, which won two major prizes at Cannes – the festival’s best actor award for star Joaquin Phoenix and the best screenplay award for Ramsay – looks certain to silence the writer-director’s critics. An intense New York revenge-cycle, the film sees Joe, Phoenix’s damaged mercenary, dispatched to rescue a politician’s underage daughter from a brothel.  The mission is far more complicated than what it seems.

“Jonathan is just a great writer and normally very humorous,” says Ramsay of Jonathan Ames, who wrote the source novel but who is better known as the creator of Bored to Death. “This was a different direction for him. It was a very strong page-turner and I wanted to carry that quality into the film. But it was a different direction for myself and Joaquin as well. We’ve never done an action film or anything like this. Whatever this is.”

That’s a good question. As ever, Ramsay is very much her own director. She notes the late Bill Douglas as a possible Scottish antecedent and the influence of such free-wheeling neorealistic classics as John Cassavetes’ A Woman Under the Influence but she equally acknowledges the impact of “those films that sear images into your brain: Blue Velvet, Repulsion, Persona, Nicolas Roeg. A good filmmaker can be a bit like a psychologist.”

You Were Never Really Here is something else again. The film shares recognisable DNA with such dirty thrillers as Taxi Driver and Death Wish. Ramsay’s location manager Sascha Springer, a native New Yorker who she compares with Fran Drescher in This is Spinal Tap, somehow scoped out parts of the city that seem largely unchanged since the 1970s. A sense of fevered panic, powered along by Jonny Greenwood’s score and Phoenix’s performance, was partly assisted by the logistics of the shoot.

The director and Phoenix didn’t meet for the first time until the actor showed up to shoot following the sudden postponement of another project he was attached to. The production lasted only 29 days. Ramsay rewrote the script and Phoenix improvised as they went along. His dishevelled appearance allowed them to shoot across the city without anyone recognising him.

“He looked like a construction worker,” says the director. “So that added to the crazy energy, too. Films don’t happen overnight. But this one almost did. The script was already in quite good shape. I was at Cannes the year before and the next minute there was a bidding war. That had never happened to me before. And then Joaquin became available and my producer Pascal [Caucheteux] called up and asked: do you want to go to New York and do it? And then next minute I was in this crazy city with just 29 days to go. Joaquin and I talked a lot about things that were in the book that seemed cool but that felt gadgety outside of the book. I had to kill a few darlings.”

When Ramsay unveiled You Were Never Really There at Cannes, some seven months later, the film still didn’t have final credits attached.

Mind you, Cannes has always been welcoming to the Scottish director. Having studied photography at Edinburgh’s Napier College and cinematography at the National Film and Television School, she won the Prix de Jury in 1996 for her short graduation film, Smalls and Death, and again in 1998 for her third short, Gasman. Her debut feature film Ratcatcher premiered in Un Certain Regard (2000) winning Special Mention. We Need to Talk about Kevin was the only British film nominated for the Palme d’Or in official competition in 2011.

“I didn’t know I’d be a filmmaker,” says Ramsay. “I didn’t go to college with that idea. It was only after I started experimenting with cameras. I started off on the page. I liked drawing. I was a kid you could leave in the corner with a paper and a pencil for hours. I thought I’d go to art school. And that became still photography then the shorts. But my mum and dad were really into movies. They were of that generation that went to the pictures. I remember mum telling me about going to see Dorian Grey in a cinema out in the countryside and having to walk home because she didn’t have her bus fare. And how the film had frightened her. She loved Hitchcock and how he tells his stories very visually. I’d watch movies at film school and I’d realise: Oh. Douglas Sirk. I know this movie. Because I’d already have watched it with my mum.”