Time to tap the mute button

Alexander Skarsgard plays a dumbstruck Amish bartender making his way through a futuristic Berlin of neon, robots and awful acting 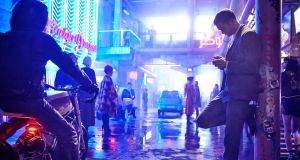 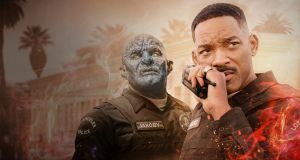 Joel Edgerton and Will Smith in ‘Bright’. Photograph: Netflix 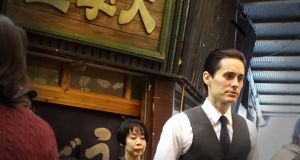 As the dust settles from awards season and we all curse ourselves for shelving that script for our very own sexy fishman fable, at least the internet’s biggest movie studio can toast its modicum of Oscars success. Netflix won Best Documentary with cyclist doping film Icarus and pulled a further four nominations for period drama Mudbound, not least Adapted Screenplay and Cinematography – the latter, astoundingly, the first ever nomination for a woman in that category.

It is perhaps surprising then that Netflix’s cinematic efforts have been decidedly mixed of late. Take Duncan Jones’ dystopian sci-fi noir, Mute. The film stars Alexander Skarsgard as the titular dumbstruck gentleman, an Amish bartender navigating his way through a futuristic Berlin filled with neon, robots and terrible acting. Just like all that previously mentioned merman erotica, Mute was long-gestating elsewhere, only for Netflix to take a punt and ended up with a film of few words, and fewer merits.

Far worse by all acounts is the Jared Leto-starring yakuza film The Outsider, which started streaming yesterday.

“Movies launching on Netflix is definitely the modern version of Straight to DVD,” opined @Rotmm in response to the platform’s policy of “rescuing” overlooked projects. “You may find some enjoyment, but quality is going to be in short supply.”

Nowhere was this Bargain Bin theory more widely circulated than with last month’s space-station schlocker The Cloverfield Paradox, a film scheduled for traditional cinematic release several times before being picked up by the streaming giant.

The film’s entire ad sell was a single $5 million Superbowl ad announcing the film would be premiered on the service immediately after the game, a marketing coup for stunt marketing that was, unfortunately for Netflix, more notable than the decidedly disappointing film itself. Tired and sloppy, it appears to be little more than the latest example of JJ Abrams’ bewildering campaign to slap the word Cloverfield on as many shelved projects as he can, so as to retroactively ruin its brand.

Oddly, Netflix’s biggest success in this period is another film which proved widely divisive (ie terrible); their leaden, fantasy-scented race relations allegory Bright, in which LA Cop Will Smith gets to know his new orc beat partner, in an alternative universe where humans, magical beings, and terrible movie contrivances, all co-exist in perfect harmony.

Repeatedly dragged by the chin-stroking press, the movie was nonetheless watched by 11 million people in three days, a sufficiently chirpy return that a sequel has already been commissioned. Whether it’s due to Will Smith’s starpower, their decision to back original material ahead of long-dead studio projects, or discovering some untapped public desire for Training Day But With Elves, one Netflix movie franchise may have a bright future yet.