The world's most powerful baboon has been tweeting about the Oscars

President Trump tweeted that the declining audience for the Oscars is due to the fact that we don't have stars. Except for himself

Donald Trump courted celebrity throughout his career and appeared in numerous films and tv shows throughout the 1980 and 90's. 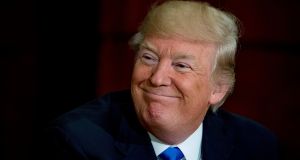 Donald Trump: Dressed up like a million-dollar trouper, is he the last of the megastars? Photograph: Andrew Harnik/AP

Oh God. What’s Trump done now? Has he thrown his dung at the zookeeper? Has he stuck a banana in his ear?

No, the world’s most powerful baboon has been tweeting about the Oscars. Continuing a decline that been underway for decades, the 2018 ceremony was the least watched ever. Maybe the time has come to render the Oscars in gifts. That ought to fix things.

“Lowest rated Oscars in HISTORY,” the Problem is, we don’t have Stars anymore – except your President (just kidding, of course)!” Trump tweeted.

We don’t have movie stars any more?

Have you not heard of Dylan O’Brien or Nathalie Emmanuel? Their latest film, Maze Runner: The Death Cure, is the third highest grossing of 2018. I suppose Angus Sampson, star of Insidious: The Last Key, in fifth place, is just some hopeless nonentity. Huh?

Look away if you don’t wish to trigger indigestion. But Donald Trump is correct. He isn’t really joking and he hasn’t really identified the “Problem” (let’s not get carried away). But we don’t have movie stars in the way we used to.

In the golden days of Hollywood, when the staff could still be treated as chattel, stars were invaluable assets who could flog a movie on name alone. Stick Gary Cooper or Jean Harlow in any old rubbish and the queues would snake around the block.

Lowest rated Oscars in HISTORY. Problem is, we don’t have Stars anymore - except your President (just kidding, of course)!

That lasted well into the modern era. Until relatively recently, Tom Cruise could make automatic fortunes for distributors of films bad enough to star Tom Cruise. It was enough to know that you would be bathed in light washing up from the teeth that gleamed so many metres below those of his stooped leading lady.

Daisy Ridley and John Boyega could probably buy a flagon of cider in Tesco without being molested. You wouldn’t say that of their former costar Harrison Ford

You weren’t paying to discover whether Tom’s racing car would travel faster than Cary Elwes’s. If Cary Elwes was going to win then Tom Cruise would be playing him too. You’re paying to be briefly elevated from the wretchedness of your existence by the Cruiser’s secular divinity (excuse the oxymoron). This was better than church. You don’t get nachos in church.

Sit yourself in front of the 2017 box office chart and ask yourself which of these films was driven by star power. Which made its money as a result of punters seeking out an actor they really liked? Not Star Wars: The Last Jedi. People get on all right with Daisy Ridley and John Boyega. But a latter-day Irving Berlin is never likely to celebrate either in rhyming couplets. “Dressed up like a million dollar trouper / Trying hard to look like Gary Cooper (super duper),” Berlin wrote in Puttin’ on the Ritz.

I’d say, if dressed informally, Ridley and Boyega could buy a flagon of cider in Tesco without being molested. You wouldn’t say that of their former costar Harrison Ford.

Some people may have gone to see Beauty and the Beast because of Emma Watson, but her fame derives not from any great breakthrough performance. She was – and will always be – a creation of the Harry Potter machine. JK Rowling’s universe was the star of that series, not any of the (let’s be kind) adequate actors in the three central roles.

Nobody knew who Tom Holland was before he appeared in Spider-Man: Homecoming. Guardians of the Galaxy stars that guy out of Parks and Recreation. Oh, you know. Nice guy. Something Pratt.

Trump is closer to being an old-fashioned supernova than are the likes of honest Frances McDormand, unpretentious Sam Rockwell or amiable Allison Janney

You have to work your way down to the number 22 spot in the 2017 chart to find a film that made its money largely on the appeal of its star. That’s The Mummy. Dear God, it’s Tom Cruse again. That awful film was seen as a flop, but Cruise had enough fans in Asia to nudge its figures towards respectability.

For the most part, however, it is the concept that sells the film. The stars that matter are those car-smashing enigmas whose appeal, existing apart from language, can open films in China and Indonesia. It is no coincidence that, if viewed from a distance with eyes scrunched up, The Rock can be easily mistaken for Vin Diesel. They are the men who matter.

At some point towards the end of the last century, long after the studio system broke down, movie stars shook off the preening and became a little bit more like human beings. The hollow mega-celebrities who attract undemanding worship now come from social media, YouTube and reality television.

Trump, a creation of that latter medium, really is closer to being an old-fashioned supernova than are the likes of honest Frances McDormand, unpretentious Sam Rockwell or amiable Allison Janney. There is a small number of people who, if listed as a presenter, could have restored Oscar ratings to their distant heights. Yes, one of them is currently president of the United States.