Review: Charlize Theron and Thandie Newton star in this decent stab at a cross-crossing crime caper 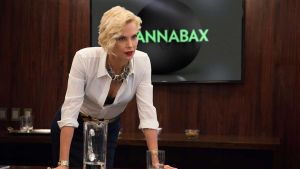 Charlize Theron in Gringo. She plays a self-preserving schemer whose idea of small talk is to gasp at a Mexican colleague’s family photographs: “Do they not sell condoms down here?”

The deluge of unlovely imitations that followed Quentin Tarantino’s earliest and best-loved films were a particular blight on 1990s cinema. That counts double for the brief, unprofitable wave of Elmore Leonard adaptations and approximations that arrived hot on the heels of Jackie Brown. Elmore Leonard is hard to do; faking Leonard is even worse.

Fair play to Nash Edgerton for this decent stab at a criss-crossing crime caper populated by comic grotesques.

At the centre of the film’s many complications is Harold (David Oyelowo, a convincing comic), a nice guy Nigerian immigrant with a spoiled wife (Thandie Newton) and not one, but two horrible bosses.

The director’s brother Joel is Richard Rusk, a high-flying suit in Big Pharma whose poor understanding of Darwinian theory is channelled into fouls at company basketball games and off-the-books corruption.

His partner in crime and occasional lover is Elaine (Charlize Theron), a self-preserving schemer whose idea of small talk is to gasp at a Mexican colleague’s family photographs: “Do they not sell condoms down here?”

Shenanigans ensue, in a plot that takes in a company-wide switch to medical marijuana, a Mexican cartel, and Harold staging his own kidnap. Various characters arrive and quickly exit the stage. Some, particularly Sharlto Copley’s conscious-pricked bounty hunter, are memorable. Others, particularly a blink-and-you’ll-miss-her, Amanda Seyfried, serve no narrative purpose whatsoever.

The screenplay by Matthew Stone (Intolerable Cruelty) and Anthony Tambakis (Warrior), occasionally fails to connect: the drug lord who pauses his business dealings to banter about The Beatles and a bizarre exchange about Judas and St Peter between Oyelowo and Copley prove unworthy of the moniker “sub-Tarantino”.

Still, a game and hugely likable cast keep Gringo afloat. It’s hard to begrudge them the fun they’re having on the screen. Nash Edgerton, a veteran stuntman who was Ewan McGregor’s body double in Star Wars: Attack of the Clones and Revenge of the Sith, keeps the silliness coming and the chaos negotiable. It’s grand, like.