This week brings us a riveting revenger, a forbidding Outback western, and Nicolas Cage at his unhinged loopiest

Official trailer for You Were Never Really Here. 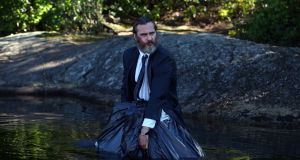 Vengeance is his: Joaquin Phoenix in You Were Never Really Here

Ramsay returns with a searing revenge drama set in a terrifying, heightened version of New York City. Joaquin Phoenix stars as a private operative who spends most of his time rescuing victims of sexual slavery. A US senator hires him to recover his daughter and punish those who put her through hell. The first death triggers a veritable cornucopia of butchery. It is a brash, noisy, violent picture, but it is also a subtle, intricate, thoughtful one. Review/Trailer DC

It is nine years since Thornton’s Samson and Delilah was awarded the Camera d’Or prize at Cannes. Happily, Sweet Country, the best Oz-based neo-western since John Hillcoat’s The Proposition, proves well worth the wait. The film concerns a 1920s-era manhunt for an aboriginal stockman (Morris) who has killed a vicious white veteran in self-defence. Thornton’s direction, cinematography and screenplay could not be more impactful or ochre. The ensemble cast are excellent. And the frontier has seldom looked so forbidding. TB

Woody Allen’s latest stars Winslet as a troubled woman, living with a second husband in Coney Island, who get tempted into a big sin after falling for a younger man (Timberlake). Wonder Wheel falls near the Allen median: some good performances, some bad ones, a few half-baked ideas, some memorable images. Vittorio Storaro’s photography is delicious. The performances are sound enough. But, like so much of Allen’s later work, it doesn’t feel quite finished. Review DC

Think back on the most unhinged screen moments of Nicolas Cage’s career. Multiply all these scenes together and you still can’t match the awesome lunacy of Nic killing a pool table in the delightfully delirious Mom and Dad. With a taboo-trouncing twist on James Tiptree Jr’s 1977 sci-fi classic The Screwfly Solution, this frazzled new film from reliably hyperactive Taylor (Crank: High Voltage) concerns a mysterious signal that starts transmitting through television screens and radios. The madness is all to enjoyable ends. TB

Two Ascendency twins, haunted by malign “Lodgers”, lurk in their big Irish house in the years following the first World War. Working from a script by David Turpin, the picture hangs around some fascinating ideas about otherness in Irish society, but there is a sense that too much tinkering has gone on with the machinery. A terrific founding concept leads on to a denouement that could only be more baffling if it were in Japanese. Review DC

Fascinating documentary on a movie star who, as well as being declared the most beautiful of her age, found time to invent a weapons guidance system that helped in the development of Bluetooth. Alexandra Dean’s picture talks us through these details with great lucidity. Bombshell suffers from some common complaints of modern documentary - too much music; unnecessary, if perfectly decent, animated sequences - but it does remind us of a class of personality that doesn’t exist anymore. A treat. Review/Trailer DC