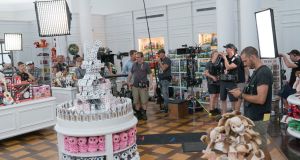 On the set of ‘Peter Rabbit’

If you go to see the new Peter Rabbit film (and there are reasons to do so) you will catch a three-second shot of Domhnall Gleeson running down Hans Crescent towards the Brompton Road in London SW1.

Everybody knows its takes bleeding forever to shoot a film, but it’s always fun to be reminded exactly what sucks up all that time. Gleeson’s sprint takes him along the Eastern flank of Harrods towards a main thoroughfare clogged with tourists. Over an hour and a half, we see three or four takes. On each occasion, the background talent has to be herded into position and talked into a state of ambient nothingness.

There’s time to take in the changing light. There’s time to give directions to meandering Texans. There’s time to notice a huddle of policeman at the southern end of the crescent. “That’s the Ecuadorian embassy,” my colleague James observes. He’s right. It is the Ecuadorian Embassy. If Julian Assange, holed up there since 2012, were to stick his head out the window he might get a glimpse of our Gleeson’s retreating body. But he probably wouldn’t. He would be more likely to see an assistant director doing a spot of herding.

All of this would have surprised Beatrix Potter. The English author, who died in 1943, was hugely protective of her sylvan universe. The perky Peter Rabbit, the industrious Mrs Tiggy-Winkle and the damp Jeremy Fisher have had only fleeting encounters with Big Entertainment. To her death,  Potter resisted all advances from Walt Disney himself.

As late as the 1970s, when your current correspondent was a child, the only big-screen adaptation was a worthy – if dull to our eyes and ears – version by the Royal Ballet. By that stage, A A Milne’s Winnie the Pooh had long been an employee of the Mouse House. For good or ill, Potter remained pure.

The odd TV movie has drawn on Potter’s original illustrations. In 2012, Dublin’s Brown Bag Films produced an animated series for CBeebies. But this is the first time Peter Rabbit has made into a theatrically released, studio picture (without ballet).

Here’s a thing. Walk about a mile and a half in the opposite direction to Julian Assange – through Hyde Park -- and you’ll find yourself at Paddington Station. The critical and commercial success of those films about a loveable Peruvian bear has drawn inevitable attention to Potter’s own anthropomorphic adventures.

Like those pictures, Peter Rabbit, directed by Will Gluck, creator of the fine Easy A, combines live action with high-end computer animation. The inconveniently ancient Mr McGregor, arch-enemy to Peter Rabbit, is killed off in the opening 10 minutes and replaced by the fresher, cooler, more Star Warsy Gleeson. Recently sacked from Harrods, this younger McGregor takes over his great Uncle’s house and, when not falling in love with Rose Byrne, carries on a war of attrition with the cheeky rabbit.

There has been low-level muttering from Potter enthusiasts throughout (one is reminded of the arteries burst during the making of the Hitchhikers Guide to the Galaxy movie). All this came to a head some months after my trip to Harrods when the first trailer emerged. The Daily Mail made characteristically coy use of inverted commas as it described Peter “wiggling his bottom in a provocative ‘twerking’ dance to a pounding disco beat”. Rowena Godfrey from the Beatrix Potter Society was quoted as saying: “The original book is such a marvellous story – this distortion of it is such a shame.” Well, we’ll see. Shall we?

We have gathered in the nearby Mandarin Oriental Hotel to throw softballs at executive producer Jodi Hildebrand. There is serious money involved. Peter Rabbit is produced by Sony Pictures in co-operation with Animal Logic, the Australian animation and effects studio that worked on Happy Feet and The Lego Movie. The picture is shot in the Lake District, London and Australia.

Why did this happen now?

“I don’t know,” Hildebrand says. “It was Animal Logic on the hunt for material that hadn’t quite been brought to life. I think there is something about the quality of animation we can do now that allows us to integrate these characters into the real world.”

Okay, I guess. But how were the rights secured? We’ve been led to believe they were closely held.

“Penguin now controls that and their entire brand team have been working with us super closely,” she says.

Hildebrand also addresses the issue that has most unnerved purists. I have avoided mentioning it to this point, but (look away, delicate readers) James Corden provides the voice of Peter Rabbit.

“He was someone who was fun and quick and mischievous and had that attitude,” Hildebrand says. “You also want somebody with that warmth. You can’t help but love him . . .”

I am sure I imagined the awkward shuffling of feet which  greeted that last sentence. Yes, I am absolutely certain I invented it.

Anyway, if we must have a young Mr McGregor, then there’s no man better than Domhnall Gleeson. Now as busy as any actor on the planet, Gleeson arrives into the Mandarin on a rush of positive energy. He spent the previous night with his pals Richard Curtis and Emma Freud. He gives the impression that none of this counts as a chore.

I notice that, unlike on previous times I’ve met him during productions, he is not speaking in the accent he uses on camera. How does that work? Does he only do when he’d actually between shots?

“It is about feeling the need,” he says. “But it can help with staying in a persona. My first day on Harry Potter I had never done the accent before and I went Australian. [Director] David Yates was like: ‘You know you’re doing full Australian?’”

Anyway, he seems to have mastered the English accent now. That’s just as well. Beatrix Potter is as vital a part of English culture as Shakespeare, Morrissey or bird spotting. Gleeson admits to knowing little about the books when the script – which he loves – slipped into his inbox.

“Peter Rabbit? What? I didn’t read Peter Rabbit growing up. Did you?”

He turns to me as the Irish representative at the table. I’m not sure. I think I had it read to me in the 12th century.

It wasn’t allowed in the house?

A serious European journalist then nearly says the wrong thing.

“It is an important part of British culture. No?”

There is every sense that we are being drawn into the most efficient of corporate machines. Harrods have allowed unusual access to the film-makers. Following chats and briefings, the party of journalists is led to the department store for a detailed tour and a lecture on its origins as a tea retailer in the middle years of the 19th century. The people behind Peter Rabbit have generated great expectations. The cast is strong. The effects are of the sharpest quality. The marketing will be aggressive.

Still, a year before release, as stiff April breezes ruffle the flags outside Harrods, it’s hard to connect with the glamorous comic fantasies to come. Gleeson is doing a mildly comic sprint. But nobody is laughing.

“It’s all to do with understanding what’s funny in a room and accepting that if it’s not funny then move on, he says. “But people aren’t allowed to laugh on a film set. Even if they do laugh it may be just something to do with you doing something different.”

He need not have worried. The film actually worked out pretty well. Assange will enjoy it when it arrives to video on demand.

Give us a wave, Julian.

Bestrix Potter on film and TV

TALES OF BEATRIX POTTER (1971)
Directed by experienced editor Reginald Mills, the adaptation of Frederick Ashton’s ballet was a hit for the British studio EMI films.

THE TAILOR OF GLOUCESTER (1989)
An attractive 45-minute adaptation of the much-loved tale featuring Ian Holm in the title role. A Christmas special by ITV.

THE TALE OF PETER RABBIT (1991)
A tolerable US-Canadian adaptation made for HBO. The always-welcome Carol Burnett narrates.

MISS POTTER (2006)
Very likable biopic starring Renée Zellweger as the author and Ewan McGregor as her suitor. There was also a decent BBC version from 1982 with Penelope Wilton as Potter.

PETER RABBIT (2012)
The animation operation based in Smithfield, Dublin, has quietly become one of the nation’s leading entertainment powerhouse. Their Potter series ran to 56 episodes for CBeebies and Nickelodeon.