Tarantino’s Once Upon a Time... in Hollywood: There’ll be fighting in the aisles

The official trailer for Once upon a Time in Hollywood, the 9th film by Quentin Tarantino. Video: Sony Pictures 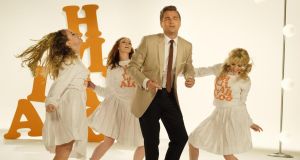 Once Upon a Time... in Hollywood: Quentin Tarantino’s new film, starring Leonardo DiCaprio, is a vast improvement on the exhausting The Hateful Eight

Here it is, 25 years to the day since Pulp Fiction

Once Upon a Time… in Hollywood
Directed by Quentin Tarantino. Starring Leonardo DiCaprio, Brad Pitt, Margot Robbie, Kurt Russell, Timothy Olyphant, Dakota Fanning, Luke Perry, Al Pacino. In competition
★★★★☆
And here it is. Even those not on board with Quentin Tarantino’s bubblegum postmodernism will admit the arrival of his latest joint is always an event. It feels like even more of a happening when that landing comes 25 years to the day after the premiere of Pulp Fiction at Cannes.

The new film is not the equal of that Palme d’Or winner. In recent years the director has gone in for a clutter that causes one to yearn for the discipline of Reservoir Dogs. But it is a vast improvement on the exhausting The Hateful Eight.

As almost everyone already knows, Tarantino’s ninth feature, set at the fag end of the 1960s, hangs around the relationship between Rick Dalton, a fading TV star pondering a new career in Italy, and his stunt double Cliff Booth. Leonardo DiCaprio, who really shouldn’t be in middle age yet, is ragged and shaky as Dalton. Pitt is wry and fatalistic as the mysterious Booth. Early on we realise that they live next door to the house in which the Manson Family cult will shortly murder the actor Sharon Tate and three friends.

That the film will be baggier than Bagpuss becomes clear in an opening scene that finds Al Pacino, amusing as Dalton’s agent, trying to edge him towards spaghetti westerns. At the mention of Dalton’s recent war film we see a lengthy scene from that film. At the mention of his popular TV series we see an unnecessary clip from that. Later we get enormous sections of the actor’s latest movie. Tarantino is in need of a producer to quell his excess, but it’s hard to imagine a restrained version of his current aesthetic. Excess is part of the appeal (for those appealed).

The soundtrack is as well curated as ever. The cars are enormous. The clothes are styled to within a nanometre of oblivion. What keep the film interesting are Tarantino’s infectious fascination with period detail and his gift for cinematic texture

The middle third of the film constitutes a leisurely wander through the canyons and bars of contemporaneous Los Angeles. Pitt feeds a dog that seems certain to win the Palm Dog at the end of the festival. He takes a trip to the Manson Family’s lair and asserts his authority. Meanwhile, Dalton shoots that interminable movie and sobs over the dying of his starry light.

The soundtrack is as well curated as ever. The cars are enormous. The clothes are styled to within a nanometre of oblivion. What keep the film interesting are Tarantino’s infectious fascination with period detail and his gift for cinematic texture. Once Upon a Time… in Hollywood looks shinier and flashier than a slice of contemporaneous pop art. For every longueur there is a scene that rivals his finest. A sequence between Dalton and a child actor has a tenderness that this director rarely allows. There are traces elsewhere of a new languor that sits well within a film offering an elegy for the era of Tarantino’s childhood.

The film was largely well received at its press screening – and got an enormous standing ovation at the red-carpet event – but there will certainly be dissenters. In an era when film-makers are thinking more deeply about violence against women, the casual, almost blase treatment of the Manson Family feels uncomfortable. The inclusion of a fictionalised version of Tate’s husband, Roman Polanski, later convicted of rape, also seems careless. Margot Robbie doesn’t have enough to do with a version of Tate that is more decorative than revelatory.

We can say nothing about the denouement bar that it will provoke fracas in the aisles. Tarantino is still with us.

Almodóvar and Sciamma ahead in Palme race

Here is your update on the race for the Palme d’Or. In a competition that has so far had few knock-it-out-of-the-park moments, we seem to be currently dealing with a two-horse race. The Screen Daily jury grid, which grades reviews out of four, still has Pedro Almodóvar’s Pain and Glory ahead at an average 3.3. But Céline Sciamma’s Portrait of a Lady on Fire has just crept up the inside rail to 3.1. The critic and programmer Neil Young, who sets (recreational) odds at Jigsaw Lounge, agrees with that assessment. Neil puts Pain and Glory favourite at 3/1. Portrait of a Lady on Fire is just behind, at 7/2.

We’re sorry about this, but the Oscar bloggers are already circling this year’s films in the hope of finding clues about the nominations in eight months’ time. Released this week, and very much populist fare, Dexter Fletcher’s Rocketman will need to score big at the box office to have any significant chance of headline nominations. Bohemian Rhapsody, last year’s big shocker, would never have clocked up those mentions without its spectacular haul. Robert Eggers’s The Lighthouse is a trickier one to call. No film this odd is likely to score a best-picture nomination, but Willem Dafoe is in a good position for a best-actor nomination – supporting or lead, depending on how they spin it – with Robert Pattinson also a possible contender (in the category that Dafoe leaves free). Antonio Banderas could score a best-actor nomination for Pain and Glory. And then there’s Once Upon a Time… in Hollywood. Initial reviews have been better than expected. And Tarantino usually scores big with the Academy of Motion Picture Arts and Sciences. Remember that even the indifferently received The Hateful Eight scored three nominations and one win (for Ennio Morricone).

Nothing is buzzier than The Lighthouse

There has been buzz around this and buzz around that. The queues for Once Upon a Time… in Hollywood were predictably enormous, but that is to be predicted for a huge film in the main competition. No ticket this year has been hotter than The Lighthouse. That is partly because of the film’s high-profile talent and initial rave reviews, but the fact the film played in Directors’ Fortnight is also a factor. Those films screen in smaller venues, and all sectors at Cannes – press, buyers, exhibitors – must compete for a seat. This writer arrived two hours and 20 minutes before the second screening and, after priority-ticket holders were admitted, only just got into the Théâtre Croisette. Hundreds were turned away. This has led to much debate about why the film wasn’t in the main competition. It may have been turned down. Such eccentricities have occurred before. Perhaps Eggers or his team preferred the funkier Directors’ Fortnight strand, which has given us Mean Streets, THX 1138 and Jeanne Dielman, 23, quai du Commerce, 1080 Bruxelles. We will never know.

And today’s other review...

How is this film not more French? It’s got Isabelle Huppert in it and everything. A particular school of polite, middlebrow French drama plays well in prestige cinema to easily scared viewers. Often some senior actor – Isabelle Huppert, say – gathers other stars around for a holiday in an exotic location where cheese is eaten and scores are settled. The music is tasteful. The production design is easy on the eye.

Frankie is, in fact, partly French. Directed by Ira Sachs, the talented brain behind Love Is Strange and Little Men, the coproduction casts Huppert as an actor declining in Portugal with husband (Brendan Gleeson), son (Jérémie Renier), pal (Marisa Tomei), ex (Pascal Greggory) and others. Huppert has a movie-movie terminal disease that gives her the odd headache and causes her to collapse theatrically into the undergrowth. Brendan can’t face life without her. Jérémie is still angry with her. Marisa suspects that Isabelle has a plan to fix her up with Jérémie. And so on in high-end-soap style.

Frankie is a hard film to properly hate (although some have managed that here). It features an unending list of good actors, and all do their best with the featherweight dialogue. Gleeson is particularly touching as a man who can’t accept the inevitable course of cruel fate.

But there is no depth to the characters and no edge to the conversation. Every scene is cosy, deadened and directionless. It all ends with a lengthy shot from a great distance – I’m calling Abbas Kiarostami as the influence – that flogs an utterly bogus motivation for Huppert’s actions. Not buying it.