Cannes 2019: Irish movie Vivarium gets thumbs up from critics 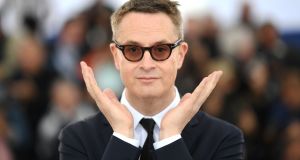 Danish director Nicolas Winding Refn poses during a photocall for the film Too Old To Die Young - North of Hollywood, West of Hell at the 72nd in Cannes. Photograph: Loic Venance/AFP/Getty Images

Film Fund Luxembourg and Screen Ireland have announced a new co-development fund for female film-makers. The formalisation of the initiative was celebrated with the presentation of the “Order of the Oak Crown” by Luxembourg’s prime minister Xavier Bettel to James Hickey, outgoing chief executive officer of Screen Ireland.

The fund, which will focus on the crucial development phase,aims to encourage a range of new features directed by and written by women. There is also a wider ambition to reduce gender disparity in the film industry. James Hickey commented: “This new development partnership with Luxembourg is part of a wide range of programmes that reflect our commitment to addressing the issue of gender inequality in Irish film-making and screen content, in particular the roles of writers and directors. Luxembourg is a long term co-production partner of Ireland and we are very excited to be launching a new co-development fund with them.”

This fund will contribute €40,000 per project. Projects must have producers attached from Ireland and Luxembourg. The announcement came as Screen Ireland threw its annual reception by the lapping Mediterranean. This will be the last such event with Mr Hickey at the helm. Désirée Finnegan takes over the role in August.

Vivarium picks up good notices from the trades

The initial reviews of Lorcan Finnegan’s Vivarium, the first Irish film to premiere at Critics Week in 52 years, have been positive. Writing in Screen International, Tim Grierson comments: “The audience can quickly surmise which societal conventions are being satirised, but the preciseness of Finnegan’s pacing — and the uncertainty concerning what is going on — keeps the viewer in suspense. Just as important, Vivarium evolves over its short running time, springing surprises and revealing new layers to its commentary.”

Over at the Hollywood Reporter, Stephen Dalton was similarly enthusiastic. “Vivarium remains a nerve-jangling, finely crafted thriller, he writes. “More dark fairy tale than straight sci-fi puzzle, it never reveals all its secrets but still concludes on a satisfying note of symmetry. On the craft side, major credit is due to production designer Philip Murphy for creating such a striking suburban hellscape, as well as composer and sound designer Kristian Eidnes Andersen for maximizing the sonic unease.” Jesse Eisenberg, who stars alongside Imogen Poots, was among those soaking up the applause at the first screening on Saturday morning.

Refn is okay with streaming

Nicholas Winding Refn, the Danish director of Drive and Only God Forgives, is in Cannes with the first episodes of his new TV series Too Old to Die Young. Netflix makes its only appearance this year in Directors’ Fortnight, but the Amazon-produced series has been snuck into the official selection. Refn, as is his way, waded into the streaming controversy and took no prisoners.

“This is a 13-hour movie, and it’s streaming,” he said. “This is the future.” You could almost hear the burghers of Cannes quivering in their celluloid boots. “Streaming is an ocean of possibilities,” he continued. “It’s so interesting to just come to work every day and just paint, until I ran out of money. I think the studios are ultimately getting ready for streaming, that’s common knowledge. The difference between streaming and more traditional theatrical is that streaming is an energy flow around us that runs 24 hours a day and seven days a week, and we can tap into and consume it whenever we want. That is a whole new ideology for how to exist.”

Maybe we should just pack up our stuff, go home and watch telly then.

Pain and Gain takes the lead

More on the fight for the Palme d’Or. Pedro Almodóvar’s Pain and Glory has surged into the lead on the Screen International critics grid. The chart which tabulates reviews, scored out of four (with zero as an option), has the Spanish director’s film way ahead with 3.4. Mati Diop’s Atlantics is a good bit behind on 2.8. The rest of the field is close behind. We noted a few days ago that tipster Neil Young of Jigsaw Lounge has Pain and Glory as ante-post favourite. Looks like good oddsmaking.

It is vulgar to begin a Cannes review with an awards tip, but Antonio Banderas stakes his claim to the best actor prize in this touching, beautifully judged meditation by his old pal Pedro Almodóvar. More than a few directors have risked this sort of self-reflexive project. Federico Fellini did it best in 8 1/2. Woody Allen nodded to that film in Stardust Memories.

One incarnation of Almodóvar owes a great deal to Fellini, but this project shows him at his calmest and most reflective. There are plenty of amusing interludes. Anybody who’s ever attended a post-film Q and A will enjoy the scene in which a director and his star field question over the phone while chasing the dragon at home. Pain and Glory is, however, mostly in a minor key.

Convincingly grey and weary, Banderas plays an ageing — though still super-gorgeous — director who, as an early, lovely animation explains, is currently suffering from every nagging pain known to medicine. An unwise remedy announces itself when he reconciles with an estranged actor pal (Asier Etxeandia) to facilitate the revival of their greatest collaboration. That’s where the heroin comes from.

That story is intercut with scenes of his impoverished youth featuring Penélope Cruz as his beloved mum.

Every element of the film is beautifully judged. Alberto Iglesias music is lovelier than ever.  José Luis Alcaine camera brings out the rustic beauty of the director’s childhood and the bold colours of contemporary hipster Madrid. But it is Banderas who makes the film fly. He has, like many good-looking actors and actresses, sometimes been underrated, but his performance here swells with vulnerability and regret. Give him a gong, Cannes.

Diao Yinan’s follow up to the excellent Black Coal Thin Ice, which won top prize at Berlin five years ago, has an implicit question running through it: can a film get by on stunning set-pieces alone? Just about. Maybe. It would, however, be nice if the superstructure here was a little more secure.

We begin in high noir territory with a bashed-up hoodlum meeting a mysterious woman in the penumbra of a neon light. The man is He is Zhou Zenong (Hu Ge) and, as we soon learn, he is on the run from former colleagues and the busy police. The woman is Liu Aiai (Gwei Lun-mei) and her purpose is initially obscure, but she looks to be either rescuing the protagonist or leading him to slaughter.

We get some further explanation with a flashback to events from just two days ago. It’s a busy tale that involves a dispute between two gangs, a competition to steal the most motorbikes and sudden, semi-comic decapitation. To say more would be to pretend that there is more order to the story than turns out to be the case.

This yarn is all over the place. Happily it is studded with brilliant action sequences, atmospheric cinematography and scenes of such wilful oddness that they alone justify entry. Murder by umbrella is wonderfully gory. The sight of massed pursuing motorbiked at night is singularly unsettling. The female characters simmer like Stanwyck.

Shame it’s such a mess.