Cannes diary: Polanski’s latest film screens in secret; plus reviews of Portrait of a Lady on Fire and Young Ahmed 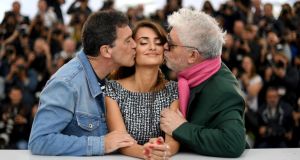 Antonio Banderas looks old, but gorgeous, in Pedro Almodóvar’s Pain and Glory, which also stars Penélope Cruz. Playing a version of the director, he convincingly winces at back pain and furrows at the poignancy of ageing.

The veteran admits that he had to annihilate a version of himself to play the role. “To create this character I had to kill Antonio Banderas. There was something in me that I could definitely not use for this role,” he said.

“I did experience a love that was aborted, that was broken. When you have to separate from someone you still love you have to set yourself free as if you were cutting off your arm. I have not had the reconciliation you see in the film.”

Roman Polanski could not be properly described as persona non grata in Cannes. After all, it’s only two years since his Based on a True Story played out of competition. But the #MeToo movement has since intervened, and his presence is not as welcome as it once was. Apparent evidence comes with the news that his latest film was screened in secret for buyers at this year’s event.

An Officer and a Spy, an adaptation of the novel by Robert Harris, focuses on the notorious anti-Semitic hounding of Alfred Dreyfus, a soldier wrongly accused of spying, in France in the late 19th century. Good luck with that. “It’s just not possible to release that film in the US right now,” a nameless American executive told the Hollywood Reporter. Another European distributor suggested he would have no problem releasing the film. Make of that what you will.

Ahead of the premiere of Quentin Tarantino’s Once Upon a Time… in Hollywood, we regret to tell you that the director has now got fully on board with spoiler paranoia. The film’s dedicated Twitter account carries a message from Tarantino outlining his feelings on the matter.

“I love Cinema. You love Cinema. It’s the journey of discovering a story for the first time,” it reads. “I’m thrilled to be here in Cannes to share Once Upon a Time… in Hollywood with the festival audience. The cast and crew have worked hard to create something original, and I only ask that everyone avoids revealing anything that would prevent later audiences from experiencing the film in the same way.”

Hmm. Are you thinking what I’m thinking? Incidentally, it now seems clear that there is an ellipsis in the title. (That’s what you call those three dots.) We hope those in punctuation fandom don’t regard this as a spoiler.

Maradona is a no-show

Every now and then the gossip in Cannes is about somebody who’s not here. When the official selection was announced there was much speculation that Diego Maradona, the subject of Asif Kapadia’s new documentary, would be here to stir controversy and otherwise cause trouble. Sadly, the footballer was detained with a shoulder injury.

Speaking at the UK Pavilion, Kapadia, director of acclaimed docs on Ayrton Senna and Amy Winehouse, outlined one reason for focusing on the Argentinean. He said: “Both those documentaries were about great people who died young. I did not want to repeat myself. That is why it felt right to do a film on a man who is still living and growing old.”

He also admitted that Maradona was not always to be believed. “This film was a new challenge,” Kapadia said. “Diego wasn’t the most reliable witness. His version of events was often exactly the opposite of what is on record. But he is obviously a very charismatic person and a great storyteller.”

Notions of obsession and sublimation are explored in a film that, for much of its duration, is almost too restrained in its telling. It eventually (ahem) catches fire, but much dry kindling is prepared before that happens.

Céline Sciamma, director of Tomboy and Girlhood, has come up with an ingenious vehicle for her themes. In the Brittany of the 18th century, Marianne (Noémie Merlant) is apparently sent as lady’s companion to the elusive, icy Héloïse (Adèle Haenel). A plot is being hatched. Marianne is a painter, and she has been asked to surreptitiously study the aloof young woman for a portrait. Héloïse has previously refused to sit, and a painting with an incomplete face sits as evidence of her eccentricity.

You couldn’t exactly say that Marianne and Héloïse hit it off – nobody in this environment would do anything so vulgar – but they make a connection, and the painter soon has a line on her portrait. As events progress, the relationship threatens to turn romantic.

The very coolness of the opening hour – taking place in a scrubbed past that suggests Jane Campion’s Bright Star – puts the eventual cinematic flourish into useful relief. The women engage in a musical moment on a beach that sits in the same place as the celebrated Rihanna dance in Girlhood. The inspiration for the film’s title comes in a flash that portends all kinds of catastrophe.

The emotional pay-off is so significant that the film takes on the quality of a courtship ritual. It’s an impressive, odd, eerie piece that could (just could) make Sciamma only the second woman director to land a Palme d’Or.

The Dardenne brothers, vying for a record third Palme d’Or, stray on to controversial territory in the opening of this often gripping, sometimes silly realist drama. The picture concerns a young boy named Ahmed (Idir Ben Addi) who, radicalised by a local imam, attacks his teacher for the crime of teaching modern Arabic over the strain found in the Koran. He is sent to a detention centre where decent people try to nudge him back to reason.

The set-up is rigorous and disturbing. We learn that a cousin has run off to become a jihadi fighter and that the boy has become estranged from his mother because she enjoys a glass of wine. The Dardennes don’t seek to blame social deprivation – the family is modestly comfortable – or even the deadly internet. This could be incendiary stuff in the current fetid climate.

Unfortunately, the tension withers and plausibility waxes as Ahmed is sent to a farm in the country. His brief, potentially transformative romance with a local girls is too sentimental to pass muster in a film aiming at hard-nosed realism, and the impassivity of the title character, though justified by his embrace of cult psychology, deters any chance of empathy, understanding or engagement. He comes across an automaton programmed by uncaring maniacs.

As ever with these directors, the camera potters after actors who spend a long time getting to where they are going. The texture of life is convincing. The film-makers’ humanism is never in doubt.

Like The Unknown Girl, their previous Cannes entry, Young Ahmed feels as if it hasn’t quite escaped the workshop stage. Something raw and dangerous is detectable in the mist. But it’s not quite here yet.

So what is the meaning of Lowery’s existential fable ‘A Ghost Story’?
5

Catherine Keener: ‘I did not know about Harvey Weinstein at all’
6

From New Zealand to Saudi Arabia: When women won the vote worldwide
8