Cannes diary: Robert Pattinson stars in The Lighthouse; and a crowded market for mutts 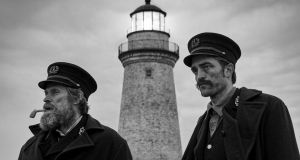 Our first five-star review from Cannes 2019

The Lighthouse
★★★★★
Directed by Robert Eggers. Starring Robert Pattinson, Willem Dafoe, Valeriia Karaman. Directors’ Fortnight
There was an irony to be read in the fact that, at a moment of damp hysteria, the digital projection of Robert Eggers’s extraordinary film broke down in a sparkly hiss. In the few minutes it took to get the film restarted, the audience could contemplate how, after shooting on 35mm monochrome stock with vintage cameras, the film-makers were almost undone by 21st century technology.

The sharp, etched-out beauty of the images is one reason to celebrate the director’s follow-up to The Witch. Then there are the complementary performances by Willem Dafoe and Robert Pattinson: the first a bitter ancient fired by Old Testament baloney, the second a suspicious outsider with a guilty secret. There is also the fact that it is surely the only film to combine the aesthetics of Captain Birdseye and Béla Tarr’s The Turin Horse.

Dafoe is an ancient lighthouse keeper named Tom Wake. Pattinson (once again confirming his impeccable taste in scripts and directors) plays the lean, unimpressed Ephraim Winslow, employed as Tom’s factotum for a four-week stretch. From the beginning we are made aware of the hierarchies. Tom is not just Ephraim’s professional superior; he also sees himself as a sage on all matters relating to sea and human affairs. As the days progress they bicker over meals in the confined living space. Ephraim completes Sisyphean tasks as buckets of rain and sleet are hurled in his resentful face.

The Lighthouse ploughs through centuries of lore for briny manifestations of madness. All are cleverly imagined. Many are properly unsettling

The lamp itself has power. Tom’s demand that only he go near it is partly to do with seniority, but there’s also a sense that he suspects it of having supernatural powers. Meanwhile, a seabird tempts Tom to defy one of the great maritime superstitions.

Shot in a suitably claustrophobic narrow ratio, the film is clearly taking us towards an outbreak of cabin fever on a grand scale. That begins early on and escalates into a hectic collision of myth and fury that surpasses even The Witch for antic extravagance. The picture ploughs through centuries of lore for briny manifestations of madness. All are cleverly imagined. Many are properly unsettling.

None of this would matter if the central relationship didn’t work. Dafoe and Pattinson play off each other delightfully to create a closed-in conflict that Samuel Beckett would have savoured. Easily the best film this writer has seen at Cannes to this point.

Robert Pattinson, at just 33, is already a part of the Cannes superstructure. He’s been here with Cosmopolis, The Rover, Maps to the Stars, Good Time and, of course – hottest ticket of the weekend – The Lighthouse, at Directors’ Fortnight.

Like Kirsten Stewart, who had two films here in 2016, Pattinson has used his Twilight fame to help odd and challenging programmes into production. The news that he may be about to play Batman has clogged up the fan sites, but it is his commitment to independent cinema that matters here.

He also seems to be a good egg. Pattinson was among the celebrities who turned out at the Nikki Beach party, presented by the Hollywood Foreign Press Association. Pattinson and Helen Mirren cohosted an event that raised $500,000 for Help Refugees. Meher Tatna, the association’s president, said its annual Cannes event “has become a platform for us to raise awareness of humanitarian organisations that are working to make our world a better place”.

Still on a high after the screening of Vivarium, Fantastic Films, its Irish production company, has signed up as coproducer of Dan Pringle’s upcoming A Patriot. It was announced in Cannes that Charles Dance will be joining Eva Green and Helen Hunt for an August shoot in Dublin. Brendan McCarthy and John McDonnell, who were on the Croisette for the Vivarium premiere, will again be on producer duties. Set in some version of the future, the film concerns a government official compromised by a startling discovery.

The controversial presentation of Alain Delon, who has admitted to hitting women, with an honorary Palme d’Or did not go ahead without protest. Sand Van Roy, the actor who claimed the director Luc Besson raped her – French authorities said in February that, after a series of police investigations, he would not face charges – walked the red carpet with a temporary tattoo on her back that placed the words “Stop Violence Against Women” beside the #MeToo logo. She is the Iceland of Cannes. (That was a Eurovision reference.)

Serious worries are afoot that not enough contenders are announcing themselves for this year’s Palm Dog. We are only a little over halfway through this year’s Cannes film festival, but the only serous candidate at this stage seems to be Kerry Fox’s unfortunate mutt Bello in Jessica Hausner’s Little Joe. That dog plays a crucial role in the raising of suspicions about dangerous genetically modified flora and gets to do some cute ball-chasing work. Him aside, the field is looking bare. There is an impressive (and symbolic) three-legged dog in Ken Loach’s Sorry We Missed You, but if you blink you might miss him or her.

Toby Rose, who founded the event in 2001, was philosophical about the slow start. “As ever, dogs do their best, but maybe weren’t offered as many key spotlight positions as last year,” he told the Hollywood Reporter. “Dogs have taken it on the chin for diversity and have found themselves in a more crowded market than usual.” The Palm Dog is presented at the UK Pavilion (where else?) on Friday afternoon.

And today’s other review

In the first episode of the most recent series of Veep, Amy, the political staffer played by Anna Chlumsky, is supervising a rally for the title character when she spots someone leaving early. “Hey, you can’t just walk out,” she says. “It’s not a Terrence Malick movie.”

You could call A Hidden Life a return to form (just). Anchoring himself to a true story – that of Franz Jägerstätter, an Austrian conscious objector during the second World War – Malick has no scope to wander into the dreary actress-spinning of Knight of Cups or Song to Song. There is a story. That story is told.

For the first hour it really does look as if the Malick, who won the Palme d’Or here with A Tree of Life, in 2011, is back. Jörg Widmer’s ravishing cinematography makes the best of alps, waterfalls and sheep as Franz (August Diehl) tends to his elevated farm. No film has started so beautifully in this location since The Sound of Music. James Newton Howard’s original score is lovely enough to blare in the same company as the classical music that shares equal time on the soundtrack.

Nobody could sit through A Hidden Life without being swept up by the audiovisual storm. But the coolness of Malick’s  approach is ultimately distancing, at times even alienating

Franz serves an initial period with forces but is demobbed after the fall of France. The trouble starts when he is again called up and is asked to take an oath of allegiance to the Nazi regime. Supported by his hard-working wife, he refuses and is propelled on the road to martyrdom.

That is really all there is to the plot. Yet the film stretches over an ultimately exhausting 173 minutes. You know how this works with Malick. Verses from scripture are intoned while bits of Saint Matthew Passion swell. The characters speak their inner thoughts while Arvo Pärt surges. Weirdly, heated and hateful dialogue is delivered in German and everything else is rendered in English. The opening act has the virtue of some gentle momentum, but, after Franz is arrested, the picture slows to the pace of an Alpine glacier.

We end up with something that feels like an excerpt from Terrence Malick’s Lives of the Saints. And so it nearly transpires. Jägerstätter was beatified by the Catholic Church and has become the subject of holy icons (other than this one).

Nobody could sit through A Hidden Life without being swept up by the audiovisual storm that arrives with Malick being himself. But the coolness of his approach is ultimately distancing, at times even alienating. Malick gestures towards emotions without making you feel them.

Still, this is not the sort of film of which sitcom gags are made. You’ll stay for a final, brief performance by the recently late Bruno Ganz.