Cannes 2019: Where the rich shell out for big ticket events 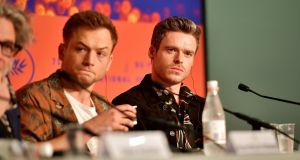 It seems as if rich idiots are still throwing money at anyone with access to the big ticket events at Cannes. The good people at Screen International have dug up an apparent price list for access to the tastiest events of the festival. A ticket for the premiere and after party of Rocketman will set you back an alleged $7,500.

But it seems that Tarantino (or maybe Brad Pitt) outranks Elton John in this world. Entry to the premiere and party for that director’s Once Upon a Time in Hollywood is set at $9,500 by the men in trilbies (if that’s what touts still wear). The AMFAR charity dinner party with Tarantino and DiCaprio tops the charts with a $13,500 price tag. You wouldn’t want to get food poisoning.

The Cannes authorities are, however, not convinced the offers are genuine. “It is highly possible this is a scam without any real tickets at the end of the line,” a spokesperson said. “In previous cases, we have also been able to prosecute, and guilty parties were condemned.” Condemned? Do they still do that?

Change is still slow in the drive for gender equality

It is one year since 82 women professionals marched to the steps of the Palais to protest the continuing gender imbalance as regards directors in the official selection. Just four films by women compete for the Palme d’Or this year. Sales agents Delphyne Besse, one of the instigators of the protest, has been speaking about what has changed and what hasn’t.

“We wanted to do something really striking, to get attention,” Besse explains. “With Cate Blanchett being the president of the jury, it all fell into place.” Immediately after the protest, Collectif 50/50 set up a charter urging for equality that was publicly signed by Cannes director Thierry Frémaux. A few smaller battles were then won. For instance, Cannes announced the details of its selection committee — hitherto a dark secret.

“It is important to us there is transparency around selection committees,” Besse explains. “We all had an idea by hearsay who was on the committee but this was the first time Cannes announced it publicly.” This debate will continue.

Raining its arse off at #Cannes2019 pic.twitter.com/sUAVQ0WzYa

Can Ken score the treble?

The rave reviews for Ken Loach’s Sorry We Missed You — at least as positive as those for I, Daniel Blake in 2016 — have set Cannes veterans speculating about the possible shattering of a stubbornly resilient record. Eight sets of film-makers have won the top award twice. We use that odd construction as the Dardenne brothers take up one spot on the list.

The others are Alf Sjöberg (dead) Francis Ford Coppola (quiet), Bille August (no longer at the top of his game), Emir Kusturica (also quiet), Shohei Imamura (dead) and Michael Haneke (still very much a player).

Loach won for The Wind that Shakes the Barley and I,Daniel Blake and, at this early stage, looks in a strong position to complete the hat trick. He would also become the only director other than Haneke to win for successive films. But there’s looming competition. The Dardennes’ The Young Ahmed premieres here in a few days.

Taron is choked up by the Rocketman response

Taron Egerton, who bosses Rocketman with his turn as Elton John, admits to being a slave to emotion. During the press conference for that out-of-competition smash, he was asked about the images of him crying during the standing ovation for Sir Elton. “Alright, alright. Let’s stop talking about it,” he said chortling. “I got a bit emotional. It was one of the best days of my life.” The film, which opens worldwide next week, drew ovations at even press screenings. “The response has been so wonderful,” Egerton continued. “For me, personally, thank you so much to everyone that said nice things. You’ve made a young man from Aberystwyth incredibly happy. You’ve made a 72-year-old rock star even more happy. So thank you very much.” Talk is already turning to its Oscar potential. If it scores at the box office then it looks certain to be contender.

And the day’s reviews from the 2019 festival…

In films such as Amour Fou and Lourdes, Jessica Hausner has shown herself to be possessed of a fierce intelligence that tends towards the playful. That intellect is exercised to bursting in a science-fiction, bio-tech puzzler that will irritate as many as it delights. Even those resistant to the leisurely pacing will surely accept that the things looks absolutely gorgeous. Dig deeper and Little Joe will give you sleepless nights. The picture concerns the development of a genetically engineered plant — the Little Joe of the title — that will, it is hoped, soothe those nearby with its blissful odour. Alice Woodard (Emily Beecham) is the scientist most responsible for its development. Chris (Ben Whishaw), a softly spoken nerd, and Bella (Kerry Fox), an older researcher with mental health issues, are also there to coax the brightly coloured flora into existence. Our own David Wilmot is hilarious as a boss who just wants an easy life. We soon suspect that the plant is up to no good. Its pollen is spreading a sort of creepy torpor.

Those infected are overcome with an unsatisfactory school of ersatz happiness that leads them to care little for connection. At one level, the whole film is a metaphorical consideration of antidepressants. Does it matter if happiness is only manufactured? The film offers no answer, but it does engineer a wonderfully creepy depiction of what an infestation of bio-chemical contentment might look like. It does this with the aid of stunning costumes — pistachio lab coats and complicated, beige shirts — that clash and complement the most deliciously clean production design imaginable. Martin Gschlacht’s camera pans slowly to exclude vital bits of the action. The score by Teiji Ito is a masterpiece of clattering unease. Many will find Little Joe a bit slow and elliptical, but it gets under your skin and lays eggs there. A standout oddity.

Before Lorcan Finnegan’s properly creepy science-fiction horror kicked off, the man from Critics Week (Vivarium is the first Irish film to land here in 51 years) perhaps unwisely compared it to an episode of Dark Mirror. Don’t be handing the critics ammunition, dude. There is something in that comparison, but Finnegan’s follow up to Without Name comfortably justifies its feature length. The premise is set up economically and then followed up by elegant variations on the way to a satisfactory close. Jesse Eisenberg and Imogen Poots play a couple who, bravely jumping on the property ladder, arrange to visit an estate some distance from an unnamed city. We are, perhaps, in the same Irish-tinged Nowhere that accommodated The Lobster. A few characters have Irish accents. A car has Kilkenny plates. But this is a nether region where anything can happen. The couple find they are unable to leave the bland, suffocatingly homogenous estate. Every turn brings them back to their starting point. Then a baby arrives in a box. Within days he has grown into a bland monster who constantly imitates his parents and screams cacophonously when inconvenienced. The film’s title and early shots of a cuckoo lay out the conceit reasonably clearly, but Finnegan and co-writer Garret Shanley work hard to thicken the ickiness throughout. Early suggestions of satire — it’s definitely not a film about the housing crisis — slip away as a school of pitch-black, absurdist humour takes over. Eisenberg does good background music, but the picture belongs to Poots and her savagely expressed disgust. Her repeated delivery of the line “I am not your f**king mother!” along justifies an award.