The Unknown Girl review: a worthwhile addition to the Dardennes canon

Recut after its first showing at Cannes, the Dardenne brothers’ latest is a low-key whodunnit with a moral sting in the tail 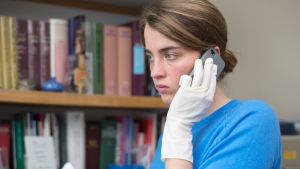 You have to hand it to the Dardenne Brothers. Few directors of their status would be humble enough to accept criticism of a film on premiere and recut it for release. That was what happened following the Cannes screened of The Unknown Girl and, following some careful trimming, we are left with a sharper, more coherent drama.

Adèle Haenel is oddly deadened as Jenny Davin, a caring doctor working on the outskirts of Liège. As we join her, she is engaged in a war of wills with her inexplicably surly intern, Julien (Olivier Bonnaud). While they are scowling at one another, the buzzer goes and, thus distracted, they fail to answer the door.

It transpires that a young African woman was seeking sanctuary. The next day she is found dead and, stricken by guilt, Jenny sets out to identify her. The film becomes a sort of low-key, naturalistic detective story. It seems that the girl might have been a sex worker and might have a connection with one of Jenny’s patients.

Haenel’s performance – a weird, sustained sulk, delivered at a reclining angle – is presumably aiming for the flatness of reality. If that was the intention, she and the directors have pushed the effect too far. The harder she searches, the more uninterested she seems. Jenny is the good doctor who can heal both body and soul with her endless sincerity. Jessica Fletcher had more angles to her personality in (the not wholly dissimilar) Murder, She Wrote.

Still, the re-edit has left us with a story worth following and an argument worth taking on board. There is much here about the way the business of life distracts us from the impulse to be humane. If The Unknown Girl had a young film-maker’s name attached to it, we would be heralding his or her potential. Indeed, we’d probably be called that director the new Dardennes.