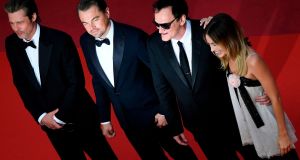 Brad Pitt, Leonardo DiCaprio, film director Quentin Tarantino and Margot Robbie arrive for the screening of Once Upon a Time... in Hollywood at the 72nd Cannes Film Festival in Cannes, southern France. Photograph: Christophe Simon/AFP/Getty Images

Quentin Tarantino came close to losing the critics before Once Upon a Time… In Hollywood even began. As the audiences was settling in, a Cannes official came out and read a statement from the director asking journalists not to give away any spoilers. The loud catcalls (loudest when the statement was being read in French, interestingly) suggested that the reviewers didn’t like being told their business.

There’s really not much to give away in the first two hours of 159 sometimes taxing, often exhilarating minutes. As everyone already knows, Tarantino’s ninth feature, set at the fag end of the 1960s, hangs around the relationship between Rick Dalton, a fading TV star pondering a new career in Italy, and his stunt double Cliff Booth.

Leonardo DiCaprio is ragged and shaky as Dalton. Brad Pitt is wry and fatalistic as the mysterious Booth. Early on we realise that they live next door to the house in which the Manson Family will shortly murder Sharon Tate and three friends.

That the film will be baggier than Bagpuss becomes clear in an opening scene that finds Al Pacino, amusing as Dalton’s agent, trying to edge him towards spaghetti westerns. At the mention of a recent Dalton war film, we see a lengthy scene from that film. At the mention of his popular TV series, we see an unnecessary clip from that. Later we get enormous sections of the actor’s latest movie. Tarantino is in need of a producer to quell his excess, but it’s hard to imagine a restrained version of his current aesthetic. Excess is part of the appeal.

After that, the film settles into a groove that finds Booth rubbing up against the Manson Family while Dalton struggles to reignite his career. Scenes often lead in no sensible direction. Booth has an amusing fight with a young Bruce Lee. Sharon Tate, played exhilaratingly by Margot Robbie, attends her latest film in a local movie theatre and laughs along at her own pratfalls.

What keeps the film interesting is Tarantino’s infectious fascination with period detail and his gift for cinematic texture. It looks shinier and flashier than a slice of contemporaneous pop art. For every longeur, there is a scene that rivals his very finest. A sequence between Dalton and a child actor has a tenderness that this director rarely allows.

Once Upon a Time… In Hollywood, which hit Cannes 25 years to the day Pulp Fiction premiered at the festival,  received its inevitable standing ovation at the Lumiere Theatre (you worry if you don’t get the crowd on their feet) and has picked up largely good word from tweeting critics.

Peter Bradshaw of the Guardian wrote: “Quentin Tarantino’s brilliant exploitation black-comedy Once Upon A Time In Hollywood finds a pulp-fictionally redemptive take on the Manson nightmare: shocking, gripping, dazzlingly shot in the celluloid-primary colours of sky blue and sunset gold.”

There will, however, be dissenters. In the #MeToo era, it seems careless to include a brief, fictionalised version of Tate’s then husband Roman Polanski, later convicted of rape, and to treat the Manson Family with something like frivolity.

We shan’t upset him by making even vague references to what happens in the final act, but there is much there to enrage those who remain unconvinced by his blasé approach to violence. This does, however, look like a return to form after the tedious The Hateful Eight.