The Hateful Eight review: The wheels come off the wagon 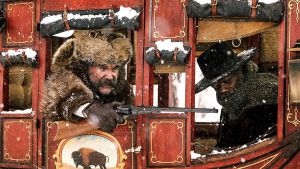 A thumbnail description of “The Eighth Film by Quentin Tarantino” might suggest that he is giving many of his critics what they thought they wanted. After a series of increasingly elaborate quasi-epics, the director looks to have gone back to the chamber drama he exploited to such economic effect in Reservoir Dogs. Indeed, about three-quarters of the new film takes place within the same modestly sized room. Samuel L Jackson, defiant in a lemon- lined greatcoat, plays Major Marquis Warren, a bounty hunter and former Union soldier, who ends up casting beady eyes at a variety of hoodlums in a remote, snow-bound cabin. Tim Roth is a pompous English hangman. Kurt Russell channels John Wayne as John Ruth, a rival bounty hunter. Jennifer Jason Leigh is scruffily vulpine as Ruth’s charge Daisy Domergue. There are the makings of a punchy two-act drama in that scenario.

Unfortunately, Tarantino, who believes too much of his auto-mythology, has stretched the potential to homeopathic thinness while fretting excessively around the decorative edges. The Hateful Eight has an overture. In certain versions it has an interval. An admirable defender of film on film, Tarantino persuaded Robert Richardson, his cinematographer, to shoot on Ultra Panavision 70 using anamorphic lenses with a rare aspect ratio of 2.76:1. Ennio Morricone composes the music. The film lasts nearly three hours.

There is much to enjoy in all this. Morricone’s score combines astringency with sweetness in a way no imitator could manage. Anybody suggesting that widescreen cinematography demands more exteriors misses the point of Tarantino’s celluloid evangelism. The violence is as gooey and abundant as even the director’s most bloodthirsty fans could expect. What a shame the piece is so lacking in character and narrative coherence. What a shame so much of it is so gosh-darn boring.

The Hateful Eight is laden with Tarantino’s usual socio- political provocations. We have become used to his promiscuous bandying of the n-word, but the semi-comic abuse of women in The Hateful Eight is something new. It’s not just that Russell’s fist collides with Jason Leigh’s face too frequently. It’s the way each punch is timed like something from a Tom and Jerry cartoon. The actress is even required to sport the sort of black eye one sees more often in the Beano than in real life.

Set in Wyoming just after the US Civil War, The Hateful Eight is angry about the continuing racial conflict – Major Warren’s showdown with Bruce Dern’s surly Confederate general is particularly salty – but it has nothing new to say about those issues. One would find it easier to look past these deficiencies if the film’s superstructure were a bit sounder. The dialogue plays like a clanging parody of the director’s best work. Every conversation, however insignificant, is stretched to interminable length as the characters repeat and tweak phrases in the manner of stoned students. An attempt to blend elements of John Carpenter’s The Thing with an Agatha Christie mystery is undermined by plotting haphazard enough to shame a Punch and Judy show.

The film’s biggest problem, however, is its unsatisfactory characterisation. Yes, race, gender, class and nationality divide the dramatis personae.

Demián Bichir is hooded as a Mexican dogsbody. Walton Goggins is charismatic as a racist fool who claims to be the new sheriff. But the core actors are – when disguises are stripped away – all essentially playing the same person. Each is cragged, ruthless, venal, suspicious and prone to bursts of the director’s demotic poetry. The problem is not that they are all bad people; the issue is that, with a few variations, they are bad in much the same way. Nobody made that complaint about The Wild Bunch. They didn’t whinge in that way about The Magnificent Seven.

Only the appalling Deathproof rates lower in the Tarantino canon. Pull yourself together, man.