Josh Hartnett: ‘I lived in Dalkey for a while. I loved it. I had a great time’

The 40-year-old actor who returns to Dublin this month for the festival premiere of She’s Missing, has fashioned a fascinating career in the indie movie sector 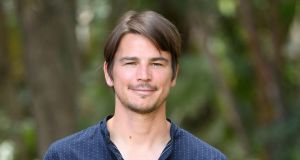 Josh Hartnett: “My heart has always been in the independent sector.” Photograph: Daniele Venturelli/Getty

When Josh Hartnett walks up the red carpet at the Dublin International Film Festival premiere of Alexandra McGuinness’ dreamy movie mystery She’s Missing, it’ll mark a sort of homecoming for the 40-year-old. In October 2013, Harnett relocated to Dublin for the first of three seasons of Penny Dreadful, the hit gothic drama in which he played a Victorian werewolf.

“I spent three winters in a row around Dublin and Wicklow,” he recalls. “It was very dark and very cold. But the crew was very nice and showed me around. I lived in Dalkey for a while. I loved it. I had a great time.”

While working on Penny Dreadful, Harnett met the up-and-coming Irish producer Anna O’Malley, one of three producers who worked on She’s Missing. Shot in New Mexico, the film concerns Heidi (Lucy Fry), an aimless young woman who goes in search of her missing best friend (Alita: Battle Angel’s Eiza González), only to stumble upon a cult led by the Manson-esque Ren (Hartnett).

“There’s a quality to a lot of the characters I’ve offered,” says Hartnett. “They’re unknowable. I think maybe when people see me – because I don’t have a social media presence or Hollywood presence in the way that a lot of actors have – I think that it fits with that unknowability. I do get offered a lot of characters that are loners and outsiders.”

McGuinness’ film, in the tradition of Wim Wenders’ dusty meditations on the American Dream, is very much in keeping with Hartnett’s CV. The actor has recently completed work on Polish auteur Lech Majewski’s sci-fi reworking of Navajo legend Valley of the Gods, and will star as one of three drug-dealing siblings in Anthony Jerjen’s Inherit the Viper.

“So it’s a Swiss director’s take on the opiate crisis in Appalachia,” says Hartnett. “Like with She’s Missing, I find that outsiders’ perspective fascinating.”

It’s not surprising that Harnett has an affinity with outsiders. His exile from the studio system has been entirely self-imposed. He lives between London, New York and his native Minnesota with his English partner Tamsin Egerton and their two children. He only returns to Hollywood for meetings.

“I love films that come together in a very grassroots way,” he says. “I love projects that require everyone to take a step back and think: let’s see what we can do with just a bit of glue and popsicle sticks. I find it very satisfying when projects that don’t have a lot of backing come along and then work out. And I like people that work on the fringes of the industry. I love movies and TV shows that challenge audiences, and it’s more and more difficult to challenge the audiences.”

At the turn of the millennium, Hartnett was the hottest name in the movieverse. Born and raised in Minnesota by his dad, a building manager and jazz musician, and stepmom alongside three half-siblings, he went to New York’s Conservatory of Theatre Arts and Film at SUNY Purchase, with a mind to do something in theatre. Aged 19, he was spotted and cast in the short-lived but highly praised US version of Cracker and as the son of Jamie Lee Curtis’ character in Halloween H20: 20 Years Later.

“I was doing theatre regularly from age 16 back in Minneapolis,” he recalls. “When I went to New York I thought I was going to be in the visual arts. But I love being on stage. I found it an amazing release. And it felt like an evolving art form; it’s never the same thing twice. But I didn’t think of acting as a career option until a manager saw me and asked me if I wanted to audition for some movies. I had $5 to my name so I said: sure, I’ll try it. I ended up coming out to Los Angeles with her. She had an agent lined up and a whole bunch of auditions lined up. I didn’t know how unusual that was. I was 18 years old. I just got very lucky. Who knows what I would have ended up doing otherwise?”

In his early 20s, Hartnett was unimaginatively dubbed Josh “Hot-nett” by the tabloid press as he racked up movie credits in Robert Rodriguez’ The Faculty, Sofia Coppola’s The Virgin Suicides, Tim Blake Nelson’s O, and Michael Bay’s Pearl Harbour. He dated Scarlett Johansson and Helena Christensen. He was one of People magazine’s “50 most beautiful people” in 2002 and was voted PETA’s Sexiest Vegetarian Alive in 2003. And then he seemed to disappear. Conflicting accounts say he was spooked by fame, overwhelmed by his overnight celebrity. He turned down the role of Superman. He turned down Batman. He turned down Spider-Man.

“I was on the cover of every magazine,” he told Details magazine in 2014. “I couldn’t really go anywhere. I didn’t feel comfortable in my own skin. I was alone. I didn’t trust anyone. So I went back to Minnesota and got back together with my old friends – ended up getting back together with my high-school girlfriend for a while – and I didn’t do any filming for 18 months.”

Was there a particular moment or trigger, I wonder? Was it the Dark Knight or Sexiest Vegetarian Alive?

“It wasn’t any particular thing,” he says. “There was just a lot of pressure at the time, especially for a 21-year-old. Some of the movies I was being offered were pretty big and there was already a ton of attention being paid by normal people. I’ve walked away, not quite walked away from working in Hollywood a few times in my career. A few of those times, I’ve written screenplays or worked on smaller independent films.

“I’ve never thought I would make a complete break. I just thought I needed some perspective. That first time I left I was 21 and had worked on Black Hawk Down with Ridley Scott. I think that was my introduction to real poverty and when I went back to Hollywood I felt out of step. I started to think about what I could do with my fame or whatever. So I started a foundation. I wrote a screenplay about my experiences there. And that coincided with me moving back to Minnesota. It felt right to me to go home and spend time with people I love and focus on things that I wanted to do.”

Working largely in the independent sector, the older, wiser Hartnett has fashioned a fascinating career, heading the cast of Tran Anh Hung’s Radiohead-scored neo-noir I Come With the Rain, playing opposite David Bowie and Rip Torn in the dot-com drama August (which Harnett also produced), and essaying former professional hockey player Eric LeMarque in the icy survival drama, 6 Below. He has worked with Harrison Ford (Hollywood Homicide), Samuel L Jackson (Resurrecting- the Champ), Danny DeVito (Girl Walks into a Bar), and Brian DePalma (The Black Dahlia). He tied with Peter Falk for best actor at the 2006 Milan International Film Festival for his work on Paul McGuigan’s Lucky Number Slevin.

“My heart has always been in the independent sector,” he says. “I was only considered by Jerry Bruckheimer and Michael Bay because they saw me in Virgin Suicides. And even the big pictures I did were not typical. 40 Days and 40 Nights was a bizarre script even if it felt a little sanitised by the time it got through the studio. Black Hawk Down had Ridley Scott to get it through, but it’s a really fascinating, multifaceted look at modern warfare. It’s interesting that a studio took it on.”

He must have some very interesting conversations with his agent. What exactly are they looking for?

“I don’t know,” he says. “My agents got something right a couple of years ago when they introduced me to Atsuko Hirayanagi, who directed me in the movie, Oh, Lucy! I don’t know what my agents speak about internally when I’m not there. Maybe: what’s the thing that no one else wants to do? I don’t know how they perceive me. Over the years, I’ve had agents who wanted to put me in very simple and uninteresting roles. But I was never interested in the well-worn trajectory. It’s effective. It makes money. But what you end up making is not necessarily very memorable. And it’s not what I want to do.”

He laughs: “I have ended up moving agencies a couple of times.”

The New Mutants: ‘I kept reading all these articles and none of it was true’
8