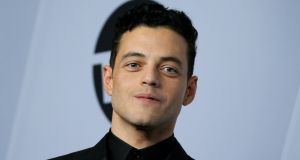 Rami Malek: “My situation with Bryan was not pleasant... And that’s about what I can say about it at this point.” Photograph: Jean-Baptiste Lacroix/AFP/Getty Images

Bohemian Rhapsody actor Rami Malek has said working with director Bryan Singer before Singer was fired from the film was “not pleasant”.

The actor, nominated for an Oscar for his Freddie Mercury role on the Queen biopic, said at the Santa Barbara International Film Festival: “In my situation with Bryan, it was not pleasant, not at all. And that’s about what I can say about it at this point.”

Asked at the film festival about sexual misconduct claims against Singer, which were not cited as the reason for Singer’s firing from helming the film, Malek said his heart goes out to all people who have been affected by such misconduct.

“My heart goes out to anyone who has to live through anything like what I’ve heard and what is out there. It’s awful, it’s remarkable that this happens, I can appreciate so much what they’ve been through and how difficult this must be for them. In the light of the #MeToo era that this somehow seems to exist after that, it’s a horrible thing.”

In previous interviews, Malek has said he had “creative differences” with Singer and “it was a tumultuous set”. – PA

The Books Quiz: Who wrote The Naked Lunch?
Real news has value SUBSCRIBE