Review: For no good reason, Jennifer Connelly does a whole scene in her exotic undies

Trailer for the James Cameron and Robert Rodriguez blockbuster. 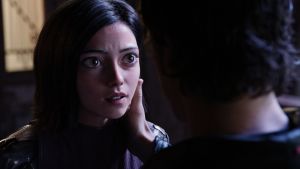 Alternative universes provide film-makers with the opportunity to wind new cultures and new philosophies about architectures that stretch the limits of imagination. Well, that’s the idea.

Robert Rodriguez’ much delayed adaptation of a popular Japanese manga ends up in all the usual places. Future kids again ape the styles and habits of Californian skate culture. Society hangs around a violent sport like that in Rollerball or Death Race 2000. Everybody’s greatest aspiration is to end up wearing an ankle-length leather greatcoat.

Why bother with speculative fiction if your speculations are so deadeningly unsurprising? You’ll find more startling dystopias in the average Ken Loach film.

Then again, is dystopia really the word? The picture begins with Dyson Ido (Christoph Waltz) – an eighth-hand Geppetto – discovering bits of a discarded female cyborg on a trash heap. He takes her back home, twiddles with her circuits and turns her into the titular Alito (Rosa Salazar).

Before too long she’s scurrying around the busy streets of Iron Town – a multicultural metropolis with lovely eclectic architecture, shops that dispense chocolate bars the size of suitcases and technicians who can repair damaged humans to near immortal efficiency. Remind me again why everyone so wants to flee Iron Town and join the city that floats in the sky above.

No, don’t ask questions. Alito is forever asking questions and then being stuck with endless explanations as to how the place works and who belongs to what subculture. There is so much boring world-building in Alita Battle Angel that few characters have time to maintain their skateboards or launder their ankle-length leather greatcoats.

The film was a pet project of James Cameron, but, though he shares a writing credit, directorial duties have eventually ended up with the hard-working director of El Mariachi.

It’s a sloppy, childish production that makes irresponsible use of its reportedly enormous budget.

Mahershala Ali is more robotic than the robots. This wasn’t supposed to happen any more, but, for no good reason, Jennifer Connelly is asked to do a whole scene in her exotic undies.

The less said about the central character the sooner the screeching nightmares can stop. Alita’s enormous, loris eyes are supposed to suggest otherness, but, rather than the otherness of digital life, they suggest the otherness of crying children in the faux-paintings they used to sell in Woolworth’s.

After enduring two hours of this twaddle, we learn that we have been watching an origin story for a character the creators expect to resurface throughout the coming decade. Good luck with that. I’m not holding my breath.

Hannah Lynch: ‘the most gifted woman Ireland ever produced’
10