Pierce Brosnan: ‘It was a great irony playing a British cultural icon as an Irishman’ 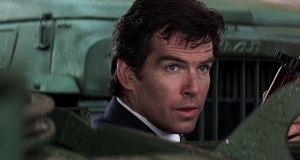 The first film I saw when I came to London as a boy was Goldfinger, which starred Sean Connery as 007. In Ireland, I had been brought up on a diet of Old Mother Riley and Norman Wisdom, so it was a bedazzling moment, seeing this lady covered in gold paint. I ended up getting a toy car with an ejector seat, but I didn’t have any aspirations to be James Bond. The character who really captured my imagination was Oddjob, Goldfinger’s bowler-hatted henchman.

I was originally offered the role of 007 for The Living Daylights. I’d done all the photos with the iconic gun pose and my late wife and I were about to toast our new life with a bottle of Cristal when my agent called and said: “It’s fallen through.” It was because I couldn’t get out of Remington Steele. The role went to Timothy Dalton instead but, by the mid-90s, the franchise had been dormant for six years because of a rights dispute. I heard rumblings that the part was available, but ignored them because I didn’t want to put myself back in that emotional vortex. Then I met the producers Cubby and Barbara Broccoli and, a week later, they called and said: “You’re in.”

The sceptics were out in full: the world felt there was no need for another James Bond. So the challenge was enormous. I didn’t want to get caught between what Sean and Roger had done. Yet, at the end of the day, my take was a little bit of what both had brought to the role. I leant towards Sean’s style, but I couldn’t deny Roger because GoldenEye was in the tongue-in-cheek style people had become used to.

It was a demanding role, physically and emotionally. I did a lot of wirework and fight sequences. They created a padded cell for the fight in the bathhouse with Xenia Onatopp (Famke Janssen), so we could go at it pretty hard. The most arduous fight was the one with Sean Bean, on the ladder over the giant radio telescope at the end. He and I spent six weeks constructing the sequence, working on it during our lunch breaks and at the end of the day with a stunt co-ordinator. But carrying myself as Bond was as much a mental as a physical thing. You have to hold the stage. You go in to win, full tilt to the finish line.

GoldenEye’s success was a great relief. I was prepared for the attention. Once you have that brand, you’re stamped as a Bond. It was a great irony playing a British cultural icon as an Irishman. I had a quiet chuckle to myself.

It’s exciting breaking in a new Bond. I did Daniel Craig’s first one, too. You’ve got something to work with. The producers had been checking other people out just in case. I think they may have looked at Mel Gibson and Ralph Fiennes. But it was obvious Pierce was the right person. You couldn’t get a better-looking Bond. Put him in a tuxedo and it’s game over, mate.

It was budgeted at $55m, which is ludicrously little by today’s standards. I think United Artists had doubts about how the audience would respond after the big gap since the last film. The press had been asking if Bond was still relevant. We decided we had to address this, so we introduced Judi Dench as M, and had her call him a sexist, misogynist dinosaur. The girls, too, were very independent – in the past, they always hung on to Bond’s coat-tails. I loved Famke Janssen’s orgasmic thigh-crushing as Xenia Onatopp.

With Bond, we used to say: “What’s never been done before action-wise?” It’s quite difficult after 16 films. GoldenEye’s bungee jump off a dam at the start was my idea. We used the Contra dam in Switzerland, which is bloody terrifying. There was no digital manipulation: the stuntman Wayne Michaels just did the 700ft jump. As they were doing the countdown, he saw the guy on the crane crossing himself. He did it perfectly the first time. I guess he didn’t want to do a second.

We were getting very tight on budget by the time we got to the tank chase through the streets of St Petersburg, so we built replica streets in the studios at Leavesden. We had three or four Soviet battle tanks, T-55s, the proverbial unstoppable force. You just let the bloody thing go and it knocks anything down. One crashed through a wall, ran over a Panavision camera and flattened it. A couple of companies turned us down for the bit where it smashes through a drinks truck. Perrier ended up getting a good ad out of it. GoldenEye was probably the first Bond film to really cash in on product placement.

I turned down Pierce’s subsequent Bond films. There’s always a madman taking over the world and a control room that has to be blown up. The producers felt the last of the Brosnan Bond films, Die Another Day, had got too fantastical, with the invisible car and the ice palace. They decided there had to be a complete rethink. That’s how Casino Royale came about. – Guardian