If Beale Street Could Talk: A seductive, exemplary movie

Review: Barry Jenkins’s third film is least as good as his Oscar-winning Moonlight 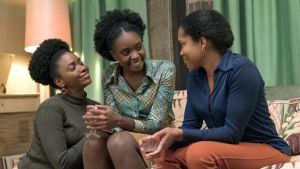 Everyone has their own pick for a film that underperforms each awards season, but the failure of Barry Jenkins’s third feature – at least the equal of his Oscar-winning Moonlight – to secure the big nominations really is a puzzle.

If Beale Street Could Talk is, perhaps, just a little too beautiful. Every sock and collar is in harmony with every drape and tablecloth. Nicholas Britell’s soundtrack could hardly be more achingly persuasive.

Maybe that aesthetic perfection works at too awkward an angle to the political anger that fires the drama. Adapted from a James Baldwin novel of the same name, If Beale Street Could Talk follows a New York couple caught up in the malign jumble of legal evasions and societal dishonesties that worked to constrain African-Americans in the 1960s (and do now).

You don’t expect to see these arguments made through a cinematic language derived from Wong Kar-wai and Jacques Demy. Yet here we are. Jenkins’s film is every bit as engaged as Sorry to Bother You or BlacKkKlansman, but, unlike those defiantly abrasive films, it also soothes and seduces. No wonder it’s caused some confusion.

Tish (KiKi Layne) and Fonny (Stephan James) have been friends forever and lovers for some time. Told in non-linear (though lucid) fashion, the film doesn’t exactly have a beginning, but the thin end of its wedge is Fonny’s arrest for rape and Tish’s subsequent realisation that she is pregnant.

The news causes, among the families, a rare outbreak of explicit violence in a film whose menaces are more often hooded or implied. There are more flailing fists and careering insults than you’d expect from in-laws at a similar bash in EastEnders. But nobody doubts that Fonny is innocent and, as events progress, we discover that he has been caught up in an all-too-believable sidewalk conspiracy.

Jenkins’s greatest achievement here is to marry frustration at America’s baked-in racism with a belief in the power of human decency. This is a film about good people in terrible situations. Sharon, in particular, develops as a model of resilience and determination – prepared to plead when necessary without losing an ounce of dignity. King owns the role.

The film-makers are assisted by a source novel that makes its presence felt in swathes of mellifluous voice-over. Jenkins perhaps overdoes the reverence for Baldwin’s text. No viewer entering without foreknowledge would be left in any doubt that they were watching an adaptation.

Yet the film remains exuberantly cinematic in a way that few such faithful genuflections manage. Jenkins has his characters lock each other’s eyes and then lock those eyes with the camera. The intimacy is unsettling: Tish radiates adoration; the cop sweats out malignity; Sharon spreads determined kindness.

Those fictions are seasoned with archive photographs that remind us of real-life horrors unfolding throughout the decade.

The exemplary work from cinematographer James Laxton (caramel on stained class), editors Joi McMillon and Nat Sanders (relaxed rhythms) and composer Nicholas Britell (breathy jazz working with found pop tunes) all deserve individual mention, but it is the massed harmony – with the costume design sounding undercurrents – that sets Beale Street aside as a technical marvel. Jenkins talks of offering “an aesthetic contract to the audience”. There is no good reason not to sign on the dotted line.