All is True: Kenneth Branagh’s salty take on Shakespeare

Review: An odd but charming film about the ageing playwright’s twilight years 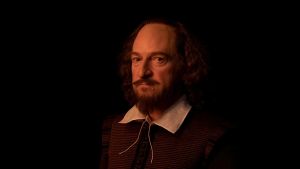 Film Title: All Is True

There has never before been an oddity quite like this agreeable film. Yes, there have been dramas about the life of Shakespeare. (One of those beat Saving Private Ryan to the Oscar 20 years ago.) Edward Bond’s fine play Bingo deals with the same period – isolated contemplation in autumnal years – addressed here in Kenneth Branagh’s less abrasive film. That’s not it. This must surely be the first time a screenwriter has moved characters straight from a sitcom to a relatively sombre film.

Fans of Ben Elton’s unexpectedly amusing Upstart Crow (and Shakespeare scholars) will have some idea of the set-up. The great man (Branagh in Cyrano’s nose), following a fire at the Globe Theatre, has retired gloomily to Stratford with his wife Anne (Judi Dench) and his unmarried daughter Judith (Kathryn Wilder).

The film, like the series, highlights the contrast between Shakespeare’s life as an urban celebrity and his position as a nouveau riche, west-midlands squire. Both entities wonder how the death of his only son might have coloured his later work and soured his final years.

There is humour here and there is even a little knowing anachronism (Elton’s speciality when treating the past). In one odd scene, we see Shakespeare wearily deflecting the sort of repetitive questions that fans fling at celebrities on contemporary social media.

The film-making is not always subtle. We get an actual swan of Avon early on

But for the most part this is a responsible, balanced drama concerning the perils of unfettered contemplation in later life. As Shakespeare digs his garden, he fails to process accumulated regrets or push away ancient sorrows.

Without wishing to be ungallant, we can’t entirely ignore the eccentric casting of Dench. Whereas Anne Hathaway was eight years older than Shakespeare, Dame Judi has over a quarter of a century on Sir Ken. No matter. The increased age difference – explicit nowhere in the text – adds greater poignancy to the emotional separation between the couple and adds power to their eventual coming together.

The film-making is not always subtle. We get an actual swan of Avon early on. Certain long takes seem held just for the sake of it.

But this is a charming, surprisingly salty take on a story that – the works mentioned in the first paragraph notwithstanding – is told less often than one might expect.

I did miss the Brum accents from Upstart Crow, though.

The highest-paid actors of 2019 revealed
6

‘In five seconds my life changed. I was worse than the worst jazz snob’
10