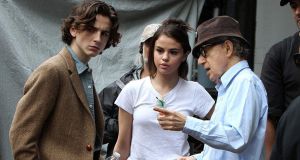 Timothée Chalamet and Selena Gomez with director Woody Allen on the set of A Rainy Day in New York. The film has just been unveiled in Poland. Further releases are planned, but there is no sign of it emerging in these territories.

“Cancel culture” is not a real thing. It’s a side-project for bores who spend the rest of their days whingeing about “snowflakes”. Right? Or is “cancel culture” propelling us towards a new Puritanism? Sorry to go all Centrist Dad, but the truth is somewhere in between.

Last week a review for the most recent Woody Allen film emerged. “A Rainy Day in New York is hardly top-tier Allen,” Matt Thrift of Little White Lies mused. “But it’s a shame that such wonderful performances are unlikely to receive the wider attention they deserve.”

Hang on a moment. Wasn’t A Rainy Day in New York formally “cancelled” along with everything else associated with that director?

A characteristically tweedy comedy starring Timothée Chalamet and Selena Gomez, the picture went into production as #MeToo gathered pace. Attention returned to the accusation, made in 1992, that Allen had sexually assaulted his adoptive daughter Dylan Farrow. The undisputed intelligence that he had married his former partner’s daughter further poisoned conversation around the picture.

By late 2018, when Rainy Day finished post-production, the atmosphere was so altered that the film seemed unsalable. Amazon Studios, with whom Allen had a four-picture deal, shelved the release and sat back to enjoy the incoming lawsuit. Now, that’s what I call “cancelled”.

Yet here it is? Well, there it is. Here it still isn’t. Following the return of certain rights to Allen, the film has just been unveiled in Poland. Further releases are planned, but there is no sign of it emerging in these territories.

“Cancellation” is not a binary concept. It happens along a spectrum. At one end, we have the still unemployable Kevin Spacey. Despite recent defence by Dame Judi Dench, Spacey remains stranded on an outer dwarf planet of the cinematic universe.

At the other end of the spectrum are figures like Quentin Tarantino. A recent, faintly desperate article in the Guardian, addressing controversies concerning Uma Thurman, sought to explain: “why it’s time to cancel Quentin Tarantino”. It didn’t mention that Ms Thurman, whose daughter is in Once Upon a Time In Hollywood, recently wished the film well on Instagram. For all the controversies, Quentin is “cancelled” in only the minds of his most vigorous detractors.

Allen sits a bit closer to the Spacey end than the Tarantino end. He has managed to drag up some European financing for his next film, but, now 83, he seems unlikely to ever again find welcome in the US industry.

This spectrum has been at work throughout Hollywood’s history. The professional defenestration of Fatty Arbuckle was just the most notorious in a long line of differently pitched cancellations. Some deserved what was coming to them. Others did not. The collective bout of politically motivated cancellation during the McCarthy era still shames the industry.

Something has, however, changed in the current century. The different cases of Allen, who still disputes his stepdaughter’s allegations, and Roman Polanski, who pleaded guilty to rape in 1977, demonstrate how the past is now up for vigorous reassessment. Little new evidence has emerged in either case, but, following the shift in attitudes that came with the Harvey Weinstein revelations, Allen’s relationship with Amazon was severed and Polanski was expelled from the Academy of Motion Picture Arts and Sciences.

There is a reasonable case to wise up and stop making excuses for the likes of Polanski. Too many female directors were edged out of the industry while, in the boys’ club, abusers massaged each other’s hairy shoulders. More worrying is the tendency to re-evaluate and retrospectively write off previously admired movies or whole careers.

The icky relationship at the heart of Allen’s Manhattan now seems ickier than ever, but Crimes and Misdemeanours, Broadway Danny Rose and Hannah and Her Sisters – all of which offered strong roles to women – have lost little of their appeal. Polanski classics such as Repulsion and Chinatown could hardly seem any creepier than they did on release. That was the attraction.

The end-of-decade polls have already begun. Late last month, IndieWire, an influential movie site, released its opening sallies. No Woody Allen film made the top 100. Following scandals concerning the director’s treatment of his two leads, Abdellatif Kechiche’s Blue is the Warmest Colour, winner of the Palme d’Or in 2013, was nowhere in best film or, more surprisingly, in the list of best performances. That feels a little like cancellation.

Perhaps Léa Seydoux and Adèle Exarchopoulos, so astonishing as lovers in that film, would approve, but posterity has a way of distancing work from the sins of its creator. Few would cross Charles Dickens from the canon for treating his wife so appallingly. HP Lovecraft’s stories are no less addictive for their creator being a Grand Cru racist. Mind you, neither now lives to profit from our buying their books. Perhaps that’s the distinction that matters.

Terry Jones, Monty Python star, dies at the age of 77